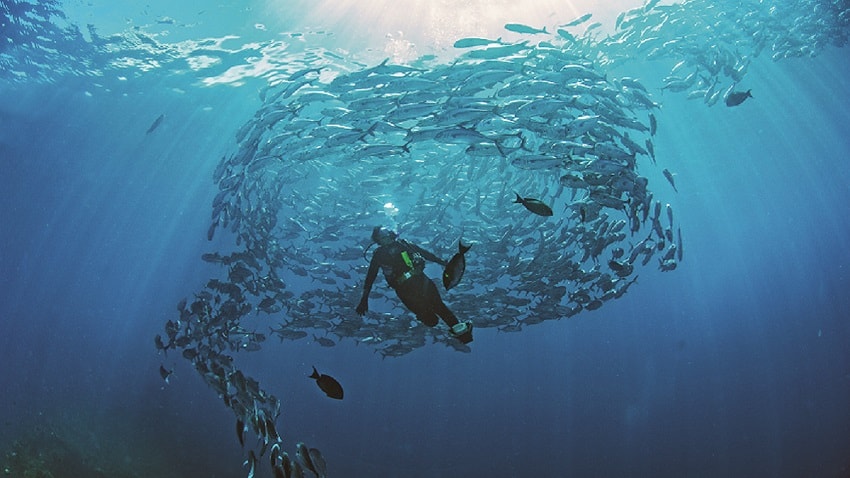 A century ago the German biologist Jakob von Uexküll coined the term umwelt – literally “surrounding world” – as a way of capturing the way different organisms inhabit different realities, each defined by their particular sensory world.

The world of a fish, its umwelt, is radically different from our own. Fish inhabit a liquid environment, a weightless world of currents and eddies, and like birds in the air, float in three dimensions rather than the two-dimensional world ground-based animals like ourselves take for granted (although their awareness of depth is extremely acute, presumably because of the potentially fatal consequences of misjudging pressure).

Their sensory worlds are also far richer than ours. Although the basic physiology of fish and human eyes is similar, many fish possess extra receptors granting them tetrachromatic vision, and allowing them to see wavelengths we cannot.

In some – especially freshwater fish – this allows them to see into the infra­red, making it easier for them to see in the muddy, red-shifted waters of rivers and lakes. Others are able to see ultraviolet light and some can detect polarised light. Some even have visual worlds that change across the course of their lives: the eyes of salmon, for instance, are calibrated to see blues better when they are in the ocean and reds better when in freshwater.

Most fish also have excellent hearing: the American shad is able to hear sounds up to 180,000 Hz, nine times the range of human hearing, presumably so they can detect the ultrasonic vocalisations of the dolphins that predate them, while other fish use infra­sound to assist with migration, allowing them to hear the subterranean rumble of the tides and the movement of water as it breaks and flows against underwater terrain and the shore.

Alongside hearing and vision, fish also use chemoreception to smell chemical traces in the water around them. In most cases this is done using cells in the nostrils, although some species, like catfish, have receptors spread across their entire bodies, allowing them to taste anything they touch.

These chemoreceptors are often extraordinarily acute. Sometimes they are used for hunting. Sharks, for instance, can detect blood in amounts as low as one part in a million, allowing them to scent prey over long distances; an indication of the importance of this ability can be found in the fact that in great whites an astonishing 14% of their total brain mass is devoted to olfaction. Chemoreceptors also play an important part in migration: salmon learn the smell of stream in which they are born; later they follow the threads of that scent back to the same stretch of river.

Some fish also inhabit sensory dimensions entirely alien to our human experience of the world, possessing magnetoreceptors that allow them to follow the lines of force generated by Earth’s magnetic fields or the ability to sense minute electrical currents. Even more significantly fish are able to sense changes in pressure and water movement using specialised cells along their lateral lines. Known as neuromasts, these cells resemble tiny hairs encased in gel, and assist with schooling behaviours, allowing fish to respond almost instantaneously to the movements of other fish, even in the dark.

Can we even start to comprehend such a radically different way of being? After all, many of us struggle to imagine our way across lines of gender or culture. What must it be like to exist in a world where magnetic fields have dimension? To be able to see the direction of light, or extend the boundaries of your body’s perception by registering changes in pressure, or tiny movements of water? Or to be part of a school, moving in unison, one body amongst many?

Faced with the problem of such radical subjectivity, many philosophers have argued our minds simply cannot comprehend such fundamentally different ways of being in the world. Ludwig Wittgenstein suggested that “if a lion could talk we could not understand him”; likewise Thomas Nagel argued consciousness was essentially subjective, meaning that not only is it impossible to reduce the experience of consciousness to a purely material explanation, but – in an echo of Uexhüll – that there is no such thing as objective experience.

Yet even if we accept we can never truly know, perhaps there are ways of at least beginning to intuit these other ways of being. Fish fall for many of the same visual illusions as humans, suggesting similarities in our visual processing, and open-source software now exists that allows ecologists to simulate the visual experience of other organisms. Similarly, we share behaviours: sociality, curiosity, memory, even culture. Perhaps it could be as simple as actually beginning to look, to try to see them for themselves.

James Bradley is a novelist and essayist. This is an excerpt from his feature article in the latest edition of Cosmos magazine which was supported by a grant from the Copyright Agency’s Cultural Fund. You can subscribe to Cosmos here.

Originally published by Cosmos as Do fish dream?