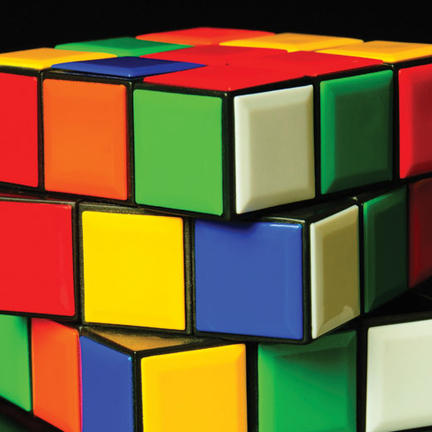 The joy puzzle lovers derive from solving a good puzzle is matched only by the frustration felt by those of us who are not good solvers. 2015 marked the 40th anniversary of the patenting of perhaps the greatest – and most difficult – puzzle of the 20th century, the Rubik’s Cube.

In 1974, Ernő Rubik was living in Budapest and teaching design courses at the Academy of Applied Arts and Crafts. The cube’s beginnings are unclear, but some reports state a project given to his students inspired Rubik’s prototype which was then refined over about six weeks. He created a plastic cube with six different colours, one for each face, with each face divided into a 3×3 grid. The beauty of it was that each face could turn independently thanks to an internal mechanism of 21 parts moving on curved tracks.

He had considered the cube to be primarily a work of art, until he scrambled the colours. Realising how difficult it was to restore each face to a single colour, Rubik discovered he’d created a puzzle. It took him more than a month to work out how to solve it. Initially, Rubik wasn’t even sure a solution was possible. Eventually he hit upon the idea all modern solutions are based upon – certain moves exist that will exchange pairs or triplets of edge or corner pieces without disturbing the remainder of the cube. This convinced him to go ahead with his marketing plans. In 1977 production began within Hungary.

Puzzle crazes have periodically captivated the world since the early 1800s. The “Chinese Tangram” puzzle was wildly popular from about 1815 until the 1820s, with plastic sets still available. In 1880 the “15 Puzzle” was all the rage in Boston and eventually spread to Europe before fizzling out after about six months. Rubik played with the 15 puzzle as a child and says he was possibly inspired by it. More recently, Sudoku went from an obscure game to a multi-million dollar industry. But none of these puzzles captured the world’s attention like the Rubik’s Cube.

Rubik’s original cube is at once elegant and fiendish.

Rubik called it the “Magic Cube”. The first run of 5000 sold out in a few months. In 1978 the cube was a hit at the International Congress of Mathematicians and over the next several years won awards at European toy fairs. By 1980, the Ideal Toy company in the US was marketing the puzzle as “Rubik’s Cube”. It sold about 4.5 million by the year’s end. In 1981 numbers were approaching 80 million units worldwide.

By the mid-1980s the craze had passed. The cube inspired follow-up puzzles such as the 4×4 “Rubik’s Revenge” and the 5×5 “Professor’s Cube”. These days, models of 6×6, 7×7 and even higher-order cubes can be found in puzzle stores. Computer simulations of cubes up to 100×100 are available online.

Rubik’s original cube is at once elegant and fiendish. Puzzle expert Jerry Slocum says rotational cube puzzles are among the most difficult of all manipulative puzzles. On the standard 3×3 cube there are 43,252,003,274,489,856,000 possible arrangements.

In 1978, while the cube was still an underground success, physicist Roger Penrose and mathematician John Conway were demonstrating solutions. Conway was said to be able to solve the cube in around four minutes without consulting notes. In 1979 David Singmaster offered a guide to the perplexed with his Notes on the Magic Cube. It led to a popular standardised notation for solving the cube which survives today. Up, Down, Front, Back, Left and Right faces are represented by U, D, F, B, L and R. A sequence to manoeuvre a corner piece into position might be written out as: R U R`. This corresponds to a clockwise twist of the right face, followed by a clockwise twist of the up face, and finally a counter-clockwise twist of the right face. The accent mark denotes a counter-clockwise twist. Although these solutions appear daunting, with a cube and instructions in hand most readers will be able to solve the puzzle in half an hour or so. Practice will soon get your times down to five to 10 minutes.

Using such algorithms, competitors have reduced the solution time to under a minute. The world record is 5.55 seconds held by Mats Valk of the Netherlands. There are also blindfold and one-hand categories. Blindfold solving has the competitor examine the cube and memorise the solution before putting on the blindfold. The final time includes the examination period and the hands-on time. If you’re feeling like a challenge, the record is just over 23 seconds.