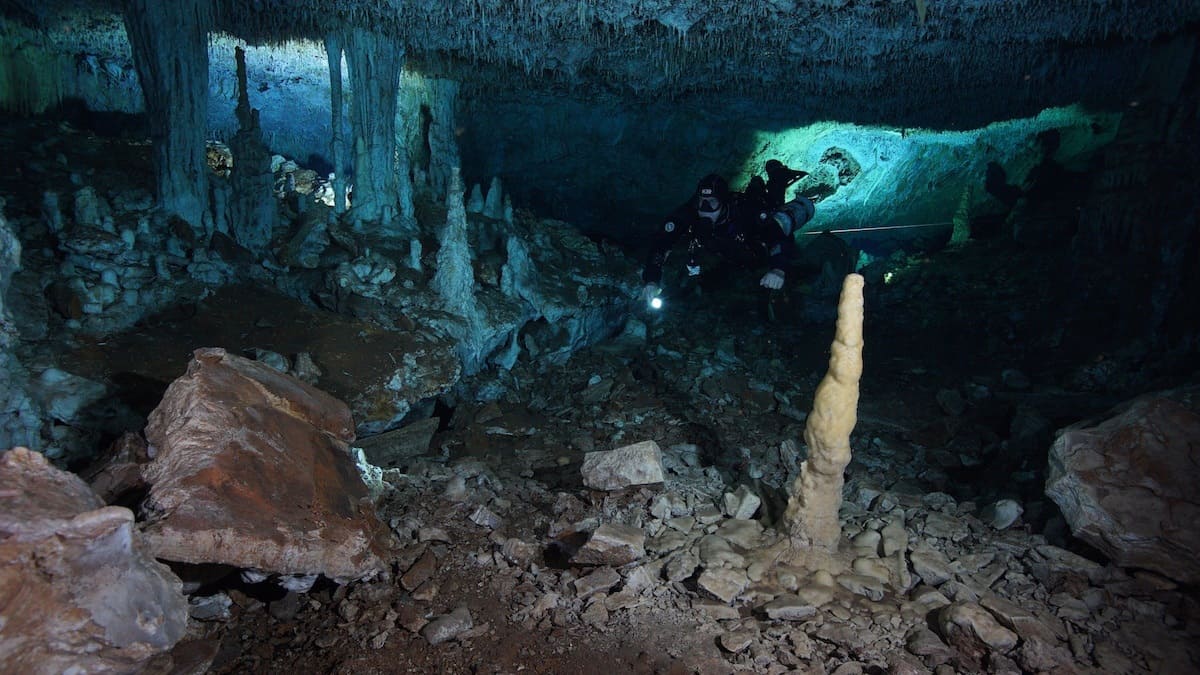 A diver in what researchers say is the oldest ochre mine ever found in the Western Hemisphere. Credit: cindag.org

Red ochre was so valuable to the Paleoindians of the early Americas that they were willing to risk their lives to collect it, new research suggests.

And discovering that wasn’t without its own challenges. The Camilo Mina, Monkey Dust and Sagitario cave systems that were dry and accessible during the Last Glacial Maximum have long since been submerged beneath Quintana Roo on Mexico’s Yucatan Peninsula.

It was known that the region’s early inhabitants travelled deep into the caves – human remains have been found there – but not why.

Now a team of US, Mexican and Canadian researchers thinks it has some answers. Writing in the journal Science Advances, it reports the first evidence of Paleoindian cave mining in the Americas.

“The sophistication and extent of the activities demonstrate a readiness to venture into the dark zones of the caves to prospect and collect what was evidently a highly valued mineral resource.”

The researchers are not certain how the ochre was used but say evidence from other parts of North America suggest it had value as an antiseptic, sunscreen or vermin repellent, or for ritual and symbolic purposes such as funerals or art decoration.

The natural clay earth pigment was used as paint for thousands of years worldwide.

The research was led by Brandi L MacDonald from the University of Missouri, US, and included scientists from Mexico’s Centro Investigador del Sistema Acuífero de Q Roo (CINDAQ).

From this they determined that the ochre samples contained high-purity iron oxides, producing a vibrant, fine-grained mineral pigment.

They also identified the age and duration of mining in La Mina and Sagitario through radiocarbon dating, the presence of calcite formations that form after mining, and the documented sea-level rise record, determining that mining in the western part of the cave system occurred between 11,400 and 10,700 years ago.

“Now that we are alerted to underground ochre mining and its archaeological signatures, additional discoveries are certain to be made in the nearly 2000 kilometres of known cave systems…,” the authors write.

Originally published by Cosmos as Understanding the allure of red ochre