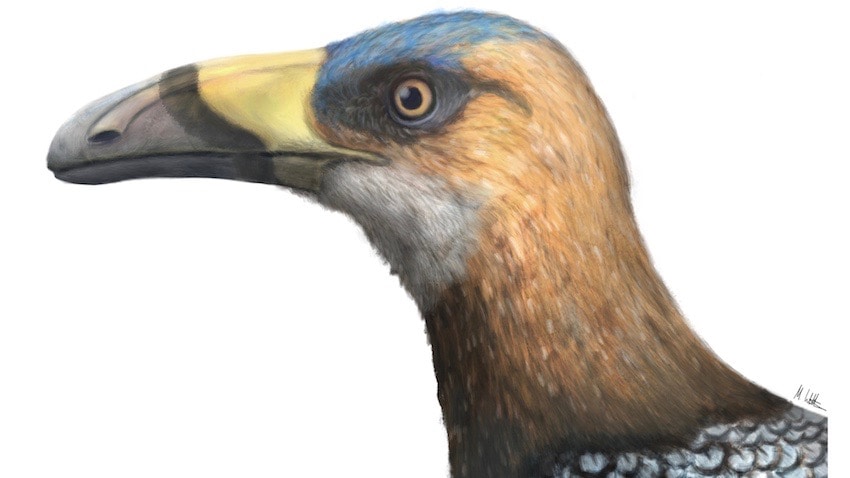 A new fossil discovered on the ever-surprising island of Madagascar suggests ancient Mesozoic bird beaks and faces were more diverse and evolved differently than previously thought, scientists report in the journal Nature.

Long and deep, the beak resembles that of modern crown birds such as toucans. It belongs to a previously unknown species named Falcatakely forsterae, referring to its sickle shape, from the late Cretaceous epoch around 70 to 68 million years ago.

Although it appears quite unremarkable on the surface, the researchers say, a careful reconstruction revealed the bone structure is unlike those of any dinosaur – bird or otherwise. Its facial anatomy bears resemblance to modern birds but its cranium and upper jaw are similar to that of flightless theropods.

The discovery upends what we know about bird evolution, as current species such as toucans and hornbills seem to have independently evolved similarly shaped beaks tens of millions of years later, according to lead author Patrick O’Connor from Ohio University, US.

“Mesozoic birds with such high, long faces are completely unknown,” he adds, “with Falcatakely providing a great opportunity to reconsider ideas around head and beak evolution in the lineage leading to modern birds.”

More than 11,000 species of birds exist today, with a complex evolutionary history harking back to the dinosaurs – their only branch that survived the last mass extinction. Intriguingly, it was the beaked birds that persisted.

The exquisitely preserved Falcatakely fossil skull – only 8.5 centimetres long – was embedded in rock in the Mahajanga region of Madagascar, the second Cretaceous specimen the team has found there.

They used high resolution micro-computed tomography and complex digital modelling to dissect individual bones virtually and used 3D printing to reconstruct the skull and compare it with other species.

The formation of modern bird beaks is very precise, mostly by a large bone called the premaxilla, while their dinosaur ancestors have fairly unspecialised noses consisting of a small premaxilla and large maxilla.

One of the new fossil’s surprises was evidence of both features.

“Falcatakely might generally resemble any number of modern birds with the skin and beak in place,” says O’Connor. “There are clearly different developmental ways of organising the facial skeleton that lead to generally similar end goals.”

Daniel Field, from the University of Cambridge, highlights the importance of such fossil discoveries for building evolutionary models in a related commentary, noting the “stunning” specimen’s surprisingly unique skull.

“Although the fossil consists of only the front half of a skull, it’s clear that Falcatakely is more than just a pretty face,” he writes. “The skull is utterly bizarre, characterised by a deep and elongated snout unlike those seen in any other Mesozoic birds.”

Field goes on to note a tooth on the snout and an absence of teeth along the skull’s jaws, in direct opposition to the closest Cretaceous relatives of modern birds.

“These features give the skull of Falcatakely an almost comical profile – imagine a creature resembling a tiny, buck-toothed toucan flitting from branch to branch, occasionally glancing down at Madagascar’s formidable Late Cretaceous inhabitants,” he writes, “which included equally bizarre mammals and giant predatory dinosaurs.”

The new species is in good company with other bizarre creatures on the island, such as Simosuchus, a pug-nosed, herbivorous crocodile, Beelzebufo, a giant predatory frog, and the recently discovered “crazy beast” Adalatherium.

“The more we learn about Cretaceous-age animals, plants and ecosystems in what is now Madagascar,” says O’Connor, “the more we see its unique biotic signature extends far back into the past and is not merely reflective of the island ecosystem in recent times.”