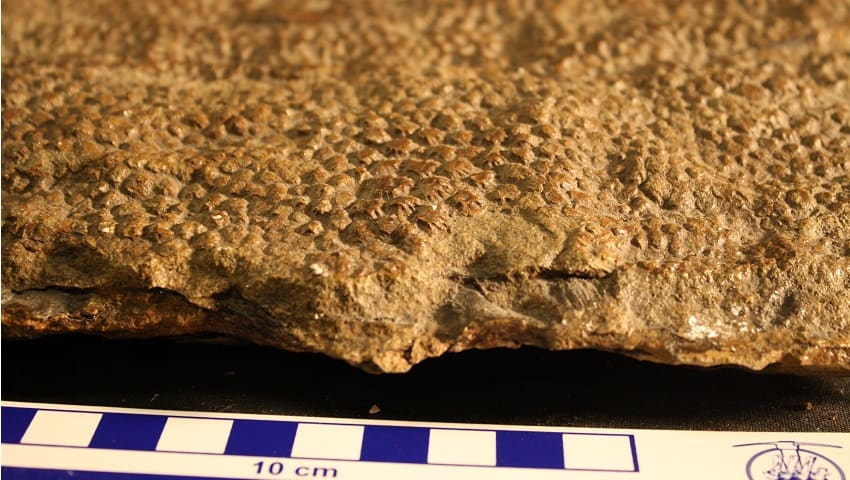 All manner of unusual jobs exist in science, but perhaps one of the most remarkable is the expertise of Phil Bell, of the University of New England.

Bell is a dinosaur-skin specialist, a field so niche that he’s the only person in Australia who can claim the title. This type of specialisation doesn’t even have a name, although Bell jokes that it could be “palaeodermatologist”.

What draws somebody to such a distinctive topic? “When I was visiting museums in Canada I found drawers full of dinosaur skin that nobody had looked at for 100 years and realised how unusual they were,” he says. “That really captured my imagination, so I sort of just fell into it.”

These days when we think of dinosaur skin, we often think about feathers. Feathered dinosaurs catch the imagination as an audacious and glamorous vision of long-extinct animal types. It’s a beautiful picture, but it doesn’t represent most dinosaurs.

“The reality is that only a small proportion had feathers – the majority had scaly skin,” says Bell. It’s a fact he finds far from discouraging: “There has been an assumption that dinosaurs are just big scaly reptiles. In reality, they are complex and do fascinating things that help them interact with their environment.”

Much is lost when we only consider what lies beneath the surface. Skin can reveal minute adaptations that explain a lot about their environment and how they were suited to it. With skin, “You give yourself a whole new way of investigating their way of life,” Bell says.

Take modern animals as an example. The tooth-like structures that cover a shark’s body help with streamlined swimming, so we can infer that another creature with similar skin may live underwater. Likewise, human skin changes in thickness and stretchiness depending on where it is on the body, to accommodate how we use those different parts. If the skin on the fingertips of one hand is tougher, it’s possible to infer that the hand belongs to a guitarist, or someone who uses tools regularly.

In the same way, dinosaur skin can reveal how that creature interacted with its environment and the climate in which it lived. One of Bell’s highlights concerned a mummified hadrosaur from Canada, the exquisitely preserved skin of which included a fleshy head crest. This rare discovery allows scientists to paint a more accurate picture of what the hadrosaur looked like and how it may have navigated its environment.

For a dinosaur skin specialist “most of my day is reading and writing and looking through images of dinosaur skin I have collected or have been sent to me by colleagues,” says Bell.

Bell also supervises students, lectures, and conducts field work in Canada and Lightning Ridge, in north-western New South Wales, where he can uncover new fragments of skin, bone and fossil.

It’s not an easy field. Skin is fragile and often missed, which means it only has a very short history when it comes to scientific research. “Until very recently, there was literally no dinosaur fossil skin found in Australia,” Bell says.

Its fragility and a dismissive attitude towards it has meant skin is often either lost or damaged before it even has the chance to reach Bell, who says one of the hardest things about dinosaur skin is how difficult it is to recover.

“There is [often] not a huge amount of skin left, or it is damaged during excavation,” he says. “Sometimes it has been removed from the bone so the original placement is lost.”

Dinosaur research has already been greatly changed by new technologies, and Bell believes this will be no different in his nascent field. In fact, many tried and true palaeontology technologies are yet to be utilised in dinosaur skin science. “Even some of the most commonly used practises have never been applied to the study of skin,” says Bell. “That is something I am trying to change.”

He uses common techniques such as microCT scanning and histology slides to study the microscopic structures of dinosaur skin, in combination with powerful chemical analysis. This reveals those subtle and minute adaptations that elude the naked eye.

Ultimately, it’s the potential for more work and more understanding that explains why Bell chose such a particular field: “I just enjoy the novelty of doing something other people haven’t done. Palaeontology is an old field that focused on bones. This is a chance to start from scratch.”