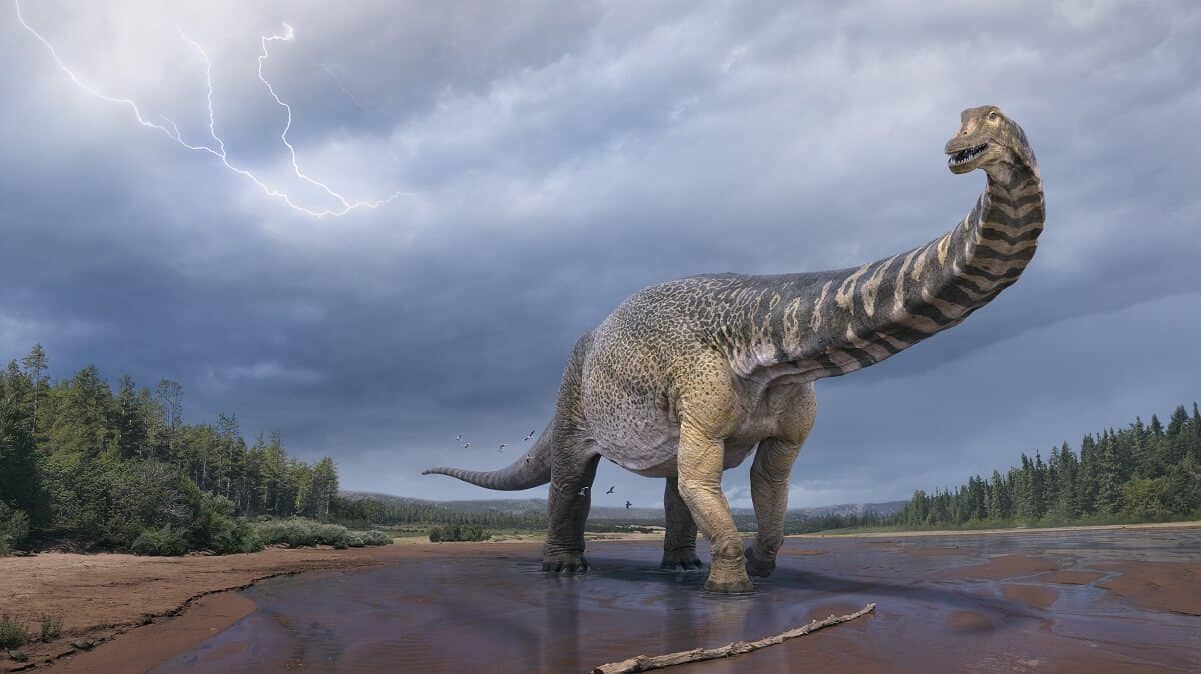 Nicknamed “Cooper”, the long-necked, plant-eating giant walked the earth around 90 million years ago. Fossils of this species were first discovered in 2007 in Eromanga in southwest Queensland, which used to be home to an inland sea and forested vegetation.

Today, this drought-gripped region is largely the domain of farmers and graziers, but in 2004, a chance discovery changed everything. Then 14-year-old Sandy Mackenzie was out mustering cattle by motorbike on his family’s property when he spotted an odd-looking rock. This turned out to be a fossil and ignited the interest of the Queensland Museum.

In subsequent years, scientists and locals uncovered fossils of dinosaurs, megafauna, and ancient plants – all rising to the surface after drought and flood wore down the arid ground over millennia.

Several specimens from this lost world were of the dinosaur now officially known as Australotitan cooperensis, as described in a paper published in the journal PeerJ.

Lead author Scott Hocknull, a palaeontologist at the Queensland Museum, has been working in the region since shortly after Sandy’s discovery. He says that this is the result of seventeen years of work – because classifying a dinosaur isn’t a cinch.

“To make sure Australotitan was a different species, we needed to compare its bones to the bones of other species from Queensland and globally,” he explains. “This was a very long and painstaking task.”

Studying dinosaur bones is difficult – not only are they enormous and fragile, but different specimens can be kept in museum collections thousands of kilometres apart, making comparison quite tricky.

But Hocknull and team created detailed 3D scans of each bone of Australotitan, by taking hundreds of digital photos of each side of the bone, using a crane to flip the massive bone over.

“For a 200 kg limb bone of a dinosaur, we probably take 600 photos of one side of the bone – right up close so we can get all the nooks and crannies and cracks, all the different features that a researcher would want to see,” he explains.

The images were then fed into sophisticated software that stitched them together into a 3D rendering.

“You end up with this really cool three-dimensional picture of the object, so instead of it being flat it’s actually got all of the bumps and grooves across the entire specimen,” Hocknull says.

“The 3D scans we created allowed me to carry around 1000s of kilos dinosaur bones in a 7kg laptop.”

The great thing is that other researchers can also access these virtual reconstructions.

“Scientists working on sauropod dinosaurs in South America or Africa or in Europe…who might never ever be able to get to Australia into the Outback to see the original dinosaur bones…will actually be able to do it as long as they’ve got internet connection,” Hocknull says.

They used these scans to compare the species to its relatives, and found that Australotitan is closely related to three other sauropods that also roamed Australia between 96 and 92 million years ago, during the Cretaceous Period (145 to 66 million years ago).

“We found that Australotitan was the largest in the family, followed by Wintonotitan with big hips and long legs, whilst the two smaller sauropods, Diamantinasaurus and Savannasaurus were shorter in stature and heavily-set,” Hocknull says.

This is the culmination of a collaboration between the Queensland Museum and the Eromanga Natural History Museum (ENHM), which the Mackenzie family set up following the fossil frenzy on their property.

“Finding Cooper has changed the course of our lives and led to the establishment of the Eromanga Natural History Museum,” says Robyn Mackenzie, General Manager of ENHM.

“There’s not many things in your life that you can go back to a point in time and a physical object to say, ‘Well if he’d never picked that up, I wouldn’t be having this conversation’ – it’s quite amazing.”

Mackenzie says that they haven’t even fully excavated the original site where Sandy found the first bone – they’ve been busy delving into so many other more promising sites since.

“Working with Queensland Museum to formally describe Cooper has helped put our little town of Eromanga in Quilpie Shire, southwest Queensland, on the map,” she says. “Australotitan is just the start – we have many more discoveries awaiting full scientific study.”

Palaeontologists weren’t the only ones involved; over the years, fossil preparators, geologists and many volunteers have also been hard at work, from the local community and around Australia.

Natalia Dworniczek volunteered at a dig at Eromanga in 2015 as a palaeontology student, and says it was a childhood dream come true.

“Getting to work with a dinosaur is just ridiculous – being the first human to interact with a specimen was just amazing,” she says.

Dworniczek – who now works as a science communicator at Nitro Nat – explains that the digs were generally undertaken during the winter months when the hot, dry landscape was mild enough to work long days outdoors.

Some of the bones they found were enormous, but they used hand tools “to help position the layout of where the dinosaur was before we got the heavy machinery in”.

Dworniczek also had the chance to spend time preparing the fossils, by removing rock from bone using a tool that was like a “pen-sized jackhammer” and even got to work on the massive humerus of one specimen of Cooper.

While ENHM has a range of dinosaur and megafauna exhibits, it doesn’t yet have a full-sized model of Cooper due to sheer lack of space.

“At the moment we’ve got the hind limb and the front limb section reproduced in a 3D model in the workshop,” Mackenzie says. “I’m trying to get funding for an 1100 square metre…gallery that will able to present a full-size version of how big this animal grew to.”

But Dworniczek says ENHM is still a must-see for those on the dino trail.

“People should get out there, it’s worth the trip,” she says. “It’s like travelling through time – through what Australia used to be like.”

Hocknull says that although this new paper is amazing and a big relief to finally publish, he’s already moving onto the next project – because there are so many more species left to study.

“Discoveries like this are just the tip of the iceberg,” he says. “Our ultimate goal is to find the evidence that tells the changing story of Queensland, hundreds of millions of years in the making.”

Personally, Mackenzie is hopeful they’ll find the meat-eating dinosaur that would have been preying on Cooper, all those millions of years ago: “They have to have had someone who thought they’d be pretty tasty to eat!”