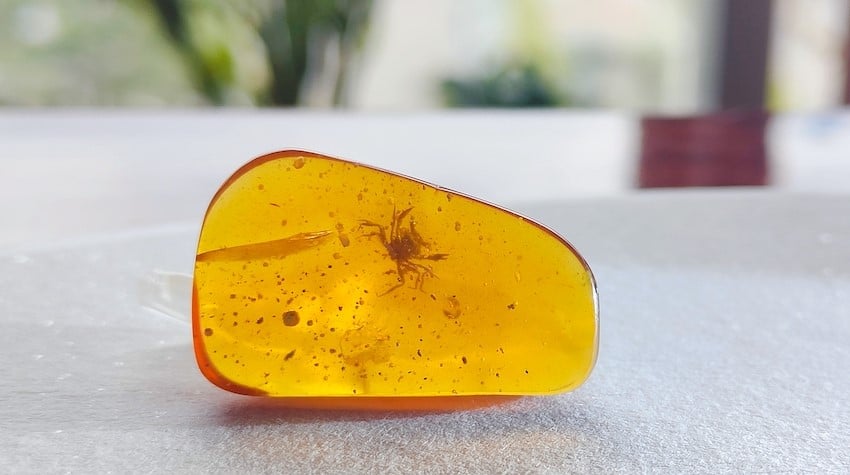 Picture the scene: you’re a crab minding your own business, scuttling along the shoreline on a balmy day when, out of nowhere, a blob of sticky tree sap encases you, freezing you in time for 100 million years. It was a moment of bad luck for this unfortunate crustacean, but a big win for science, with a new study in the journal Science Advances describing in pristine detail the anatomy of one of the earliest preserved crabs from the Cretaceous era.

The international team of researchers, led by Lida Xing of the China University of Geosciences, Beijing, used micro CT scanning to examine and describe the amber-entombed specimen, known as Cretapsara athanata. They say it’s the oldest modern-looking crab yet discovered, as well as the most complete crab fossil ever found.

The scans created a 3D reconstruction of the ill-fated creature, allowing the team to identify its anatomy in exquisite detail, down to the antennae and the fine hairs on its mouthparts. In a surprising turn of events, the team found the creature had gills.

“The more we studied the fossil, the more we realised that this animal was very special in many ways,” says co-author Javier Luque of the Department of Organismic and Evolutionary Biology at Harvard University.

The specimen is rivalled in its completeness only by the mysterious Callichimaera perplexa, a distant relative from the Cretaceous known as the platypus of the crab world for its bizarre anatomy.

Both species of crabs lived during the Cretaceous Crab Revolution, which was not a time when crabs took up arms against their brutal leaders, but an evolutionary bloom in crab diversity that spawned many of the crab species we know and love today.

The missing link to land crabs?

Cretapsara was remarkably modern-looking, unlike most of its Cretaceous counterparts, but the presence of gills shows that it was a transitional creature, living life at the fringes of the sea and the land.

Prior to Cretapsara, the only crabs found in amber were tropical, tree-dwelling species evolved for life on the land, so the researchers wondered how a 100-million-year-old aquatic animal managed to get itself trapped on land.

The authors note that crabs have conquered land, brackish water and freshwater at least 12 times since the age of the dinosaurs, with gills evolving to develop lung-like tissue, making them adaptable to both environs. Cretapsara, however, lacked such gill tissue.

“Now we were dealing with an animal that is likely not marine, but also not fully terrestrial,” says Luque. “In the fossil record, nonmarine crabs evolved 50 million years ago, but this animal is twice that age.”

Previous phylogenetic studies have shown that the evolution of modern crab-type forms occurred in the most recent common ancestor shared by modern crabs, some 100 million years ago. Cretapsara, therefore, bridges the gap in the fossil record, confirming that crabs were able to acclimatise to land and freshwater way back in the time of the dinosaurs, not during the mammal era as previously thought.

The researchers hypothesise that Cretapsara, measuring five millimetres in leg-span, was a juvenile specimen of a freshwater to amphibious species, or that the animal was perhaps a semi-terrestrial juvenile crab migrating onto land from the water (as the iconic Christmas Island red crabs do) before it was unfortunately stymied in its terrestrial journey to adulthood.

Luque suggests that Cretapsara may have been a tree climber, like crabs found in amber from the Miocene.

“These Miocene crabs are truly modern-looking crabs and, as their extant relatives, they live in trees in little ponds of water,” says Luque. “These arboreal crabs can get trapped in tree resin today, but would it explain why Cretapsara is preserved in amber?”

Luque’s research is dedicated to understanding the evolution of crabs, and this new discovery helps push back the origin story of the remarkably diverse and adaptable crustaceans.

“This study is pushing the timing of origin of many of these groups back in time,” he says. “Every fossil we discover challenges our preconceptions about the time and place of origin of several organisms, often making us look further back in time.”