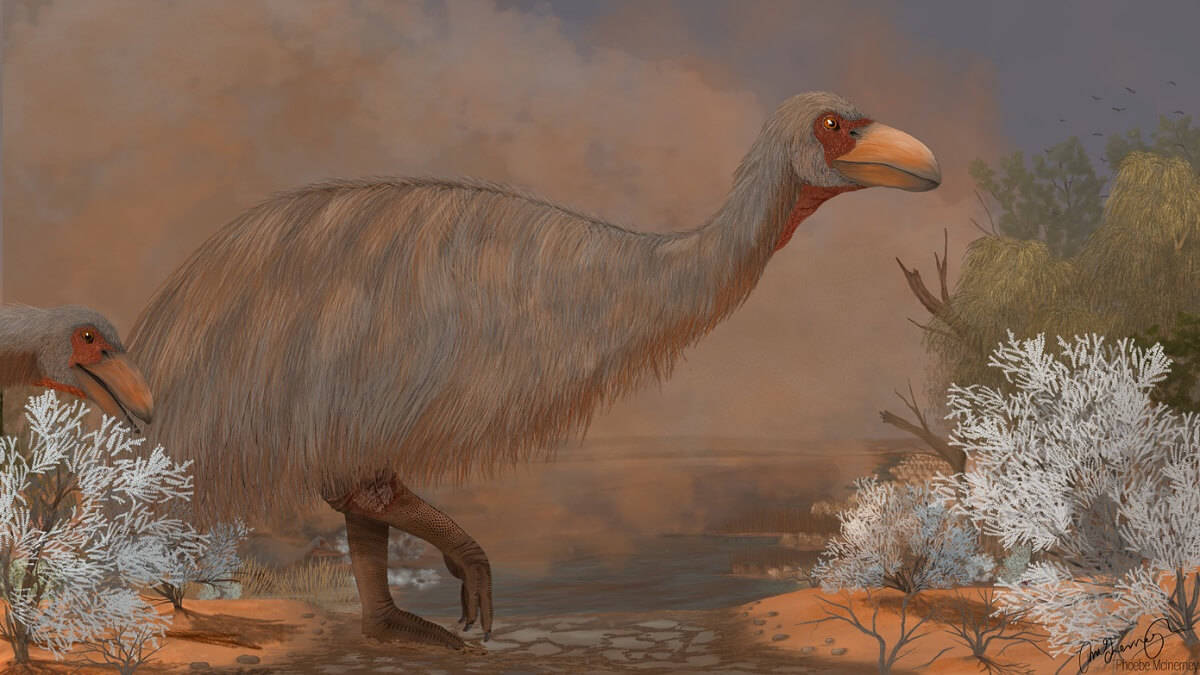 An exceptionally rare fossil discovery by Flinders University researchers in South Australia has offered new insight into the demise of a giant Australian bird, Genyornis newtoni – and the picture isn’t pretty.

Publishing in Papers in Palaeontology, the researchers describe presentations of severe bone infections, known as osteomyelitis, in at least four individuals of this ancient species excavated from the salt lake beds of SA’s Lake Callabonna fossil reserve, about 600km northeast of Adelaide. Weighing in at around 230kg, and standing 2m tall, the imposing Genyornis was the sole surviving lineage of Australia’s dromornithids, dubbed “Thunder Birds”, and this new discovery documents the role of disease in their extinction.

“It’s a rare thing in the fossil record to find one, let alone several, well-preserved fossils with signs of infection,” says Flinders University researcher and lead author on the paper Phoebe McInerney.

“A lot of infections form in soft tissue, which doesn’t preserve very well, so we’re relying on things that show up in the bone.”

The study of disease and trauma in the fossil record, termed palaeopathology, is making rapid progress as emerging diagnostic techniques such as computed tomography (CT) scanning become more readily available. Because bone abnormalities often emerge as a result of specific life events, researchers are increasingly able to reconstruct the behaviour, physiology and life histories of extinct fauna.

In the case of Genyornis, the fossil record tells a story of extreme environmental stress, and a population pushed to the limits of their physiological tolerance.

Piecing together bone fragments from at least 34 individuals, the researchers estimated that a minimum of 11% of the local population at Lake Callabonna was suffering from bone disease.

“In most cases, we probably would only see maybe 1% or 2% of a population presenting with osteomyelitis,” says McInerney. “It was unusual that we had so many individuals showing the same signs of infection, which suggested that there was something going on in the environment that was causing this population to be more affected.”

Co-author Associate Professor Lee Arnold, from the University of Adelaide, dated the lake sediments in which Genyornis was found. His results indicate that the species inhabited the Lake Callabonna region during a period of severe drought beginning about 48,000 years ago, a time in which central Australia transitioned from a landscape of expansive forests and inland lakes to the desert plains and saltbush we see today.

“From studies on living birds, we know that challenging environmental conditions can have negative physiological effects, so we infer that the Lake Callabonna population of Genyornis would have been struggling through such conditions,” he says.

“Birds have a really good stress response,” says McInerney, “but if that stress response is continued for a long period of time, they start to reallocate energy away from things such as their immune system towards things like breathing and brain functions to stay alive. And that’s where you have this increased susceptibility to infection.”

Those succumbing to the effects of osteomyelitis would have faced a painful decline, says McInerney.

“We see frothy and woven bone, large abnormal growths, and cavities in their fossil remains,” she explains.

“They would have been increasingly weakened, suffering from pain, making it difficult to find water and food.”

With the fossil record indicating that this period was likely the last hurrah for Genyornis, it is likely that the high observed disease rates contributed directly to their extinction.

As well as giving us a window into past extinctions, McInerney notes that there are lessons to be learned about the stress modern bird species face as our climate continues to warm and dry.

“We should be able to learn from the fact that these animals are extinct now, potentially because of their suffering with this increased infection rate. We need to apply that to living birds and make sure that they don’t go the same way.”