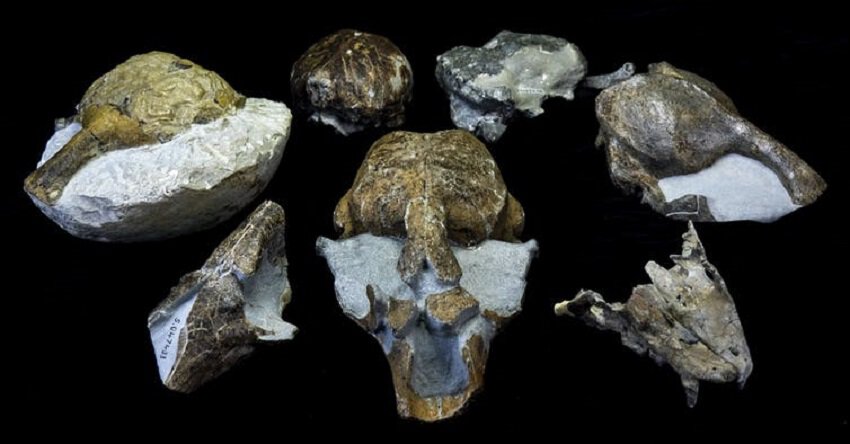 A fossil discovery in New Zealand has revealed a new species of monk seal that once called Australasia home. We introduce the three million-year-old seal, Eomonachus belegaerensis, in a paper published today in the Proceedings of the Royal Society B.

Eomonachus is the first monk seal species, living or extinct, ever found in the southern hemisphere — and the oldest found anywhere.

It’s rewriting everything experts thought they knew about the evolution of “monachines”, a group of seal relatives comprising the two living species of monk seal, the elephant seals, as well as certain species of Antarctic seals.

On the brink of vanishing

Monk seals are some of the world’s rarest and most endangered marine mammals. There are fewer than 2,100 Mediterranean and Hawaiian monk seals alive today. The Caribbean monk seal was hunted to extinction by the 1950s.

Conservationists are now scrambling to save what’s left of Earth’s last exclusively tropical seals from disappearing.

That said, we would be wrong to assume monk seals were doing just fine before humans began exploiting them. How they fared over the past few million years remains unclear. We also don’t know where they originated, as fossils are few and far between.

Scientists traditionally thought all monk seals evolved in the North Atlantic Ocean. Before the discovery of Eomonachus, monk seals had only been found in the Northern Hemisphere.

In fact, most monachine fossils are found in the north, even though several living monachines (Antarctic seals and elephant seals) live almost exclusively in the Southern Ocean.

The unexpected discovery of Eomonachus has completely flipped the evolutionary history not only of monk seals, but of all monachines — by placing all three in the Southern Hemisphere for the first time.

A monk seal from New Zealand

The recovery of the first known Eomonachus fossils came in the form of seven skulls uncovered along the coast of Taranaki, on New Zealand’s North Island. The fossils were retrieved by local collectors and donated to the Te Papa Tongarewa and Canterbury museums.

Our team eventually named the species Eomonachus belegaerensis. This translates to “dawn monk seal from Belegaer”. Belegaer is the fictional sea that lies west of “Middle Earth”, the land from J. R. R. Tolkein’s Lord of The Rings trilogy which is often associated with New Zealand.

But what were monk seals doing in New Zealand three million years ago?

Well, in the past, southern oceans were a lot warmer than they are today. And ancient monk seals, much like their modern relatives, lived in subtropical waters.

But until this year, few scientific studies on extinct monachines had been conducted in the southern hemisphere. This is likely why Eomonachus eluded scientists for so long.

Following the unveiling of Eomonachus, we decided to re-investigate the evolution of the monachines.

Our research indicates this group of seals evolved in the Southern Hemisphere after all. This is in contrast with every theory previously put forward by scientists.

If there is indeed a southern origin for monachines, this would mean the group crossed the equator at least eight times throughout its evolutionary history.

However, the warm waters at the equator are widely accepted to be a thermal barrier which is difficult for marine mammals to cross.

If past monachines did jump between both hemispheres, they would have had broad environmental tolerances that let them do this. And this would have enabled their dispersal around the world.

It’s difficult to say conclusively whether modern seals share this trait, but we do know it’s rare for them to cross the equator during their lifetime.

So why aren’t monk seals living around New Zealand now?

About 2.5 million years ago, marine megafauna experienced an extinction event, thought to have been caused by a drop in sea levels as a result of falling global temperature.

Previous research has theorised this change in climate spurred the extinction of many ancient seals in the Southern Hemisphere. This would have included Eomonachus, as well as other extinct monachines.

This suggests the world’s last two species of monk seal, vestiges of what was once likely a widespread group, are also at risk from climate change.

If sea levels continue to rise, the beaches monk seals rely on for resting and breeding may disappear. Rising temperatures could also disrupt food webs, making it difficult for them to find food.

While the discovery of Eomonachus is exciting, it can also be considered a cautionary tale.