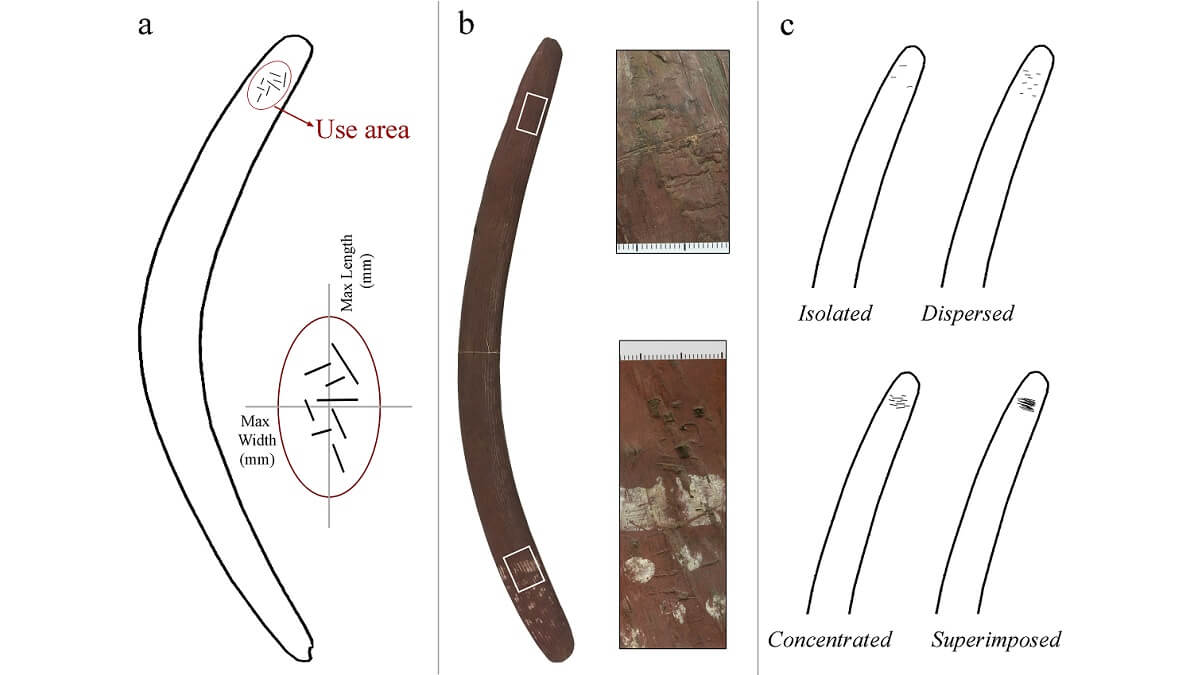 Archaeologists have analysed microscopic traces on the surfaces of boomerangs to reveal they were used for a wide range of purposes – including shaping stone tools.

“Not all boomerangs come back,” says Eva Martellotta, PhD candidate from Griffith University in Queensland.

Martellotta led a traceological study of 100 hardwood boomerangs in a collection held at the Australian Museum in Sydney, representing each state and territory. The microscopic surface marks hinted at what tasks they were used for by Aboriginal Australians.

“Most are used for hunting and fighting purposes, whereas the returning ones are often children’s toys or used for games and learning purposes,” Martellotta explains.

But perhaps most interestingly, the team found specific markings related to the shaping of stone tools on a quarter of the boomerangs examined.

“These marks are not new in archaeology – they are also identified on bone fragments in archaeological sites in Europe,” Martellotta explains, referring to the distinctive impact patterns found on the surface of the bone. “The Neanderthals used them to modify the shape of stone tools, starting 500,000 years ago.”

The Australian archaeological record is rich with stone tools, but material evidence for how they were created is lacking. Ethnographic studies have long suggested that various types of wooden items – most commonly boomerangs – were used to shape and sharpen tools, using a section 5–7cm from the tip to flake off small pieces of stone.

But until now, there has been little material evidence to confirm this. In their paper, the authors note that organic items like wooden tools “are generally much less likely to survive owing to the hostile environmental conditions, including heavy rains and high humidity rate in the soil”.

This new study now shows clear evidence that hardwood boomerangs were used to shape tools, confirming the ethnographic studies. By comparing the boomerangs to Paleolithic technology in Europe, the researchers were able to distinguish the shaping-induced marks from other wear traces caused by manufacturing, hunting or fighting.

“Although the 100-piece sample of boomerangs comes from across Australia, most of the boomerangs used as re-touchers were restricted to the Northern Territory,” the authors note in their paper. Studying a bigger sample will clarify if boomerangs were used for this purpose across the continent or largely in the north.

Martellotta says the finding “emphasises the multipurpose nature of daily tools like boomerangs in Aboriginal culture.”

The study is published in the Journal of Archaeological Science – Reports.