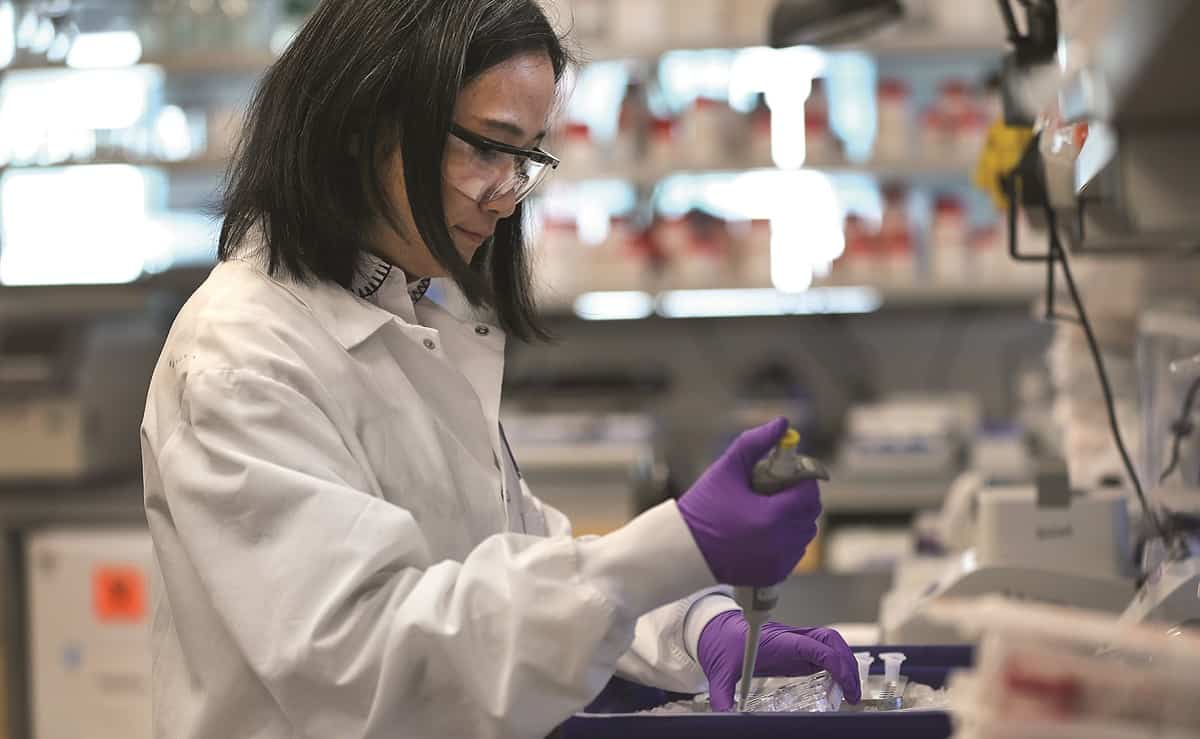 One of the vaccine frontrunners is Moderna. Its trial involves 30,000 participants. Credit: Boston Globe / Getty Images
More on:
covid-19 vaccine

The race is on for a vaccine that will bring the COVID-19 pandemic to heel. Dozens of contenders from around the world have leapt from the starting blocks, dashing towards the finish line as the whole world looks on with bated breath. “It’s definitely a strange world to be in,” says Keith Chappell from the University of Queensland in St Lu­cia. “We’re suddenly kind of famous – for scientists.”

The arduous trek from lab to jab has been com­pressed like never before. Taking a vaccine through pre-clinical animal studies, followed by three phas­es of human trials – Phase 1 for safety, Phase 2 to check it works and find the right dose, and Phase 3 testing in tens of thousands of people – usually takes decades. This time, some companies aim to deliver a finished product less than a year after the novel coro­navirus started making people ill in the Chinese city of Wuhan last December.

Governments, too, are eager. Many are bankroll­ing programs to accelerate development. Several, including the US, the UK and the EU, have inked deals with pharmaceutical companies for hundreds of mil­lions of doses of yet-to-be-approved vaccines.

“It’s been relentless,” says Chappell, who is co-leading the development of a vaccine to protect people from SARS-CoV-2, the virus responsible for COVID-19. The Phase 1 trial is under way, and – all going well – the team will progress to Phase 2 at the end of the year.

There are many contenders. According to the World Health Organization’s end of July count, 139 had reached the pre-clinical phase and 25 more had moved into human trials. Two – one produced by Chinese company CanSino Biologics, the other developed in Russia – have been approved, though the Chinese vaccine is restricted to military per­sonnel, and the Russians have been criticised for eschewing Phase 3 tests. Nonetheless, “it’s a really great position to be in,” says Chappell. “We can select the best vaccine.” That means one that’s safe, that’s effective and that can be scaled up quickly to meet global demand.

Something old, something new

The COVID-19 vaccine field is unique as much for its diversity as for its size. Most of the vaccines target the SPIKE protein – the key that gives SARS-CoV-2 entry into our cells. But tried and true vaccine tech­nologies have been joined by newer – as yet untested – vaccine approaches.

“A lot of the vaccines we use are archaic,” says Col­in Pouton, a pharmaceutical scientist from Monash University. He’s leading a team that is testing a hand­ful of mRNA vaccines in mice.

Nevertheless, they have leapt ahead. The US com­pany Moderna has attracted nearly US$1 billion from the US government and started enrolling 30,000 peo­ple in a Phase 3 trial of its mRNA vaccine.

That kind of support is a boon for the fledgling field, says Pouton. “If you said to some major compa­ny, ‘how about making an mRNA [vaccine]?’ they’d just laugh,” he says. “They’d say, ‘you’re never going to make a commercially viable product, when we’ve already got something that works’.”

COVID-19 could change that. “mRNA is not a technology that’s just a one-hit wonder,” Pouton says. Vaccines made using mRNA can be made and modi­fied quickly, and if multiple strains of a virus emerge, “you could mix and match different mRNAs to hit various strains or various mutations”.

Another newcomer notching up early successes is an adenovirus-based vaccine. These use a virus that’s harmless to humans to deliver coronavirus genes into our cells. When our cells manufacture proteins from the genetic instructions, they illicit an immune re­sponse. “Generally speaking, if you can trigger a cell to replicate parts of the virus, you stimulate a much broader range of the immune system than if you just gave a dead protein to an animal and expected it to mount an immune response,” says Trevor Drew, im­munologist and director of the CSIRO’s Australian Centre for Disease Preparedness in Geelong.

Several adenovirus vaccines are in the race. Out in front is one that was developed by a group at the University of Oxford (and discussed in “The Virus Detectives”, in the previous issue of Cosmos). Drew’s team conducted crucial pre-clinical trials of that vaccine in ferrets, demonstrating that it was able to infect the animals and provoke an immune reaction. (Ferrets bear a near-identical cellular “lock” – a pro­tein called ACE2 – that binds to the SARS-CoV-2 “key” – the SPIKE protein – and are therefore a use­ful animal model.)

The Oxford team is working with the pharmaceutical giant AstraZeneca on Phase 2 and Phase 3 trials and claims that emergency vaccines – for healthcare workers or people in COVID hotspots – could roll off production lines in October.

At the other end of the scale is a vaccine that’s been around for nearly a century: Bacillus Cal­mette-Guerin (BCG), which contains a live but non-disease-causing strain of bovine tuberculosis. It is still given to newborns to lower their risk of catching tuberculosis in parts of the world where the disease is common. But the vaccine has been shown to have some unexpected perks.

“BCG is associated with reduced mortality, par­ticularly from other viral respiratory infections,” says microbiologist Jamie Triccas, from the University of Sydney. His team is combining the coronavirus SPIKE protein with BCG to boost the immune re­sponse. Another group, at the Murdoch Children’s Research Institute in Melbourne, is conducting a Phase 3 trial of the original BCG vaccine, to see if it offers any protection against SARS-CoV-2, even without any coronavirus proteins.

In it for the long haul

Vaccine makers leading the pack are attracting the lion’s share of attention. But others are pacing them­selves for a marathon, not a sprint. They hope to produce second- or third-generation vaccines that may ultimately prove better than the current front-runners.

“First is not always best,” says vaccine researcher Nikolai Petrovsky, from Flinders University in Ade­laide. His company, Vaxine, is completing a Phase 1 trial on a COVID-19 vaccine that combines the SPIKE protein with a plant-sugar-based adjuvant that amps up the immune response. A combined Phase 2/3 trial is planned to start before the end of the year.

Some of the leading candidates are already report­ing such side-effects as fever and headache, especially at higher doses. Sixty percent of participants in the Phase 2 trial of the Oxford vaccine, for instance, had adverse reactions, as did 75% of people given the CanSino vaccine. No severe reac­tions have been reported, but a second generation vaccine could prioritise tolerability, which could ultimately improve uptake of the vaccine.

Another problem that might arise in the first-to-the-finish vaccines is that protection could be fleeting. “Immunity doesn’t last for very long through natural infection,” says Drew. For a common cold coronavirus, the sniffles and sore throat only buy you two to three months of protection, which is why they can strike every year. SARS-CoV2 infection could be similar.

Vaccines should provoke longer-lasting immunity because of the way that they trigger immune respons­es, but how long immunity lasts is a big unknown.

One way to optimise the immune response could be to step away from the standard jab in the arm that vaccine makers are currently best geared up to produce. Drew’s team is testing an intranasal formu­lation, which could be better able to illicit protection in the mucosal surfaces of the lungs and respiratory tract – the tissues the SARS-CoV2 virus uses as its gateway into the body.

At Monash University, they have their “eye on the aging population”, says Pouton. COVID-19 has proven especially deadly for elderly people, in part because of how their immune systems respond to the virus. One possibility, he says, is that “with a vaccine, they’ll get a similar sort of not-so-optimal response.” His team’s mRNA vaccine uses only a portion of the SPIKE protein. It’s also tinkering with the formula­tion of the lipid nanoparticle packages that protect the mRNA molecules and deliver them into our cells. The hope is that these measures reduce the chance of adverse side effects in the elderly.

Another reason to keep at least a few vaccines chugging down the pipeline is that rare vaccine re­actions – such as paralysis – might only turn up once very large numbers of people start being vaccinated.

Theoretically, any one of the 160-odd vaccines currently in development could prove itself. In real­ity, few will get that opportunity. “If second runners don’t get adequate resources, they are likely to get lost by the wayside, whereas if given the chance they could have offered the best solution. I think that’s where we’re headed.”

Three leading candidates – from Oxford/As­traZeneca, Moderna and a collaboration between German-based BioNTech and US pharmaceutical gi­ant Pfizer – have already swallowed up vast sums of public money, Petrovksy says. “Between the three of them, they’ve probably sucked up $10 billion of glob­al vaccine development resources, which is going to make it very hard for any second generation or third generation [vaccines].”

The other risk is that, should the COVID-19 pan­demic be brought under control, priorities will shift elsewhere. Petrovsky has seen it happen before. Af­ter the SARS outbreak in 2003, his team developed a vaccine – using the same technology as in its current Covax-19® vaccine – that looked promising in ani­mal studies. By the time it was ready to go to human trials, funding had moved elsewhere.

It’s either wait and buy when you can or do it yourself.

“Money for pandemic vaccine research is always exceptionally transient,” says Petrovsky. “If the whole problem goes away, all of that funding will dry up, guaranteed.”

Whichever vaccine – or vaccines – make it through the gauntlet of clinical trials, manufac­turing facilities and supply chains will need to be prepared to deliver the billions of doses required. The Coalition for Epidemic Preparedness Innova­tions – an international collaboration funded by public and private money to coordinate and expe­dite vaccine development – is already investigating how to manufacture vaccines in multi-dose vials to avert an anticipated glass vial shortage. The Bill and Melinda Gates Foundation, meanwhile, is putting funds not only into vaccine R&D, but also into bol­stering manufacturing capacity.

Some Australian experts are calling for funding for local production. “If you look at it from an Aus­tralian point of view, it’s either wait and buy when you can or do it yourself,” says Pouton. Melbourne-based company CSL makes protein-based vaccines and has signed on to produce the UQ vaccine. But there are no mRNA vaccine facilities. Establishing one – whether to make a locally developed vaccine or one licensed from elsewhere – would be a prudent invest­ment, Pouton says, given the cost of buying on the commercial market.

The first vaccines could be approved as early as next year. But demand will undoubtedly outstrip supply. Vaccinating everyone who wants and needs a vaccine could take months, or possibly years: longer than it takes to produce the first protective shot. As Pouton says, “There’s going to be a big queue of peo­ple wanting a vaccine.”

Originally published by Cosmos as Strategies behind the great vaccine race