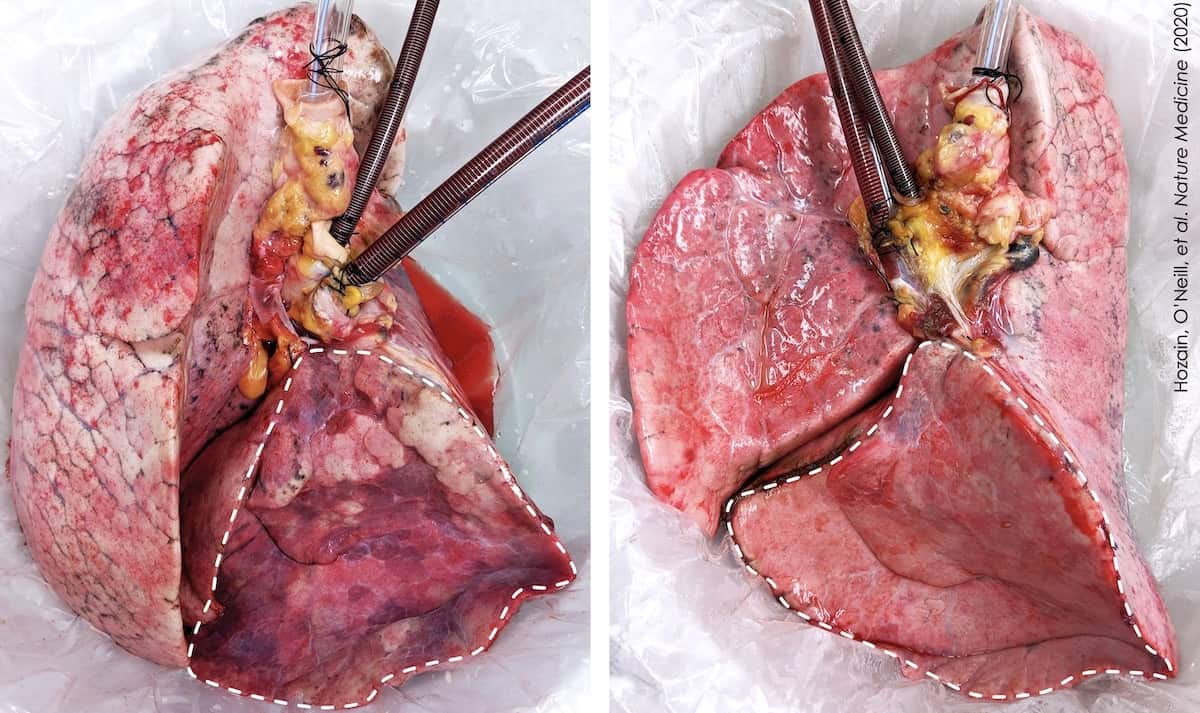 A human lung that failed on EVLP (left) and then recovered on cross-circulation (right). Credit: Ahmed Hozain and John O'Neill/Columbia Engineering
More on:
organ transplant

Damaged human lungs could be made suitable for use in transplants through cross-circulation to a pig, new research suggests.

In a paper in the journal Nature Medicine, a team from Vanderbilt and Columbia universities in the US describes trials which showed substantial improvements of cell viability, tissue quality, inflammatory responses and respiratory function using the technique.

Transplantation is the only definitive cure for end-stage lung disease, but its use is limited by an insufficient supply of high-quality donor lungs.

Only about 20% are considered to be in suitable condition, says Vanderbilt’s Matthew Bacchetta, making lungs the least-used solid organ for transplant

The current standard of care for donor lungs is ex vivo lung perfusion (EVLP), a mechanical support system that can preserve lungs for up to eight hours but has limited means to rehabilitate them.

In previous work, Bacchetta, Columbia’s Gordana Vunjak-Novakovic and colleagues found that damaged pig lungs could be reconditioned when connected to the circulation system of another pig.

In the new study, the team, which includes investigators with expertise in bioengineering, surgery, immunology, stem cells, and various clinical disciplines, explored whether the same process could be used to recondition human lungs.

They tested five damaged lungs previously rejected for transplantation. The pigs were treated with immunosuppressive drugs to prevent physical rejection.

After 24 hours of connection, the histology and function of the damaged human lungs had improved, including one that had been declined for transplantation after EVLP.

“Unquestionably, EVLP has been a game changer for lung transplantation, but it remains limited in its capacity to resuscitate severely injured lungs,” Bacchetta says.

“We knew this was our benchmark study, a human lung that failed state of art treatment with EVLP. If we could make this work on our system, then we were on the right path. It was a eureka moment for our team.”

The authors note that future studies will be needed to assess the clinical potential of this approach, including accounting for the possibility that residual pig cells and factors in the lungs could cause immune responses in or disease transmission to the transplant recipient.