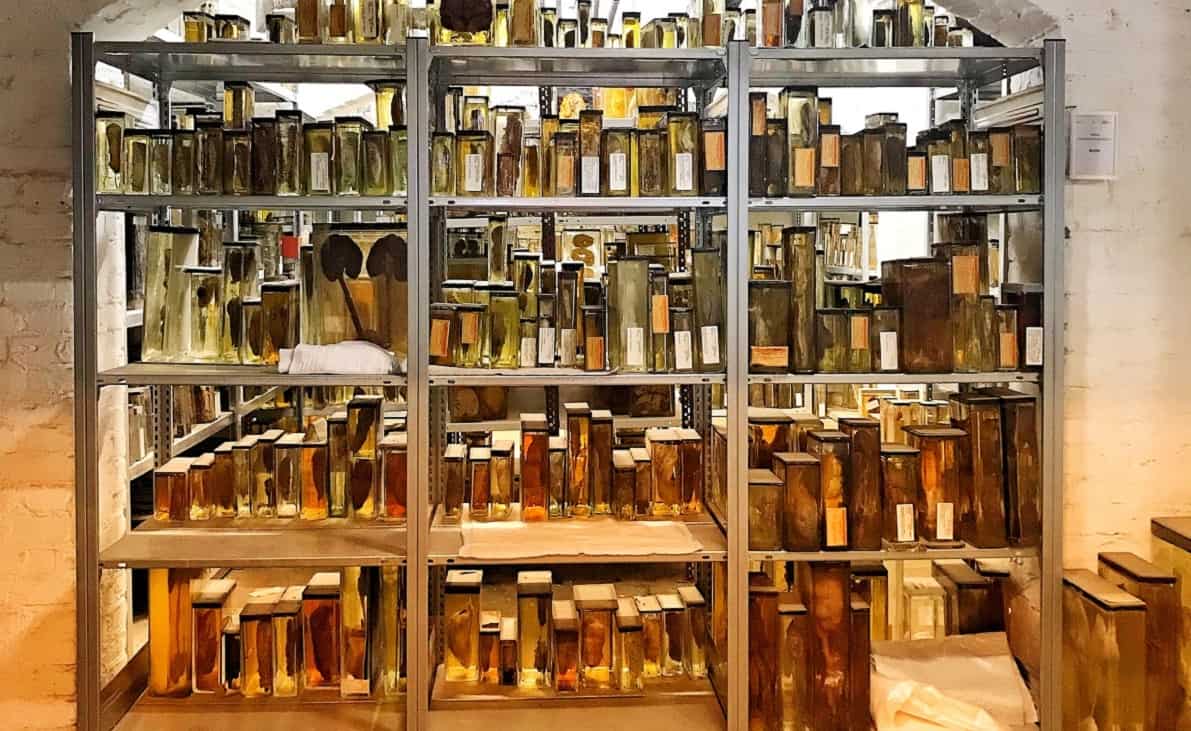 Specimens in the basement of the Berlin Museum of Medical History at the Charité. Credit: Navena Widulin
More on:
virus

Measles may have emerged as early as the sixth century BCE, according to a new study of some old samples.

That is 1400 years or more earlier than current estimates, the researchers write in a paper in the journal Science, and would mean the virus likely developed alongside the rise of large urban centres throughout Eurasia and South and East Asia.

Measles is caused by Measles morbillivirus (MeV), a single-stranded RNA (similar to DNA) virus. There is a general consensus that it first appeared when the now-eradicated rinderpest virus spilled over from cattle into humans, but the timing has been unclear. Common estimates are around the end of the ninth century CE.

To try get a better fix on this, an international team led by Ariane Düx from Germany’s Robert Koch Institute reconstructed the virus genome using lung samples collected from a 1912 measles case. It was one of a number of lung specimens gathered between the 1870s and 1930s and preserved by the Berlin Museum of Medical History at the Charité.

Düx and colleagues from Germany, Belgium, France and the US then compared sequencing data to a 1960 measles genome, 127 modern measles genomes, and genomes from rinderpest and another cattle virus named PPRV.

Using a series of evolutionary and molecular clock models, they traced the emergence of measles in humans between the years 1174 BCE and 165 CE, with a mean estimate of 528 BCE.

They speculate that their results support a scenario where a bovine virus ancestor circulated among cattle for thousands of years, before jumping to humans once settlements began to surge in size in the late first millennium BCE.

“As a fast-evolving RNA virus, it may have produced variants that were able to cross the species barrier on several occasions, but small human populations could only serve as deadend hosts,” they write in their paper.

“Then, almost as soon as contiguous settlements reached sufficient sizes to maintain the virus’ continuous transmission, it emerged as a human pathogen, the progenitor of modern-day MeV.”

The findings are of more than historical interest, in no small part because measles remains a public health issue. As Düx and colleagues note in their paper, it was responsible for an estimated 111,000 deaths in 2017.

Beyond this, as Australian researchers Simon Ho and Sebastian Duchêne (from the University of Sydney and the University of Melbourne respectively) write in a Perspective article in the journal, sampling extinct lineages is particularly important for pathogens that have undergone recent reductions in genetic diversity.

“These include viruses that have been subject to large-scale vaccination programs, such as measles… as well as those that have been targeted by extensive treatment and prevention strategies, such as human immunodeficiency virus type 1 (HIV1),” they write.

More broadly and topically, the role of phylogenetic dating analyses of pathogens has come under the spotlight during the search for the cause and likely ancestors of coronavirus.

“Further genomic data from historical and ancient samples, along with more comprehensive and intensive surveys of viruses harboured in wildlife, will lead to continued refinements of the time scales of emergence and evolution of human pathogens,” Ho and Duchêne say.

“In turn, these refinements will improve our understanding of the circumstances under which pathogens emerge in their hosts and the mechanisms by which they do so.”