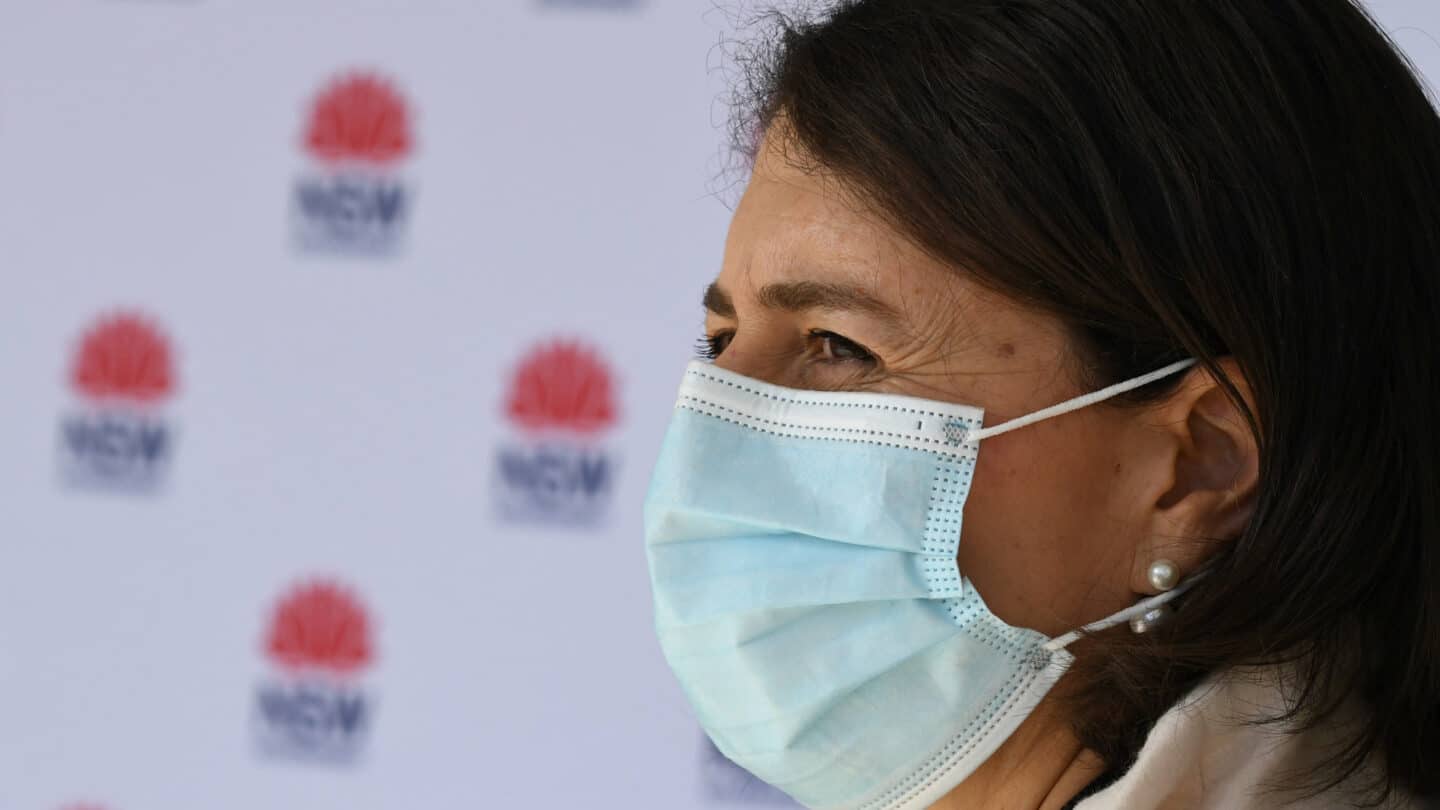 Locked down: The Delta variant has Greater Sydney crippled and weeks still to go of the most severe measures. NSW Premier Gladys Berejiklian has the science at her fingertips. Will she use it?

How do we best use our supplies of COVID-19 vaccines during an outbreak such as the current one in Greater Sydney?

In late April, a research paper published in the journal Vaccine took the population of New South Wales as a case study for a hypothetical COVID outbreak scenario. The modelled scenario started with 100 cases per day. Sound familiar?

The study’s co-authors aimed to provide a vaccination strategy to suppress the outbreak. One of their assumptions, stated in the first sentences of the study’s abstract, was that the initial supply of COVID vaccines would be limited, “and will require a judicious vaccination strategy until supply is unrestricted”.

Coming as it did just a couple of months before the Delta-variant outbreak that’s locked Sydney down, the study provides a fascinating opportunity to look at the current position in light of the modelled results, and to consider the best strategy for the way ahead.

Is our targeted vaccination program working?

According to one of the three co-authors of the Vaccine study, mathematician and infectious disease control researcher Valentina Costantino, our vaccination strategy might have been aimed at the wrong target to deal with the Greater Sydney outbreak. Most countries have given health workers, the elderly and the most vulnerable top priority in the vaccination rollout. This (triaging) approach is designed to reduce hospitalisations and deaths and support health system resilience because older and vulnerable people represent 98% of all COVID deaths and healthcare workers are at a high risk of being infected.

Costantino argues that younger people must be targeted with the Pfizer vaccine because they are more active in the community and have a higher likelihood to transmit the virus to more people.

But this strategy doesn’t impact transmission control, says Costantino, who’s based at the Kirby Institute, at UNSW Sydney.

In Australia, the elderly and people with comorbidities have been eligible to receive a vaccine since mid-February, yet only 37% of people 70 years of age and over are fully vaccinated.

Less than 10% of people aged 20–39 are fully vaccinated. In this age group, only healthcare workers, border workers or those with underlying diseases have been eligible for vaccination. But this age group carries the most significant proportion of the caseload, representing 40% of all the cases but only 27.8% of the population.

Shifting the vaccination target towards the younger portion of the population could reduce transmission and, consequently, the number of cases in Greater Sydney. That would indirectly reduce hospitalisations and deaths while helping quench the outbreak. This effect has been observed in empirical data on influenza vaccination from Japan, where vaccination of schoolchildren was found to reduce deaths in the elderly.

Costantino argues that younger people must be targeted with the Pfizer vaccine because they are more active in the community and have a higher likelihood to transmit the virus to more people. “Pfizer is faster and more effective,” she says.

The main issue with the AstraZeneca vaccine, Costantino says, is the three-month lag between doses that leaves people vulnerable to the virus and more likely to transmit it for longer.

Russell disagrees. “There is no doubt that both [Pfizer and AstraZeneca] are equally and highly effective against bad outcomes as well as transmission,” she says. “We have no shortage of AstraZeneca vaccine. So anyone over 18 should be getting vaccinated with either of those vaccines depending on what they’re eligible for.”

According to an analysis from Public Health England, four weeks after one dose of the Pfizer jab, vaccinated people have about 36% protection against symptomatic disease with the Delta variant, while the AstraZeneca vaccine offers about 30% protection.

But one dose of the Pfizer vaccine had 94% effectiveness against severe Delta COVID, and the AstraZeneca jab had 71%.

“People need to get the shot right now, and we would have very high protection against those severe outcomes,” says Russell. “If they wait [for the Pfizer vaccine to be available], they have no protection for six, eight weeks – who knows how long, to be honest. Why wait when you have an epidemic?”

Another approach NSW authorities could employ is post-exposure prophylaxis (or ring-vaccination), which means that people could be vaccinated if they’re identified as a close contact of someone who has tested positive for COVID-19, theoretically preventing them from contracting the disease.

The Delta strain has proved so highly infectious that household members and other close contacts of positive cases have often developed the infection by the time contact tracers have identified them. Ring-vaccination is most effective when contact tracing capacity is very high.

Post-exposure prophylaxis has been an effective measure with other infections, such as smallpox, hepatitis A, and measles. But Costantino says the efficacy of COVID-19 vaccines might be reduced by 40–50% in a person who has already been exposed to the virus. “We still don’t know exactly how good available vaccines are in preventing symptoms at the onset [of the disease],” she says.

Costantino says ring-vaccination might not be a practical approach, and in fact, could result in a waste of doses that might otherwise be providing much higher protection to others.

Also, the Delta strain has proved so highly infectious that household members and other close contacts of positive cases have often developed the infection by the time contact tracers have identified them. Ring-vaccination is most effective when contact tracing capacity is very high, says Costantino: “If you can trace 90% of contacts at least, that is almost all contacts the person has in their infectious period, then ring-vaccination is the most effective response with a limited stockpile.”

What if we changed the interval between doses?

Some countries, including the UK, have shortened the interval between AstraZeneca doses to accelerate their vaccination program and cope with the surge of cases caused by the Delta variant.

The Australian Technical Advisory Group on Immunisation (ATAGI) has recently recommended that the standard 12-week interval between the first and second doses of AstraZeneca be reduced to four to eight weeks for people in Greater Sydney, to help control the worsening outbreak.

The AstraZeneca clinical trials showed that the vaccine generates the most potent immune response when the two doses are given 12 weeks apart. A study published earlier this year in The Lancet found that giving the second jab less than six weeks after the first resulted in a 55% drop in efficacy.

Russell says the 12-week gap is ideal but points out that it’s crucial to vaccinate as many people as possible as quickly as possible during an epidemic.

In line with that thinking, some countries, including Canada, have pushed the second Pfizer dose to longer than the standard three weeks to give more people some protection with their first dose until more supply is made available. “I think that’s a very wise decision,” says Russell.

She says the evidence is mounting that delaying the second Pfizer dose up to 12 weeks could increase immune response. A study led by the University of Birmingham in collaboration with Public Health England found that antibody response in people aged over 80 was 3.5 times greater in those who had the second dose of the Pfizer vaccine after 12 weeks than those who had it after three weeks.

Another study led by the University of Oxford, in collaboration with the University of Birmingham, found that the immune system’s T cell levels are also well-maintained following a longer interval between the first and second dose of the Pfizer vaccine.

So what’s the most effective strategy?

Costantino and her fellow researchers found that when vaccine supply is not limited, mass vaccination, which is the current approach in Australia – triaging only according to age and vulnerability – is the best pandemic exit strategy. “If the stockpile wasn’t limited, and you had a high capacity of distribution, mass vaccination is the most effective approach,” she says.

It’s important to make the point that Australia doesn’t really have a limited supply of COVID-19 vaccines: it has a limited supply of the vaccine people want. Confusing messaging around the severe but rare thrombosis with thrombocytopenia syndrome (or TTS) linked to the AstraZeneca vaccine, and continued changes in recommendations for its use, have put people off – but it’s the only COVID vaccine being made, and in quantity, in Australia.

When vaccine supply is limited (actually or artificially), the researchers found that targeted strategies should be considered, but sustained epidemic control cannot be achieved with that alone. Non-pharmaceutical interventions, such as face mask use, physical distancing, and limits on people’s movement, need to continue to mitigate the outbreak.

“The primary objective of any vaccination program is always to avoid death and hospitalisation,” says Russell, who wasn’t a study author. “That means direct protection by vaccinating people who have the most risks – the elderly and those with comorbidities.”

But in an outbreak, she says that it’s essential to channel vaccines to geographical areas and demographic groups that fuel virus transmission and follow a prioritisation strategy.

Last Monday, NSW chief health officer Kerry Chant said “vaccination is part of the answer”. She said the health department has been looking at which groups are driving the transmission in Sydney. “What’s been interesting is the young profile,” she said. The only people moving about are essential workers – people working in logistics and distribution. She said health authorities are considering how vaccinating that group could potentially prevent transmission: “We are leaving no stone unturned in terms of how to recalibrate our vaccine strategy and understand how to use the available vaccines best.”

On Tuesday, NSW Premier Gladys Berijiklian demonstrated a willingness to recalibrate the NSW vaccination program by announcing that, starting from the next day, anyone aged 18 and over in Greater Sydney could walk into a pharmacy or book an appointment at a vaccine hub to receive the AstraZeneca shot. On Wednesday, she said Year 12 children in the Sydney local government areas where most community transmission is occurring – in Sydney’s south and south-west – would be offered a Pfizer shot, with vaccine supplies redirected from regional NSW to accommodate the decision.

“We need to keep going with mass vaccination,” says Costantino. “But we have enough doses to target younger people in parallel. That’s a good way to move forward.”

Originally published by Cosmos as Need to get rid of COVID? There’s a model for that…