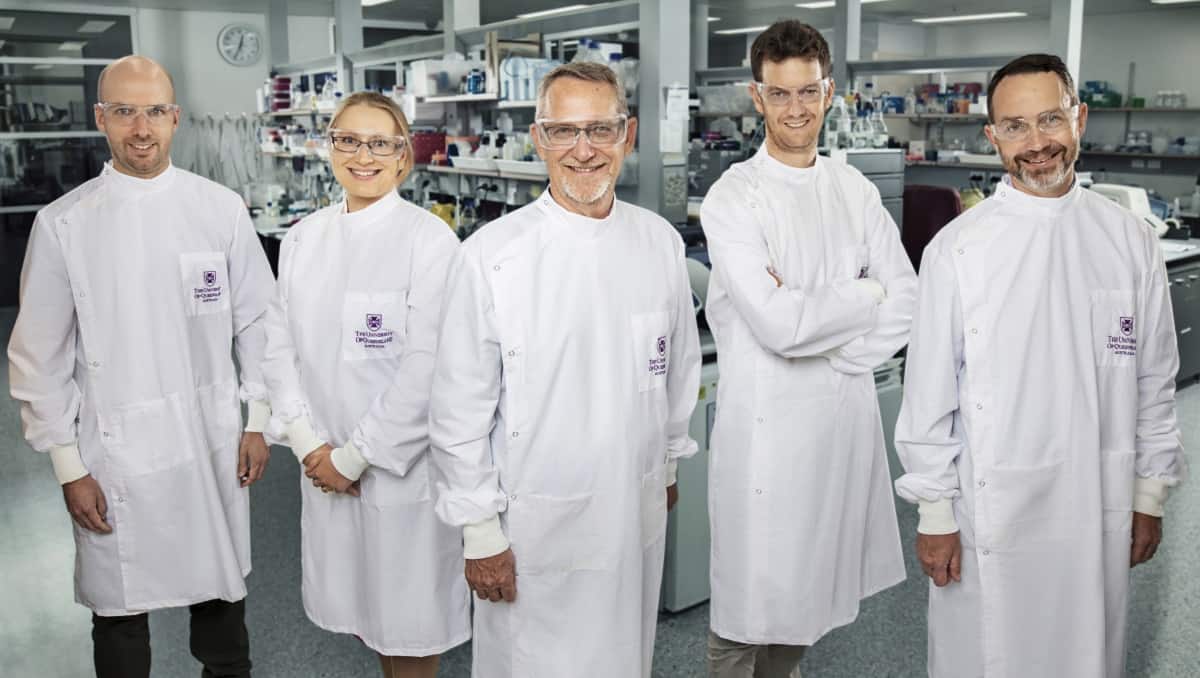 Researchers at the University of Queensland this week began the first human trials of their COVID-19 vaccine. You can read the latest update here.

What were your thoughts as you saw clear signs of the pandemic emerging?

When we first heard the reports coming out of China, the team immediately snapped into action and thought that this might be a good “stress test” case to run through our rapid response vaccine pipeline we had been developing as part of a Coalition for Epidemic Preparedness Innovations (CEPI) funded project platform. Of course, in early January, all we had was the viral RNA sequence that was likely a good fit for our molecular clamp technology based on work we’d done on MERS [Middle East Respiratory Syndrome].

There were definitely some discussions around how it might play out and even some insight that this could be a major pandemic threat.  But it was also really hard to judge based on the patchy data around disease transmission.

Two things stand out as perhaps the key signals the rest of the world missed: 1) China immediately started building new hospitals. 2) President Xi made a public statement that this was a very serious threat for China.  That should have been the wake up call for global preparedness, but clearly that took too long.

How do you start trying to find a vaccine for something we’ve never seen before?

Like most things these days, it starts with the available data.  In this case it was just great to see the Chinese scientific community make the genome sequence available for the virus so quickly.  That let people start to put together a lot of information about what might be needed for a vaccine.

Once we knew this was a coronavirus and the similarities and differences to other known viruses the work could really kick into high gear in terms of getting our vaccine program underway.  For instance, we knew, based on previous work with other coronaviruses, that the spike protein was likely the best target of a protective immune response, so we, like many other groups, went down that path, albeit by incorporating our own technology.

What previous experience could you draw on?

The UQ team has been working working in the field of molecular virology for a long time and specifically, on the molecular clamp for more than 10 years.  We have used the technology to get early stage proof-of-concept data across a range of viruses, including influenza, Ebola, NIPAH, MERS, RSV and others.  This work gave us some hints on how we would need to design our vaccine candidates for SARS-CoV-2.

What – and who – has the work to date involved?

The UQ team was awarded funding from the Coalition for Epidemic Preparedness Innovations (CEPI) in early 2019 under the “Platform technologies” funding scheme.  This really laid the groundwork for taking the molecular clamp into clinical development.  The plan was to conduct Phase 1 studies for influenza and MERS followed by a “Disease X” mock response based on the learnings from the previous programs. The goal was to see how quickly we could go from virus genome to human dose.

We had our first discussions with CEPI in very early January about using the molecular clamp platform as a rapid response to COVID-19 and they made the formal decision to fund the program in late January.  We had started the work in anticipation and it was all hands on deck as we turned the entire groups focus toward SARS-CoV-2.

As part of our CEPI project we had built a broader consortium including key researchers from other organisations including CSRIO, The Doherty Institute at University of Melbourne and the Australian National University.  We also had international links with the University of Hong Kong through our MERS work.

How and when did you suspect you were onto something?

We were confident from day one that we could use our platform to progress something, but we also knew there were a lot of technical hurdles to overcome.  In the early weeks of our program the team had to screen through a large number of clamp-spike protein variants to find the one that had the properties we wanted in a vaccine. To see that initial result in the lab was a great early boost for the team – we showed we could produce the vaccine in the form we needed it.

We locked in on this on 14 February.  From there it was all systems go in terms of producing the vaccine at larger scales and developing a deeper understanding of the molecule.  We were doing this in parallel with a large number of pre-clinical studies that would support program progression.

One of the most important early readouts was when we could show that antibodies from mice that had received two doses of the vaccine exhibited a strong neutralising antibody response. That result provided the initial support to move onto formal toxicology and virus challenge studies. We are now in a Phase I clinical trial and so still early days for our program, but we are optimistic about the future development path.

What if anything surprised you about the behaviour of the virus? Any interesting twists to the discovery process?

Probably the most surprising thing is that if you took a poll amongst scientists working in this space most would probably have said that it would be an influenza virus that would be responsible for the next global pandemic.  When we look back at SARS and MERS, those viruses cause a much higher mortality rate and lower transmissibility.

SARS-CoV-2 appears to have hit the sweet spot between transmissibility and severity, that is coupled with the possibility that there is significant viral shedding prior to onset of symptoms. Also we think everyone needs to recognise that we are still in the very early stages of this pandemic and that while we race to develop treatments and vaccines, public health measures are still our best chance to reduce impact and save lives.  There is no reason this can’t be balanced with maintaining economic activity – we just need strong national and international leadership.

In terms of twists for our discovery process, what we have observed is just the most amazing willingness to collaborate and drive this project forward.  This has really been across the board from both academia and industry.  Without this level of support and collaboration we would not have been able to start our clinical trial this week.  On top of that we have been blown away by the level of financial support that has come from philanthropic sources, from big business to school children – that’s been a huge boost for us all and let us move at speed.

What’re the next steps, and how will you measure progress from here?

We started our human clinical trial this week and there will be lots of activity working on the samples coming from that study.  We are hopeful that in a couple of months we have some interim readouts that will let us know about the safety and immunogenicity of the vaccine.  That will then be the trigger point to keep moving forward.  We’ve been very fortunate to have CSL on board as a development partner.  They are preparing, should the initial results be positive, to move into both large-scale manufacturing and later stage clinical development.  If things go to plan, we’d love to see a large number of doses available next year that have an impact on the pandemic.

This is an international challenge. How has news of your progress been received and what impact might it have?

We had support from so many sources and also words of encouragement from across the globe.  We’ve had letters and emails from so many people wishing us well and hoping for success.  Working so closely with CEPI has also been key as we have been involved in various global initiatives and meetings across many of the other international groups developing COVID-19 vaccines.  We’ve been able to share our progress and also hear updates from the other programs.

The challenge of developing seven billion doses to immunise the world’s at risk population is immense and it will likely need several successful vaccines to be developed in parallel to enable life to return to normal.  We are glad to be playing a role in the fight against this virus.

Originally published by Cosmos as Cosmos Q&A: Quest for a vaccine