Home ■ Earth ■ Earth Sciences ■ Why is the sky blue? 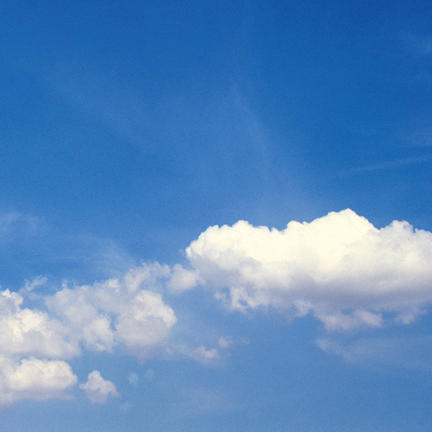 Why is the sky blue? It is a question that, in true Sumner Miller fashion, leads to many more: What is light? What is the sky made of? How do we perceive colour?

To answer those questions we first turn to Isaac Newton who once said, “If I have seen further than others, it is by standing on the shoulders of giants.” Like everyone else in the 17th century, Newton marvelled at seeing a beam of sunlight enter a polished glass prism and emerge as a rainbow of colours. Some thought the prism itself contained the rainbow and the light beam was pushing it out. Newton had another suspicion. He directed the spreading rainbow of rays on to a second prism. What emerged at the far end was a restored beam of white light. Newton showed the prism was not concealing a rainbow; it was splitting light into its component colours.

So Newton takes us the first step of the way by showing that sunlight is made up of the colours of the rainbow.

For the next step, we turn to another Englishman, polymath Thomas Young. Not only did he solve several of the mysteries of physics, he also cracked Egyptian hieroglyphics using the ancient Rosetta Stone that bore the same inscription in three languages. Young’s contribution to our understanding of light was to replace Newton’s 100-year-old idea that light is made up of particles. Instead, based on his studies of sound, he proposed that light was a wave and in 1803 proved it to his colleagues at the Royal Society of London, beginning with the words, “The experiments I am about to relate … may be repeated with great ease, whenever the sun shines, and without any other apparatus than is at hand to everyone.”

One experiment involved punching two small holes in the roof of a church and allowing sunlight to form a pattern on the floor below.

At hand, perhaps, but “great ease” might be a stretch. According to rumour, one experiment involved punching two small holes in the roof of a church and allowing sunlight to form a pattern on the floor below. You might expect he would have seen two bright dots, but no. He saw a pattern of bright and dark bands. There was no explanation for that pattern unless the light travelling through the slits behaved like waves. Imagine throwing two pebbles into a stream. When the spreading ripples meet, sometimes they cancel each other out and sometimes they add together. If light were a wave, these cancellations and additions would produce a pattern of alternating light and dark bands, which was exactly what Young saw in various versions of his now famous “double slit experiment”.

In 1859 Irish scientist John Tyndall used this information to make the next step, becoming the first to explain why the sky is blue. He shone a beam of white light through a fluid speckled with floating particles. When he peered from the side the fluid glowed blue. This became known as the “Tyndall effect”. Tyndall realised this meant the blue light was bouncing or “scattering” off the particles in the fluid more than any other colour. Since blue light has a short wavelength, he inferred that shorter wavelengths are scattered more than longer ones.

As sunlight passes through the atmosphere it scatters, bouncing off the molecules of nitrogen and oxygen.

Tyndall’s experiment takes us the final step of the way, showing that blue light scatters more than other colours.

So what if we put all of this together? As sunlight passes through the atmosphere it scatters, bouncing off the molecules of nitrogen and oxygen. The shorter wavelengths at the blue end of the spectrum are 10 times more likely to scatter than red light, the longest wavelength. To an observer on Earth, it is like a storm of bouncing blue light waves bombarding the eyeballs; in comparison the drizzle of red wavelengths hardly register, so the sky looks blue. Why not violet which, as the shortest wavelength, scatters the most? The answer lies with our eyes. The scattered light in fact does contain violet light as well as blue. But the eye’s receptors for coloured light, the cones, are not as sensitive to violet and when it is combined with blue, they register the latter.

But hang on, why do sunsets appear red? When the sun is low on the horizon, light has to travel much further through the lower atmosphere, encountering bigger particles such as smoke and pollution that make blue light scatter all the more. By the time this light reaches your eyes, most of the blue light waves have scattered away. This leaves predominately red light waves to create that beautiful reddish glow.

So the next time you gaze up at a beautiful blue sky, remember the giants who explained why it is so.

In the 1960s and ’70s, one of the best places for answers to ‘why’ questions was a weekly television show that began: ‘Hello, my name is Julius Sumner Miller and science is my business!’ The very picture of the absent-minded professor, he adored experiments, even those that went wrong, confident that both success and failure were opportunities for learning. It is his spirit of enquiry that Roger Rasool honours here.