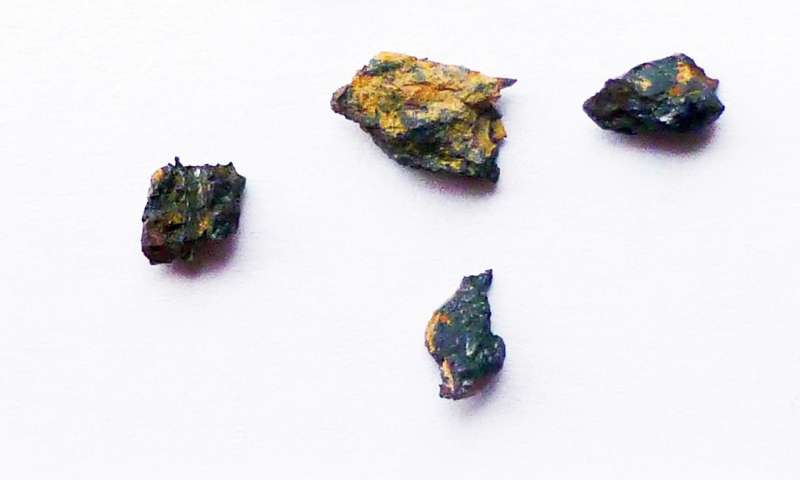 A stone from space found in Egypt in 2013 continues to baffle scientists after a detailed analysis of its components revealed it was unlike any other extraterrestrial rock ever found.

The Hypatia Stone – named after a third century Egyptian female mathematician – was found a few years ago. In 2013, researchers announced that it was not from earth, and by 2015 other teams using noble gas analysis and nuclear probes confirmed that it was not part of a meteorite or comet.

This, of course, left the question of its origin still begging. Now research from a team at South Africa’s University of South Africa has produced a thorough analysis of the pebble’s component parts and the mystery, far from being resolved, has only deepened.

To conduct their analysis, the team, led by Jan Kramers, first separated the stone’s intrinsic components from the terrestrial bits and bobs that had accumulated in and around it.

Looking at the former, the first thing Kramer and his colleagues confirmed was that it was nothing at all like the make-up of most meteorites. Like the Earth itself, meteorites typically contain a small amount of carbon and a large amount of silicon.

Hypatia, in contrast, “has a massive amount of carbon and an unusually small amount of silicon”, says Kramer.

That’s odd, but by no means the oddest thing the researchers found.

“Even more unusual, the matrix contains a high amount of very specific carbon compounds, called polyaromatic hydrocarbons, or PAH, a major component of interstellar dust, which existed even before our solar system was formed,” says Kramer.

“Interstellar dust is also found in comets and meteorites that have not been heated up for a prolonged period in their history.”

This suggests that the stone is immensely old. Just how old, remains to be determined, but other discoveries made by Kramer’s team are generating immense excitement.

Most of the PAH compounds have transformed into tiny diamonds – the result, the researchers suggest, of the force of impact when the much larger rock of which Hypatia is a surviving fragment smacked into the Earth.

Other elements, however, protected inside the rock, have remained unchanged, and are confounding expectations.

Hypatia contains aluminium in a pure micro-nugget form – something never before seen on earth or in space rocks.

“The grains are the first documented to be found in situ without having to first dissolve the surrounding rock with acid. There are also grains of a compound consisting of mainly nickel and phosphorus, with very little iron; a mineral composition never observed before on Earth or in meteorites.”

The scientists suggest that these components – along with some strange nickel-phosphorus-iron grains – mean that significant parts of the Hypatia Stone were formed in pre-solar times – that is, before the sun, let alone the planets, had formed.

Clearly, the mysteries of Hypatia are still to be fully resolved.

The research is published in the journal Geochimica et Cosmochimica Acta.