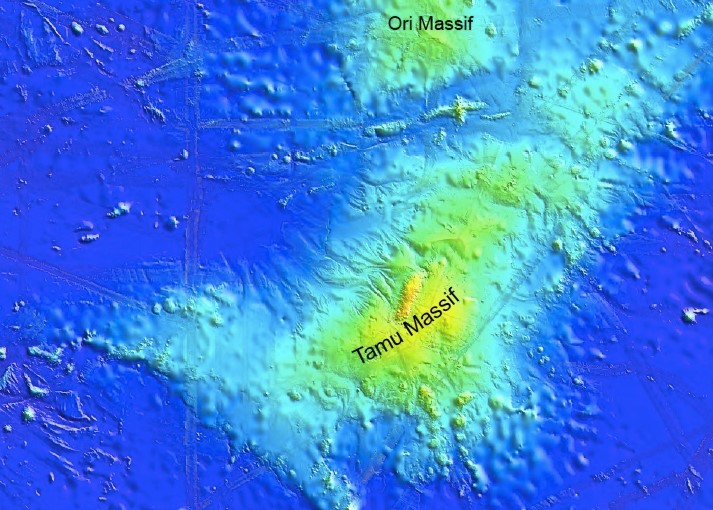 Tamu Massif – no longer the biggest, but still impressive. Credit: University of Houston

Tamu Massif was declared the largest single volcano in the world when it was located in the Pacific Ocean about 1600 kilometres east of Japan in 2013 – but now it seems it probably isn’t.

And the leader of the team that found it is the first to agree.

“The largest volcano in the world is really the mid-ocean ridge system, which stretches about 65,000 kilometres around the world, like stitches on a baseball,” says William Sager, a geophysicist at the University of Houston, US.

“This is really a large volcanic system, not a single volcano.”

In their original paper, Sager and colleagues concluded that Tamu Massif was an enormous shield volcano, formed by far-reaching lava flows emanating from its summit.

However, new findings by Sager and others, published in the journal Nature Geoscience, conclude that it is a different breed of volcanic mountain altogether.

A research team from the US, China and Japan analysed magnetic field data over Tamu Massif, finding that magnetic anomalies – perturbations to the field caused by magnetic rocks in the Earth’s crust – resemble those formed at mid-ocean ridge plate boundaries.

They compiled a magnetic anomaly map using 4.6 million magnetic field readings collected over 54 years along 72,000 kilometres of ship tracks, along with a new grid of magnetic profiles, positioned with modern GPS navigation.

The map shows that linear magnetic anomalies around Tamu Massif blend into linear anomalies over the mountain itself, implying that the underwater volcano formed by extraordinary mid-ocean ridge crustal formation.

The new findings also weaken the accepted analogy between eruptions of continental flood basalts and oceanic plateaus because the formation mechanisms are shown to be different, the researchers say.

Sager is philosophical. “Science is a process and is always changing,” he says. “There were aspects of that explanation that bugged me, so I proposed a new cruise and went back to collect the new magnetic data set that led to this new result.

“In science, we always have to question what we think we know and to check and double check our assumptions. In the end, it is about getting as close to the truth as possible – no matter where that leads.”

And this all means that Mauna Loa, on the island of Hawaii, should once again be considered the world’s largest single volcano.