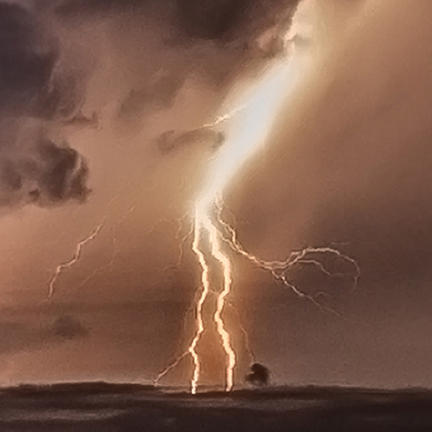 Lake Maracaibo in Venezuela has earned the top spot as Earth’s new lightning capital, taking the title from Africa's Congo Basin. According to a recent study from the Lightning Imaging Sensor onboard NASA's Tropical Rainfall Measurement Mission, Lake Maracaibo receives an average of about 233 flashes per square kilometre each year, far more than the Congo Basin’s 158.

“Lake Maracaibo has a unique geography and climatology that is ideal for the development of thunderstorms," said Dennis Buechler from the University of Alabama in Huntsville.

Located in northwest Venezuela along part of the Andes Mountains, it is the largest lake in South America.

Storms commonly form at night as mountain breezes develop and converge over the warm, moist air over the lake. These unique conditions contribute to the development of persistent deep convection resulting in an average of 297 nocturnal thunderstorms per year, peaking in September.

Lake Maracaibo is not new to lightning researchers. But Africa remains the continent with the most lightning hotspots, according to the study, with six of the world's top 10 sites. The majority are near Lake Victoria and other lakes along the East African Rift Valley, which have similar geography to Lake Maracaibo.

The very earliest parts of human development are no longer an unobservable mystery.

Research from the Rockefeller University in New York City shows, for the first time, what happens on molecular and cellular levels up to two weeks after fertilisation.

Published in Nature this week, the breakthrough system is the first in which the process of implantation has successfully been replicated outside a uterus. This technique may also help scientists understand what drives early pregnancy loss.

Occurring shortly after fertilisation, implantation is a crucial step in human development. The small, hollow ball of cells called a blastocyst attaches to the uterus, allowing an embryo to take shape.

In this image the molecular markers delineate different cell types within an attached human embryo, shown here 12 days after fertilisation. A structure called the epiblast, for example, is shown in green.

Vultures in some parts of the world are in danger of disappearing and according to a new report from biologists at the University of Utah, such a loss would have serious consequences for ecosystems and human populations alike. Other scavengers will flourish and proliferate and could bring bacteria and viruses from carcasses into cities.

Vultures are highly efficient consumers of carrion, sometimes locating and consuming carcasses within an hour, before other forms of decay can set in. And vultures' stomachs are highly acidic, killing nearly all bacteria or viruses that may be present in the dead and decaying flesh of an animal. Combined with the fact that vultures rarely come in contact with humans, they serve as a barrier to prevent diseases from proliferating in dead animals and spreading to humans.

A plume of smoke hangs in the air as forest fires rage in the distance in Fort McMurray, Alberta, Canada this week.

The wildfire remains out of control and has burned approximately 85,000 hectares in a heavily populated area. Approximately 88,000 people have been evacuated.

To mark Mercury’s transit across the face of the Sun on 9 May, this Image of the Week offers an intriguing view of the planet's Kertész crater captured by NASA’s Messenger orbiter.

You might see either a mound bulging out of the planetary surface, looming towards the camera like a dome, or – correctly – a crater that dips into Mercury’s crust. After a short while, the orientation of the image may appear to flip between the two.

This effect, sometimes referred to as the “crater illusion”, emerges because we’re used to interpreting shadows from overhead light. But for many satellite photos of terrain, shadows appear only when the light source is almost horizontal to the surface. This then leads to us misinterpret patterns of light and shade.

Within this crater, rippled slopes – one illuminated, the other in shadow – burrow into the surface of Mercury until they reach a relatively flat patch, which is the deep floor of Kertész. The features scarring this floor are the crater’s central peaks, which stand hundreds of metres above their surroundings.

Kertész is roughly 33 kilometres wide and located in the western part of Mercury’s Caloris basin. At up to 1,500 kilometres across, Caloris is the largest basin on the planet, and one of the largest in the Solar System.