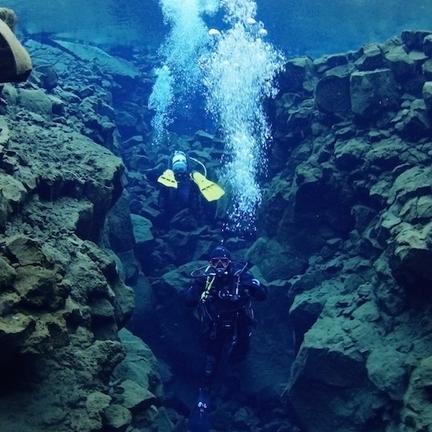 The Silfra fissure, under Þingvallavatn lake in Iceland’s Þingvellir, or Thingvellir, valley was formed as the Eurasian and North American tectonic plates move apart by around two centimetres a year.

This movement, which builds up pressure in the earth above the crack, results in a major earthquake every 10 years or so. They result in further cracks and fissures, but none are as large as Silfra.

Þingvallavatn is the country’s largest lake with an area of 83.7 square kilometres, and Silfra is a popular scuba diving attraction.

The lake is also noted for its crystal clear waters, which are fed by Iceland’s second largest glacier Langjökull, about 50 kilometres to the north. Until a few thousand years ago, meltwater ran through a river directly into the lake. But after an eruption of the Skjaldbreiður blocked the river, water has trickled underground into porous lava rock and takes up to 100 years to travel to the lake. This lengthy filtration accounts for the water’s purity.

The Silfra fissure has three distinct sections: Silfra hall, Silfra cathedral – a 100 metre-long fissure with visibility almost from end to end – and Silfra lagoon. At its deepest, it is 63 metres.