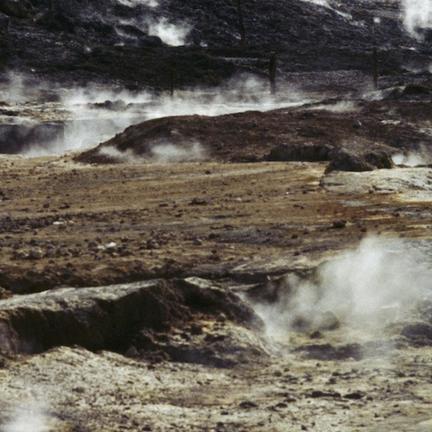 The composition of gases in the magma chamber beneath a volcano changes dramatically in the lead-up to an explosion, a study published in Nature Geoscience shows.

Monitoring these changes may give surrounding towns precious days, or even weeks, to evacuate, meaning the difference between life and death.

Predicting when a volcano erupts – especially when it’s lain dormant for centuries – is notoriously difficult.

Scientists have tried to translate ground movements, caused by the slow burbling of gas-rich magma building pressure in chambers just below the surface, into warnings of an impending blow-out.

But it doesn’t always work.  Some volcanoes continue building pressure for millennia without exploding.

So researchers from Durham and Oxford Universities in the UK and the Vesuvius Volcano Observatory in Italy tried to nail down a better warning sign.

They analysed tiny crystals of a mineral called apatite which were thrown out during an eruption of the Italian volcano Campi Flegrei, also known as the Phlegraean Fields, near Naples, 4,000 years ago.

Like little time capsules, the apatite crystals locked gas molecules inside and kept them pristine over the centuries. By analysing the trapped gases, the researchers found the magma that eventually spewed out spent most of its lifetime relatively bubble-free.

But just before it erupted, it suddenly received a big batch of gassy magma, which pushed it over the edge and out onto the Earth’s surface.

Prior to eruption, some of these gases would’ve escaped through vents. Could monitoring these help predict when other volcanoes will erupt?

“Now that we have demonstrated that this approach can work on a particular volcano, and given apatite is a mineral found in many volcanic systems, it is likely to stimulate interest in other volcanoes to see whether there is a similar pattern.”

In any case, the work might help the residents of Campi Flegrei. While the volcano’s most recent eruption was less than 500 years ago, scientists believe there might be another not too far off.