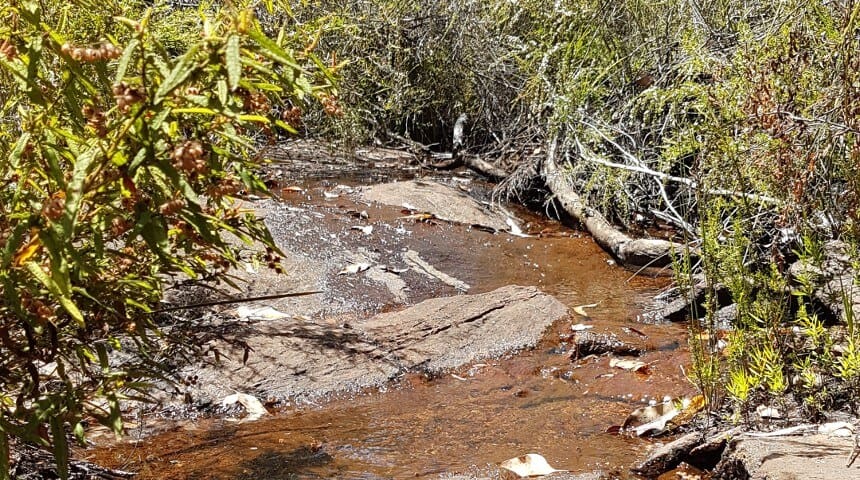 Researchers have warned that stream fauna among Western Australia’s towering jarrah forests are at risk of acute loss, as many of the waterways in south-western WA begin to dry out each year under the effects of climate change.

These once-reliable streams create small, aquatic havens for rare species, but records going back to the 1970s reveal drastically reduced rainfall and a formerly lush region now prone to drying – the WA state government records that stream flows in the jarrah forests have more than halved since 1975.

It’s a story that’s playing out, to greater or lesser degrees, around the world. And as a warming climate interrupts water flows and rainfall, precariously balanced ecosystems can struggle to adapt.

Seeking to understand the inevitable knock-on effects of such a profound – if slow – desiccation, researchers from Murdoch University’s Harry Butler Institute have investigated the impacts on various key species in the jarrah streams.

“Recent climate change is altering the timing, duration and volume of river and stream flows globally, and in south-western Australia permanent flowing rivers and streams are drying and changing to intermittent flows, meaning they are now dry for several months each year,” says lead researcher Nicole Carey.

“This is anticipated to have profound impacts on the survival of our stream fauna, including many of our ancient and unique species, which are now threatened with extinction due to climate change.”

In a new paper published in the journal Global Change Biology, the researchers describe the loss or retreat of 13 formerly common jarrah-stream species, including mayflies, caddisflies, stoneflies, a dragonfly and an amphipod. They found that more than half of the studied species had almost disappeared, clinging on only in the remaining perennial streams, while others had retreated to subterranean refuges. At least two once-common species were absent altogether.

“We compared the life cycles to a study conducted in the early 1980s, well prior to the onset of seasonal drying, and used this historic life-history data to predict whether each species would adapt to the new flow regime,” says Carey.

Carey explains that even when historical data about species’ life cycles suggested a species’ survival, many of the insects were unable to weather the new drought conditions.

“Life-history traits such as life-cycle timing, number of generations per year, and ability to use desiccation-resistant eggs are commonly used to predict survival under climate change,” she says. “However, there have been few opportunities to directly examine species responses to real climate impacts until now. We found that life-history flexibility was the most important determinant of successful adaptation, not previous life-history traits.”

Carey says the potential loss of these species represents an irreversible upheaval of an ancient ecosystem.

“South-western Australia is a world-renowned biodiversity hotspot, and many of our stream fauna, including dragonflies, caddisflies and mayflies, are found nowhere else on Earth.”

The impacted species also play a crucial role in maintaining the health of freshwater ecosystems by recycling nutrients and offering nutrition to species up the food chain.

“They have also been here for a very long time, and widespread losses of these species will not only reduce the uniqueness of our fauna, but potentially impact the ecosystem processes they moderate,” says Carey.

The team’s results demonstrate that understanding a species’ historical flexibility is of utmost importance to predict its chances of survival in a changing world.

“This is essential, because predictions based on species traits may underestimate extinction risk if species are not flexible,” says Carey. “We need to understand how species respond if we’re to help inform future policy and conservation-management practices.”