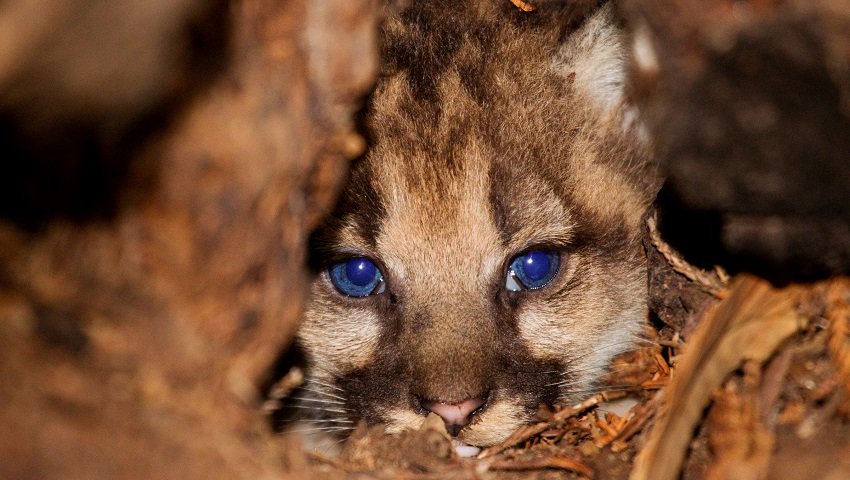 at home in her nursery

Genomes from mountain lions, or pumas, have spawned insights into how to encourage genetic diversification within the striking feline species and boost their health and survival.

Puma concolor – also known as cougars or panthers – were once widespread but are now mainly found in low population densities throughout western North America and much of Central and South America, and many of those are at risk of extinction.

“Habitat fragmentation is causing puma populations to become small and isolated,” explains Megan Supple from the University of California in Santa Cruz, US.

“As a result, many populations are experiencing inbreeding, which can cause reproductive abnormalities that reduce the fitness of the population.”

Supple and a large research team including Nedda Saremi and Howard Hughes Medical Institute investigator Beth Shapiro, both also from UC in Santa Cruz, therefore set out to use genomic sequencing to predict the outcomes of potential conservation measures.

Previous research found that southern Florida’s tiny population of pumas – also known as cougars or panthers – had become perilously inbred with resulting defects like holes in their hearts, kinked tails, missing testicles, and malformed sperm, threatening their health and reproduction.

To address this, eight female cougars were introduced from west Texas in 1995 which successfully improved the population’s health and quadrupled its size from 30 to more than 120 felines.

But the available technology only enabled previous researchers to analyse small snapshots of DNA scattered throughout the genome. This can’t detect long runs of identical genes which can give a more precise measure of inbreeding and how recent it is. {%recommended 9461%}

The analyses enabled the team to identify historic and modern events including population structure, ancestry and recent inbreeding in different groups, as reported in the journal Nature Communications.

“A whole genome sequencing dataset allows us to examine a wide variety of research questions,” explains Supple, “even though the questions may be at different time scales.”

In terms of population viability, analysis of data from two pumas living on different sides of the 101 freeway in Los Angeles revealed significant signs of inbreeding in each sample. However, the regions of the pumas’ genomes that had reduced diversity were different.

This is good news, the researchers say, because a proposed wildlife overpass to reconnect the two populations would help restore lost genetic diversity.

Lines of DNA from a descendant of the Florida population that had been salvaged via translocation revealed a more troubling picture.

“Looking at the genome of that Everglades individual, we see signs of severe inbreeding,” says Supple. “The positive effects of the translocation were short-lived in the population, which may be a characteristic of translocations into small populations.”

But regular influxes of new genetic material into the population via wildlife corridors may buffer the negative consequences of long-term inbreeding, she adds.

“Wildlife overpasses, or other ways of reopening landscape connectivity, are nice solutions to the problem of inbreeding in small and isolated populations because they enable repeated gene flow events.”

Supple notes that reopening landscape connectivity is not a viable solution for the Florida panthers, however, because they are too far removed from their nearest relatives in Texas.

Despite the successful translocation in 1995, it is critical to monitor the population as the study outcomes suggest that inbreeding could recur in the future – and it’s important to stay on top of it, she says.

Once enough long runs of DNA with identical copies accumulate, Shapiro explains, the effects of inbreeding kick in suddenly – it’s not a slow and progressive process.

“The big takeaway is that translocation worked, but the lights are going to go off because they continue to inbreed,” she says.

“This is the first time that whole genomes have been used in this way,” says Shapiro, noting that the work could stop inbreeding in its tracks and help keep whole populations from going extinct.

“By comparing populations and individuals,” says Saremi, “we can make more informed choices when considering candidates for translocation.

Originally published by Cosmos as Saving pumas with genomics