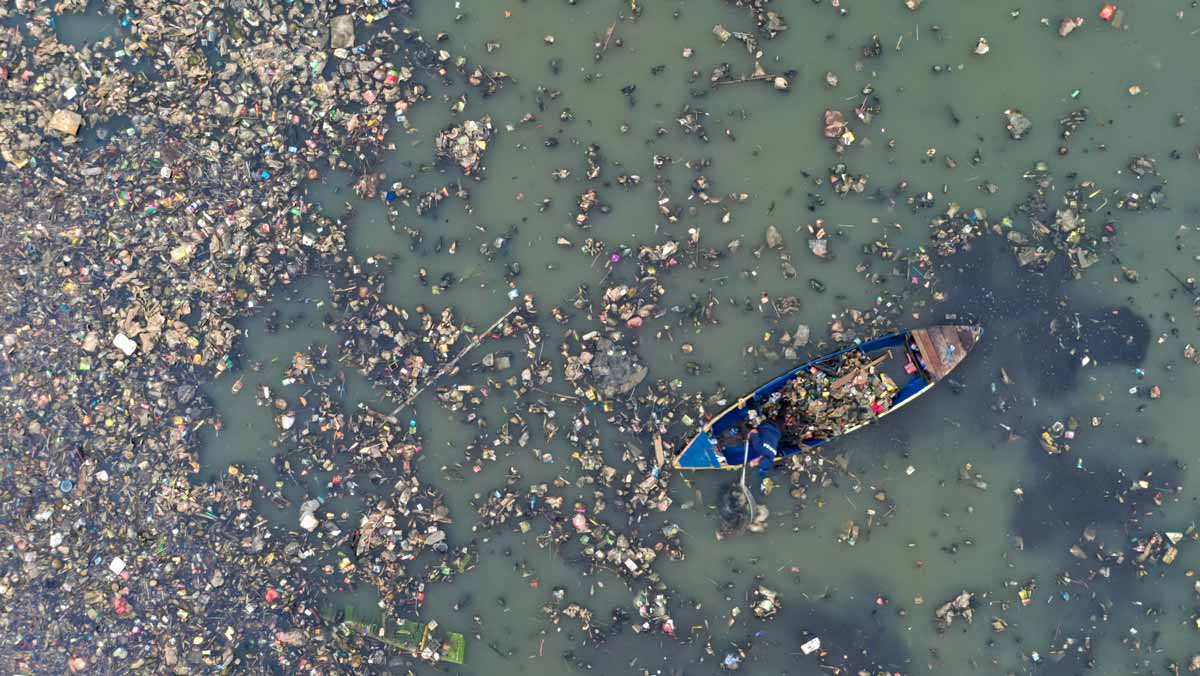 A new, filter-free method of separating microplastics from seawater has been developed in Indonesia.

Researchers in Indonesia have developed an innovative way to remove microplastics from water without the need for expensive filters.

It works, says Dhany Arifianto, an engineer at the Institut Teknologi Sepuluh Nopember in Surabaya, Indonesia, by passing contaminated water through a pipe, while underwater speakers make the pipe vibrate like the sound board of a guitar.

Normally, we think of sound in terms of what we hear. But to an engineer, it’s merely a series of pressure waves. When contaminated water passes through the pipe, the water, being liquid, simply transmits the tone. But microplastic particles, being solid, feel the pressure differently, and are driven away from it, Arifianto says.

Surround them by the same tone coming from all sides, and the only place for them to go is the centre of the pipe. When the water emerges from the pipe, this concentrated stream of plastic can then be diverted, while the rest of the water, now cleansed, flows on. “That’s basically the principle of our research,” Arifianto says, “the force created by sound.”

It’s an important development, because microplastics are a growing threat, both to humans and the environment.

Microplastics are tiny fragments of plastic, produced as larger pieces degrade. The US National Oceanic and Atmospheric Administration classifies them as anything smaller than five millimetres in length. “That’s about half the size of a fingernail clipping,” says Charles Moore, founder of Algalita Marine Research and Education, a nonprofit group in Long Beach, California, that is deeply concerned about ocean plastics.

Moore is a racing-boat captain who first discovered the Great Pacific Garbage Patch, a massive concentration of plastic detritus trapped by currents, when he was sailing from Hawaii to California after a race and found himself surrounded by a sea of plastic trash.

When that happens, he says, they can lodge in tissues of animals that ingest them (including people). “They don’t just pass through, they get absorbed,” he says. “They pass the blood-brain barrier; they lodge in the placenta. They get into brains and change behavior, because the brain is an electrical organ, and plastics are insulators.”

For example, he says, fish exposed to microplastics don’t go as far or spend as much time looking for food as they normally would.

They also contain xenoestrogens: chemicals that behave like artificial oestrogens. One of these is bisphenol A (BPA), a chemical that is on the State of California’s official list of developmental and reproductive toxicants, based on a review of more than 300 scientific studies of its effect on the female reproductive system.

BPA can also have effects on males – enough that a recent review article in Reproductive Biology and Endocrinology provocatively labeled it an “emerging threat to male fertility.”

Moore adds that it also has behavioral effects, causing male rats to hang out closer to the nest than normal, though it’s not clear if that’s because it is feminising them or simply making them anxious – a factor revealed in other studies.

Arifianto’s sound-based cleanup system is still in its infancy, but in lab tests that were scheduled to be presented at the December 2021 meeting of the American Acoustical Society, in Seattle, Washington, his team was able to filter out nylon fragments to an efficiency of up to 99%, and other microplastics to an efficiency of up to 95%. Although, he told Cosmos after he was stranded in Indonesia by US COVID protocols, those results are for fresh water, which is easier to work with than seawater. For seawater, he says, his team has to date only achieved 58% efficiency.

Fifty-eight percent may not sound like a lot – and it wouldn’t be if the goal was to purify drinking water. But Arifianto’s target is more ambitious. He wants to help clean up the ocean, starting in the waters offshore from Indonesia. For that, even 50% efficiency would be an enormous benefit.

To do this, he envisions an array of sonic scrubbers deployed across the narrow straits between his country’s main islands, through which currents circulating between the Pacific and Indian oceans offer perfect locations in which to intercept a lot of microplastics, especially those originating from Indonesia.

It sounds crazy, but the straits aren’t all that wide (the Sunda Strait between Java and Sumatra, for example, is only 24 kilometres across at its narrowest point). And plastics float, meaning that the vast majority of them will be in the top five metres of the water column. To collect them, Arifianto envisions an array of sonic pipes stretching across the straits (except for the shipping channels), moored to the bottom so they stay in place and powered by solar cells, wave energy, or perhaps even the temperature gradient from the top to the bottom of their cables. “There is research [on that] in Japan,” he says of the third option.

The big problem (other than cost), is likely to be noise pollution. “We are generating audible sound,” he says, “so marine life is going to be affected.”

How badly, he doesn’t know, but the sonic level used in his lab experiments is around 50–60 decibels, which is somewhere between the level of a quiet conversation at home and the buzz of conversation in a busy office. Either way, he says, it’s enough to be “quite audible” and “noticeable at quite a distance”. Figuring out how to deal with that will be a priority in future research.

Moore is skeptical of the idea of trying to clean up the ocean. “It’s just not possible,” he says.

What’s ultimately needed, he believes, is to rethink our use of plastics and become “plastic smart”. Or, as his organisation’s website puts it in a banner headline: “First, we change our relationship with plastic. Then, we change the world.”

Arifianto wouldn’t disagree. “I hope I can spread the message that first, we have to stop dumping plastic on the water, whether it’s fresh water or seawater,” he says. “Because it’s going to come back to us in a very harmful way.”

But that doesn’t mean cleanup is useless. “Our work is inspired by the Clean Ocean Project, which put a net in the Pacific to catch ocean garbage.” That was a great idea, he says, but nets can only catch big chunks of plastic. “[So, we thought] how about microplastics?”

Ultimately, Arifianto says, microplastic pollution is a global problem, requiring international efforts. “I hope [our work] is going to reach more people to be aware of the problem and hopefully participate in this global action to clean up.”