but a new discovery of water near the equator could affect future human missions to the Red Planet.

Scientists taking a new look at old data from NASA’s Mars Odyssey spacecraft, which has been orbiting Mars since 2001, have found large deposits of what may be permafrost-like ice near the Martian equator.

The discovery is unexpected, because the region was assumed to be dry, and may one day provide sustenance and food for astronauts.

The water lies in a region of Mars called the Medusae Fossae, which consists of deep layers of easily erodible sediments along the boundary between the planet’s northern lowlands and southern highlands.

It was found by the spacecraft’s neutron spectrometer, which analyses neutron radiation emitted from the Martian surface as it is bombarded by high-energy cosmic rays raining down from outer space.

“These interact with the top metre of the soil and kick out particles, neutrons included,” says Jack Wilson, a planetary astronomer at Johns Hopkins University’s Applied Physics Laboratory in Laurel, Maryland, and lead author of the paper describing the find.

By studying the energy distribution of these neutrons, scientists can determine the elements contained in the top layer of the planet’s surface, particularly hydrogen, a marker for water.

Early on, the Mars Odyssey data showed abundant water in soils near the Martian poles — a finding confirmed in 2008 when NASA’s Phoenix lander dug up chunks of pure ice only centimetres below the surface. But these same early analyses showed very little water at the planet’s equator.

Those early studies, however, had extremely low resolution – in the order of just 520 kilometres. By applying a mathematical technique called Bayesian image reconstruction, Wilson’s team was able to redo the analysis with a resolution of 290 kilometres.

“[It’s] similar to lowering the altitude of the spacecraft by 50%,” he says. “You’re getting a better view of what’s going on.”

They found that while most of the equatorial regions remained low in water, two parts of Medusae Fossae, each several hundred kilometres across, popped out with high concentrations — up to 40% by weight.

It was a startling find, because the Martian equator is warm enough that any ice that close to the surface should long since have vaporised.

Nevertheless, it was there, somehow preserved from a time hundreds of thousands or millions of years ago when variations in the planet’s tilt would have produced climates in which it could have accumulated. Perhaps, Wilson says, there’s a cap-like layer of crusty soil that has helped preserve it. Or perhaps the water is included in heavily hydrated minerals that have somehow been protected from breaking down and releasing their water over the course of geologic time.

Either way, it’s an important find for future manned exploration of Mars, because that much water — whether in the form of ice or heavily hydrated minerals — can be converted not only into drinking water but into rocket fuel, which Wilson notes, “is in large part hydrogen and oxygen.” That means fuel for the return to Earth could be manufactured on Mars — hugely better than having to transport it there from Earth.

Other scientists agree. Rebecca Williams, a Wisconsin-based researcher with the Planetary Science Institute, calls the study “interesting,” adding, “the search is on for equatorial water to support future human exploration. One interesting implication [of this study] is that sites near the Medusae Fossae Formation are more appealing.”

Originally published by Cosmos as Water found near Martian equator 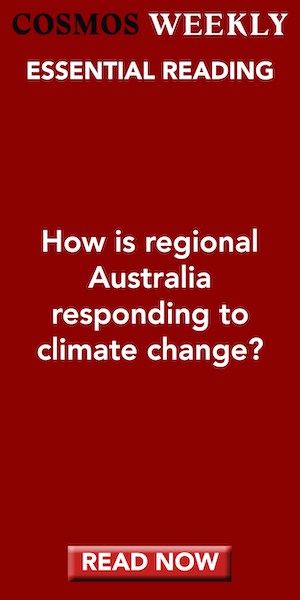