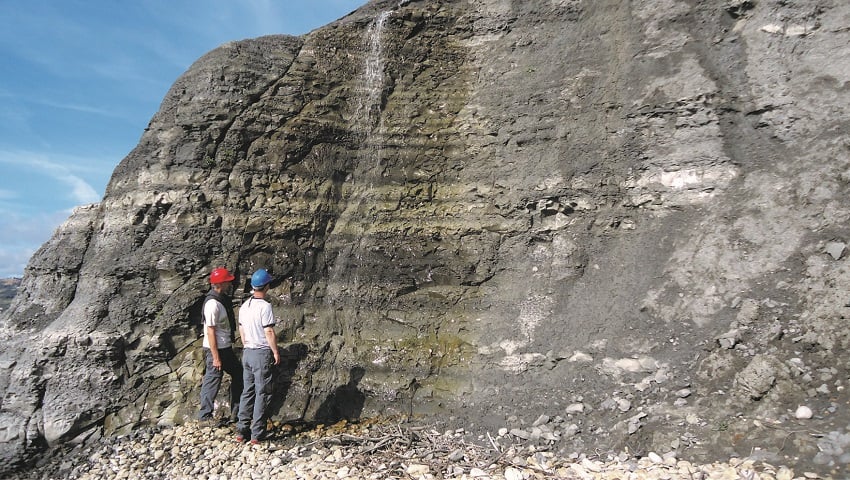 The orbitally paced variations in mudstone composition seen here in Dorset, England, are similar to those of the studied core in Wales. Credit: Micha Ruhl
More on:
solar system

An international scientific team says it can shed fresh light on the complicated interplay of factors affecting global climate and the carbon cycle after studying ancient mudstone deposits in Wales.

In addition, volcanic activity released large amounts of greenhouse gases into the oceans and atmosphere at that point in time, which resulted in major global carbon cycle perturbations as well as global climate and environmental change.

The study, involving researchers from South Africa, the UK, and Ireland, is described in a paper in the journal PNAS.

“Our work shows that for the 18 million years or so in between the Triassic-Jurassic Mass Extinction and the Toarcian Oceanic Anoxic Event, Earth’s global carbon cycle was in a constant state of change,” says co-author Micha Ruhl, from Trinity College Dublin.

“Periodic changes in the shape of Earth’s orbit around the Sun impacted on the amount of energy received by Earth from the Sun, which in turn impacted climatic and environmental processes, as well as the carbon cycle, on local, regional and global scales.

“Although this phenomenon is well known for having caused the glacial cycles in more recent times, the present study shows that these external forcing mechanisms on Earth’s systems were also operating, and controlling Earth’s carbon cycle in the distant past, even during non-glacial times when Earth was marked by hot-house climate conditions.”

Present-day orbital configurations and solar system processes should have resulted in a future return to glacial conditions, the researchers say.

However, anthropogenic carbon release will likely have disrupted this natural process, causing rapid global warming, rather than a steady return to cooler climates.

The study of past global change events and the time in between allows scientists to disentangle the different processes that control global carbon cycle change and constrain tipping points in Earth’s climate system.

A larger international research team, including scientists from across Europe, North and South America and China, will soon begin drilling a one-kilometre deep borehole at the site to retrieve rock samples that they hope will provide even more detailed climatic and environmental information.