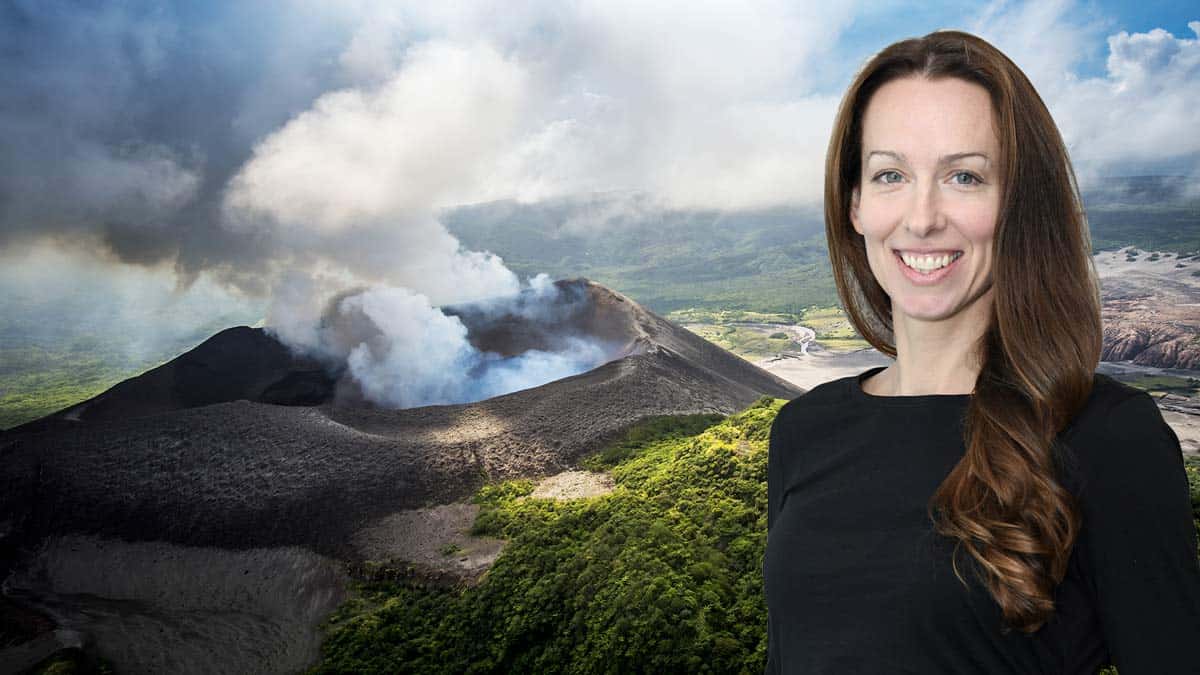 The next big volcanic eruption could have dire consequences for the entire planet.

I feel we are under-prepared for the next large-scale global volcanic eruption. Even here in Australia, we have two potentially volcanically active regions on the mainland. We may live on a very old continent, geologically speaking, but the last eruption on the mainland was only about 5,000 years ago in south-east Australia, at Mt Gambier, and about 7,000 years ago in the north-east of Australia. When you consider that the south-east system (the Newer Volcanics Province) has been active for at least 4.5 million years, 5,000 years is actually quite recent.

The thing that is different about the eruptions within Australia, compared to Hunga Tonga-Hunga Ha’apai in Tonga recently, is that Australia is located in the middle of a tectonic plate rather than on a boundary. We’re not situated on the Ring of Fire, so any future volcanic eruption here would likely bring small amounts of molten rock to the surface and be less explosive, unless the magma encounters surface or ground water, which is an explosive mix. I picture past activity in the volcanic fields here, like the Newer Volcanics Province, a bit like a kind of whack-a-mole game, where eruptions pop up in different places at different times.

As it’s a region that’s considered active, not an individual volcano, it’s harder to understand where the next eruption might come within that area. That makes it hard to understand how future eruptions might work out, or how fast the magma might rise to the surface – which is what you need to know to understand more about the potential warning time of an eruption.

Part of my work is to try to provide Australia protection from volcanic hazards. I’ve been doing studies on the volcanic crystals that have come to the surface in the past – at a microscopic scale, these are like crystal balls looking into the workings of the volcano. They won’t tell me when the next eruption is going to happen, but they can tell me how fast the magma has risen in past eruptions. It may have taken days to go that whole distance from 35-40km deep, or it might take only hours.

It’s still a work in progress, but we’ve learnt that the explosive eruptions we’ve had in Australia are not necessarily as big as what we have seen around the Ring of Fire. But still, the last eruption at Mt Gambier has been estimated by scientists from Monash Uni to have had a volcanic explosivity index (VEI) of four. This was the same VEI as the Eyjafjallajökull eruption in Iceland that grounded planes all across Europe in 2010. The chances of it happening again in Australia in our lifetime is very small. But at the same time, you can never say never – as the pandemic has taught us.

We’re not yet sure what the VEI will be for the eruption that we saw in Tonga, complicated by the fact that it was a very powerful explosive eruption but it didn’t actually produce much volcanic material. But it could end up being four or five. The scale goes from zero to eight, where zero would be like in Hawaii, the kind of lava flow you could walk away from, whereas eight would be a mega-colossal volcanic eruption.

Thankfully the really large super-volcanic eruptions can be tens of thousands, even hundreds of thousands of years apart. Obviously, if there is one, we’re going to be in a lot of trouble.

If you come back one order of magnitude, the last VEI of seven eruption was Tambora in Indonesia in 1815. That was the eruption that led to the “year without a summer”, with crop failures around the world.

There were a lot of impacts felt globally after that eruption, but this was a time when our infrastructure systems were very different to what they are today. In the Asia Pacific region, eruptions of similar magnitude to Tambora (VEI 7) are predicted to happen around every 400 years.

Globally today there would be huge social, environmental and economic costs of a large-scale eruption like that at Tambora. There’s obviously the grounding of aeroplanes because it’s not safe for them to fly; you have widespread contamination of open drinking water supplies.

Today we’ve got electrical power – if you have volcanic ash falling on the lines and the transformers, it can cause arcing events which can shut down the system. Volcanic ash would also introduce delays in the global positioning system that we all rely on every day.

Then there’s the cost in human lives: when you estimate the number of people in the world living close to active volcanoes, within 100km, it’s estimated to be between 800 million to over a billion people. We need to be ready.

A volcanic eruption could happen anywhere in the world and still have an impact here in Australia. We have to remember we are very close to some of the most active volcanic regions on the planet, in Indonesia and New Zealand, which have produced the largest volcanic eruptions in the past. These are our neighbours, but an eruption doesn’t even need to be close to us.

Due to the way that the winds and air currents move around the world, the VEI five eruption in Chile that happened in 1991 would ground planes in Australia if it happened today. Back in 1991 planes here flew through the ash cloud not knowing what it was. In 2011, we again saw volcanic ash reaching Australia from an VEI 5 eruption in Chile, from Puyehue-Cordón Caulle volcano, temporarily grounding flights with huge economic impact to Australian air carriers and disruption to travellers.

Our awareness of the hazards isn’t properly on Australia’s radar. Quite understandably, we are more concerned about natural hazards we encounter regularly. If you go to Victoria’s emergency website, for example, it talks about tsunamis, earthquakes, bushfire, flood, drought – but there is no mention of volcanic hazards. But this kind of interruption might come in anybody’s lifetime.

We know volcanic ash from eruptions outside of Australia has fallen here in the past because we’ve found volcanic deposits in the sediments of our lakes. People also reported small gritty bits of rock and ash falling on them in Western Australia after the 1883 eruption of Krakatau (often misspelt Krakatoa).

So we know volcanoes have impacted Australia in the past. I’m not sure we properly realise the potential disruption a future large-scale eruption could bring to Australia.

I’m now conducting a survey of the Australian public to find out their opinion about volcanic hazards and risk from activity both within and outside the country. If you live in Australia, are over 18 and have 10-12 minutes to spare, I’d love to have your input in the survey.

As told to Graem Sims for Cosmos Weekly.

Originally published by Cosmos as Our volcano blind spot Heather Handley is volcanologist and geochemist who has worked on some of the most active volcanoes on the planet. She is an Adjunct Associate Professor at Monash University, Honorary Associate Professor at Macquarie University, and Governing Councillor of the Geological Society of Australia. She uses the chemistry of volcanic rocks and their minerals to better understand how volcanoes work and what triggers volcanic eruptions in order to reduce volcanic risk. She is currently writing a book on Australia’s volcanoes for CSIRO Publishing, due to be released next year.