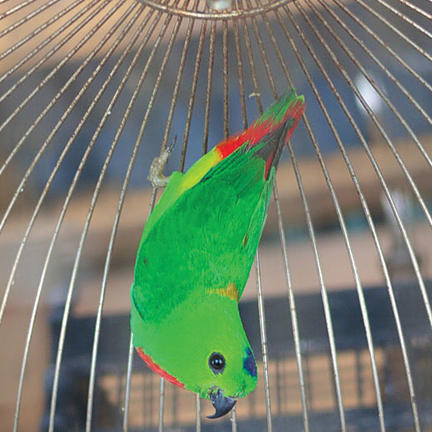 a bird from the tropical lowlands of South-East Asia

It’s sometimes said that we are loving nature to death – with our sightseeing traffic jams for bison loitering in Yellowstone National Park, or our safari vehicles huddled together to watch lions yawn in the Masai Mara. But few people take their affection for nature to such a destructive extreme as the bird lovers of Indonesia and Malaysia.

Roughly 35% of homes in that Southeast Asian region keep birds as pets. They love the sound of their singing, and build them elaborately carved mahogany cages. But they prefer birds that are wild caught, not captive-bred, and the more unusual the better. The result, according to a study in the journal Biological Conservation, is that they are drastically reducing wild bird populations and probably driving some species into extinction.

The region is already notorious for hacking down huge areas of old growth forests for lumber, or to make room for palm oil and rubber plantations. But the pet trade seems to be almost as destructive to bird life, finishing off what deforestation has begun. Even birds that might have survived in secondary forest or on agricultural lands are vanishing.

Princeton University’s Bert Harris, lead author of the study, focused on bird markets in Medan, Sumatra, “one of the primary hubs of the Asian wildlife trade”, with more than 200 bird species typically for sale. In a region with almost no field studies to monitor bird populations in the wild, Harris and his co-authors theorised that recording price and volume for different bird species in the marketplace could serve as a quick and dirty tool for detecting population trends in the wild.

“There were traps and snares everywhere, even in national parks”

It worked. By comparing the market data with a historical sample from 1987, the study identified species that were increasing in price while decreasing in volume as the most acutely threatened, and the bigger the price increase the worse the threat. It is of course basic economics that scarcity tends to drive up the price for anything in high demand. And in some cases, the threat to a species was also already well known. The straw-headed bulbul, for instance, is now extinct in Java, and probably in Sumatra, too, and it’s on the endangered species Red List, maintained by the International Union for Conservation of Nature.

But until the marketplace said so, the Red List didn’t know that the white-rumped shama was in equally bad shape. “And that is entirely due to trapping,” says Harris, “because it’s not an old-growth bird”. In fact, seven of the nine severely declining species are found in degraded forests and agricultural areas, when they can be found at all. That means they might have survived the deforestation, were it not for the pet trade.

The marketplace also revealed that bird lovers were willing to pay more for shamas from small offshore islands near Sumatra, because they tend to be distinguished by different features, such as the length of the tail, or the manner of their singing. Some researchers believe these island varieties may be separate species. But collecting for the pet trade means they may be wiped out before anybody knows for sure.

For his study, Harris wanted to compare a forest without bird traps to a forest with traps – but failed to do so because “there were traps and snares everywhere, even in national parks”.

The main trapping technique is to make cages by hand out of bamboo, with a decoy bird in the bottom, and a trapdoor on top to retain birds attracted by the decoy’s call. “The other method is to put bird lime – sticky goo from the latex of different forest species – on branches nearby.” Sometimes an entire flock of the Sumatran laughing thrush or some other species would come over to investigate and be stuck there in a row, to be picked off one by one like items from the shelf at the grocery store.

At the bird markets in Medan, different species may sell for as little as ten cents to as much as $20,000. The expensive ones go into singing competitions. Harris, who attended one such competition, says it consisted of 30 caged shamas under a roof, with their owners crowded behind a fence, “calling out to their birds, or whistling to them, or yelling at them”. Harris couldn’t tell one bird from another by its song. “Whichever bird puffs its chest out the most and dances around wins.”

Religion also drives the trade. One way Buddhists gain spiritual merit is by ritually freeing birds from their cages. But to supply this market, someone has to put the birds into cages in the first place. Because the birds are generally released in cities, worlds away from their native habit, almost all of them die.

Harris says conservationists and ornithologists have not taken advantage of marketplace trends in the past, in part because it so depressing: “People don't want to go work in these smelly markets. People want to go into the rainforest and count birds.” The marketplace exposes them instead to birds crammed into filthy cages, often with dead birds left to rot on the bottom. Birds that are not suited to caged life, including pittas, woodpeckers and kingfishers, are often among the merchandise, and it can be heartbreaking for a bird lover to see.

The new study found that sending a team of four Indonesian birders into the forest to conduct a proper survey over a six-week period cost $3,097. To get the same sort of information from the marketplace, it was necessary to send one person out on four visits to record prices and species, at a cost of $131. With money for conservation almost nonexistent in Indonesia, that makes marketplace data an irresistible tool for understanding the pet trade.

Harris says Indonesia is unlikely to take any action to stop the trapping any time soon: “It doesn't seem to be a high priority. Indonesia has a lot of problems to deal with.” But the Wildlife Crimes Unit there has recently taken significant action against traffickers, including a sting that broke up a gang of tiger poachers. So there is hope.

Readers can push for more of that kind of news by supporting conservation groups that are active in the region, particularly the Wildlife Conservation Society and the World Wildlife Fund.