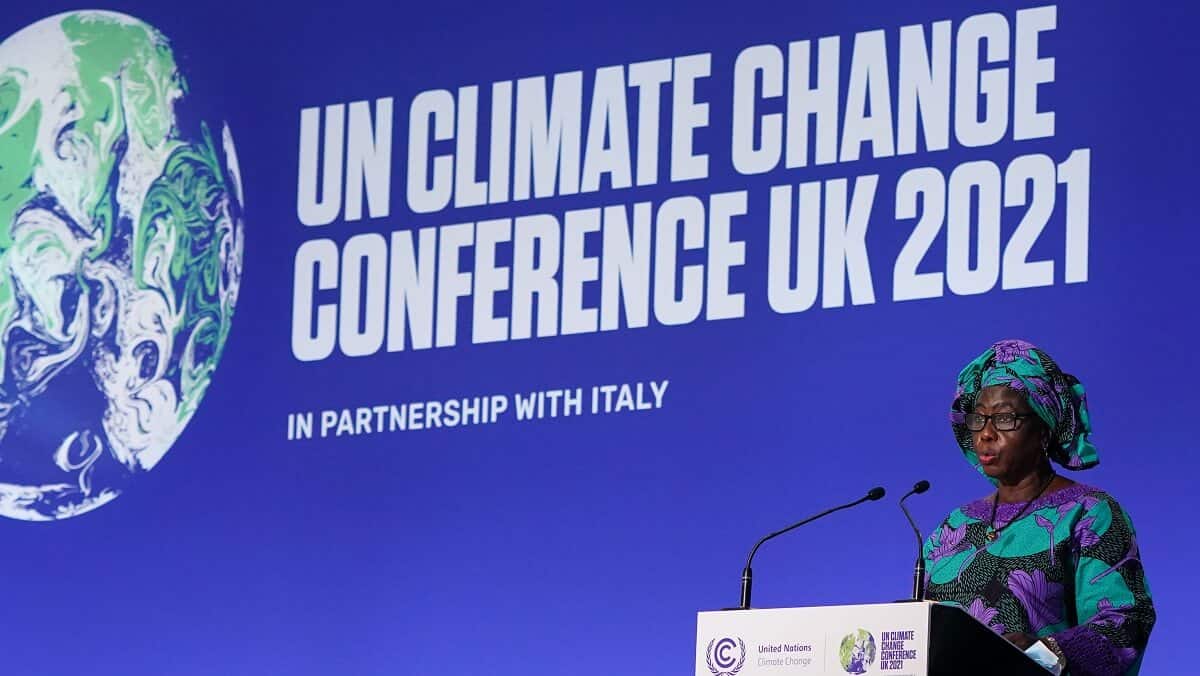 Her Excellency Ms. Isatou Touray, Vice President of the Gambia addresses delegates on day ten of the COP26 at SECC on November 09, 2021 in Glasgow, Scotland. Credi: Ian Forsyth/Getty Images.
More on:
deforestation

The United Nations Climate Change Conference (COP26) wraps up at the end of this week, with a raft of new commitments. Last week, world leaders made two major pledges to cut methane emissions and reduce deforestation by 2030, with Australia refusing to commit to the former.

As the international conference comes to an end, where do we stand? And what do climate experts make of COP26 – success or failure?

Land use and agriculture

One of the major agreements reached at COP26 is the Glasgow Leaders’ Declaration on Forests and Land Use, a commitment to halt and reverse deforestation and land degradation by 2030.

Building on this pledge, at the end of last week, 45 governments promised urgent action on sustainable agriculture and land use. Brazil, whose controversial president Jair Bolsonaro has a patchy record on deforestation, announced plans to scale its ABC+ low carbon farming programme to 72 million hectares, saving approximately one billion tonnes of emissions by 2030. Meanwhile, Germany pledged to lower its emissions from land use by 25 million tonnes by 2030, and the UK promised to engage 75% of farmers in low carbon practices by 2030.

COP26 president Alok Sharma says: “If we are to limit global warming and keep the goal of 1.5°C alive, then the world needs to use land sustainably and put protection and restoration of nature at the heart of all we do.”

Experts have noted that unlike past climate conferences, COP26 has focused as much on climate adaptation as it has on climate mitigation (the reduction of emissions and pollution).

Speaking last week, John O’Brien, a partner in energy transition and decarbonisation at Deloitte, said: “This one has had a lot more around resilience, adaptation, physical risk, biodiversity and valuing natural capital.

“So, it’s… sort of the first COP where there’s been really close integration of adaptation and mitigation.”

Monday was Adaptation and Loss and Damage Day at the conference, and $232 million was committed to the Adaptation Fund from the UK, USA, Canada, Sweden, Finland, Ireland, Germany, Norway, Qatar, Spain, Switzerland, Quebec and Flanders. Meanwhile the UK announced £290 million (AUD$500 million) in new funding for global adaptation projects.

In a statement on the day, Sharma said: “We know that even if we stopped polluting our world tomorrow, there will be negative consequences for many millions. And that is why issues such as adaptation are so important.”

Tuesday was Gender Day at COP26, as world powers grappled with the gendered impacts and responsibilities of climate change. It’s an important message; in 2017, a UN report found 80% of those displaced by the climate emergency were women, and climate-related events will prevent four million girls in lower-income countries from completing their education in 2021, according to Sharma.

At COP25 in 2019, world leaders developed the Gender Action Plan, in acknowledgement that women and girls are disproportionately affected by climate change. This time around, a number of countries have pledged to include gender equality as a core principle in their climate policy, including Canada and Germany. But beyond these vague statements, there is limited evidence of what will practically be done to address this issue.

Last week, optimism abounded when a study from Climate Resource found that if the new COP26 pledges were successful, warming could potentially be kept below 2°C – putting us on track for that target for the first time in history. But on Tuesday, Climate Action Tracker released their own report revealing that projected warming from COP26’s new 2030 pledges actually hovers at 2.4°C, well beyond an acceptable threshold.

Research predicts that beyond 1.5°C of warming, most countries will experience severe impacts, and some island states will be pushed beyond the point of survival by impacts such as sea-level rise and increasingly violent storms.

It’s a sobering reality, and worth noting that even the Climate Resource study relies on COP26 pledges being met, which is far from a given. The global community has a history of falling short of its ambitious targets; very few countries are on track to reach even their 2015 Paris Agreement goals, let alone new pledges.

So, is there a case for optimism?

“The pleasing thing is that countries have come a fair way since Paris,” says Wesley Morgan, a researcher at the Climate Council and research fellow at Griffith University’s Asia Institute, who specialises in climate science and the impact of climate change on Australia and the Pacific.

“A hundred plus countries have announced that they are planning to shift to a net-zero emissions economy, so that’s pleasing.

“I think it’s promising that all of the G7 countries pledged to collectively halve their ambitions this decade, and almost all of the advanced economies have set new, stronger targets to cut emissions by 2030, with most of those around about a cut of 45 to 50% by 2030. That’s very significant.”

But, notably, Australia is walking away from COP26 having made no such changes to its 2030 commitment.

And, ultimately, “there is widespread recognition amongst the countries that we’re still an awful long way away from where we need to be,” Morgan says. “We’re still headed for 2.4 degrees.

“Really, in Glasgow, the world has clarified that we’re nowhere near where we need to be for reducing emissions by 2030, and we really need to be halving global emissions this decade.”

As for Australia’s minimal contribution to commitments?

“There’s been this idea that Prime Minister Morrison might show up with a net-zero announcement, which has no credible pathway to actually deliver net-zero emissions, and then come home and that would be enough to avoid international scrutiny. I think the take-home message is that that’s not enough.”

Originally published by Cosmos as COP26 update: Where do we stand?