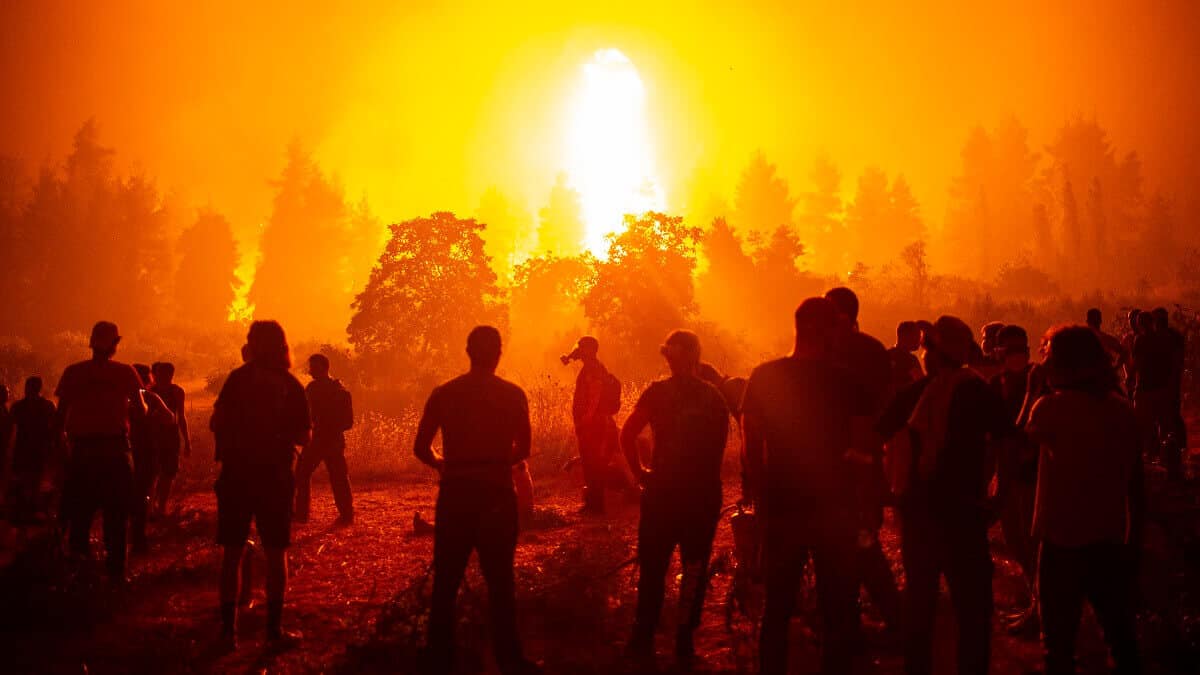 The Intergovernmental Panel on Climate Change (IPCC)‘s sobering “code red for humanity” report comes on the heels of months of devastating weather events around the world. Our front pages have been dominated by photos that look as if they’ve come from a film – images of heroic teams tackling forest fires against a bright orange sky, of planes dropping water and fire retardant, cars sinking into flooded streets and destroyed buildings.

One image – that of a ferry, carrying evacuees from the Greek Island of Evia, surrounded by fire, helpless and in the middle of crisis – drew comparisons to the ferry scenes in the 2005 remake of War of the Worlds. In the film, people poured onto a vehicle ferry in a desperate attempt to escape the extraterrestrial invasion.

In Greece, the ferry made safe landing, and all passengers were accounted for. But in the film, few, bar the protagonists, survived that moment. While War of the Worlds ends happily – with the alien lifeforms that had ravaged the world succumbing to their vulnerability to microbes on Earth – the footage from Greece is just one scene in a story for which the ending is not yet fully written.

It might seem frivolous to compare such moments to films, but these comparisons play an important role in helping us to comprehend and make sense of particular moments in history. Like all works of art, films reveal much about the social and political zeitgeist in which they are conceived and produced, often acting as magnifying lenses for humankind’s hopes and anxieties.

Psychoanalysis researcher Vicky Lebeau has noted that films can reveal the desires and fears of the societies that watch them. We have seen this in science fiction films, such as Invasion of the Body Snatchers and The Day the Earth Stood Still, which flourished during the cold war, inspired by the space race and the arms race.

The proliferation of blockbuster disaster films just before the turn of the millennium (Twister, Dante’s Peak, Armageddon, Deep Impact, to name a few), fed off theories that the world would end as we entered the year 2000. And it is also no accident that during the early months of the COVID pandemic the most-watched films online were Contagion, Outbreak and 28 Days Later –- all of which depict degrees of pandemic apocalypse.

Through these stories, directors have offered us an enthralling yet terrifying glimpse of what the end of the world might look like. It could be caused by zombies (Walking Dead, I Am Legend, Shaun of the Dead), biological demise (Children of Men, Logan’s Run), climate change (The Day After Tomorrow, Snowpiercer, Flood), nuclear accident or war (Dr. Strangelove), or ancient prophecy (2012).

However, none of these are truly end-of-world narratives. Apocalyptic and post-apocalyptic films start with the risk of total destruction, but more often than not, after the cataclysmic event of the story, a form of normality returns –- balance is restored to the world and life can once again move forward. This way of storytelling brings these films closer to the true meaning of apocalypse.

The root of the word “apocalypse” comes from the ancient Greek term αποκαλύπτειν (apokalýptein), which translates roughly as “unveiling” or “revealing”. The implication being that the near destruction of the city or planet allows for a new understanding, a shift in priorities and a new way of seeing the world – or a renewed and better existence.

This is some horrifying War of the Worlds shit right here. We have got to start electing governments that actually fight climate change, above all, and start demanding more of ourselves and of companies that can change things. https://t.co/9JDGI2fWgH

The scenes of flooding and fires that fill our news programmes echo those we see in movies. But for them to be truly apocalyptic, rather than merely world ending, they must reveal something to us. As we watch the real-world events unfold, the IPCC report makes clear what they reveal – that humans have changed the climate and we are on a trajectory to make much of our environment unlivable. But unlike the films, not everyone is going to be saved in 90 thrilling minutes.

By comparing reality to films, we are seeking the hope for renewal that these apocalyptic and post-apocalyptic narratives give us. Nevertheless, they are ultimately fiction. While rehearsing the end of the world through film can exorcise fears, at the same time they may have desensitised us, lulling us into a false sense of security that all will be well in the end – and that we are immortal.

If our own apocalypse is a three-act film, then the last 200 years of environmental harms have been the setup, the exposition. We are now at the moment of confrontation. We all, as the lead characters, must confront the reality of what is around us. If not, the third act, the resolution, may not be the ending we hope for. As French philosopher Jacques Derrida warned: “the end approaches, but the apocalypse is long lived”.