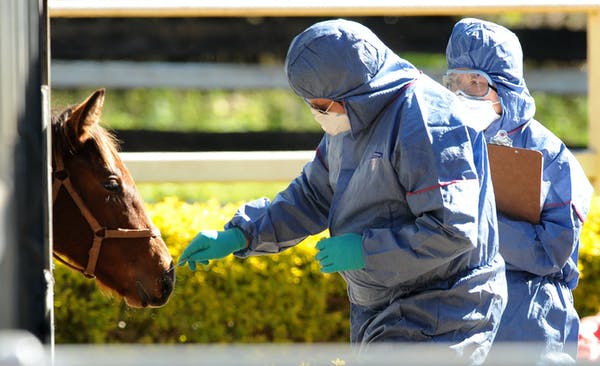 Biosecurity officers taking a swab from a horse during the 2008 Hendra virus outbreak. Credit: Dave Hunt/AAP

With genetic analysis suggesting COVID-19 originated in animals before it spread to humans, now is a good time to bear in mind zoonotic diseases are closer to home than people might think, says a UNSW researcher.

Whether it’s bin chickens raiding rubbish bins, pigeons flocking to alfresco dining leftovers or cuddles with the family pet, animals are an intrinsic part of our lives – so, can “everyday” animals really make us sick?

Virologist Dr Sacha Stelzer-Braid said while most people had a low risk of catching a zoonotic disease, a recent outbreak of “parrot fever” in the Blue Mountains showed what could happen when an animal disease spilled over into humans.

Globally, more than 60 per cent of all human pathogens are zoonotic organisms.

“So-called ‘parrot fever’ is a zoonotic infection and it’s nothing new; such infections occur often, all around the world,” says Stelzer-Braid.

“For example, Ebola and Middle East respiratory syndrome (MERS) are well-known viruses which spread from animals to humans, while a recent study on swine flu viruses highlights the need to remain vigilant in our surveillance of viruses with ‘pandemic potential’.

“But what is new with SARS-CoV-2 – the strain of coronavirus that causes COVID-19 – is its ability to transmit easily and quickly between humans, including from asymptomatic carriers who don’t appear to be infectious.

“So, COVID-19 has heightened awareness around the dangers of people catching zoonotic diseases.”

While many people have a low risk of catching a disease from an animal and becoming seriously ill, Stelzer-Braid says there were high-risk groups who were more vulnerable.

“Zoonotic diseases are more common than people would realise, but for most healthy people they should not be a major problem,” she says.

“However, if you are pregnant, very old or very young, or immunocompromised – so, your immune system is weakened – then you are more susceptible to picking up infections generally and the infection will likely be more severe than in a patient from a low-risk category.

“So, people in high-risk groups need to be aware of this and take precautions to prevent transmission – particularly when it comes to zoonotic diseases.”

Stelzer-Braid said some people with a higher risk might already know what to do to stay safe.

“Pregnant women are mindful about these kinds of things, such as not being able to eat particular foods like undercooked meat or unpasteurised cheese.”

Stelzer-Braid, who began her research career in avian influenza (H5N1) 15 years ago, said H5N1 was an example of a virus which passed from birds to humans.

“With avian influenza, also known as bird flu, it’s endemic in wild birds overseas – so, it’s there all the time and wild birds don’t get too sick from it.”

“The domesticated bird becomes sick from the virus and that’s how a human can get H5N1.”

In Australia, the recent Blue Mountains outbreak of psittacosis or ornithosis – popularly known as “parrot fever” – was caused by the bacterium Chlamydia psittaci, carried by birds.

In 2018, the most recent year available, NSW reported seven cases of psittacosis..

“Australia has many wild birds and the bacterium is present in bird populations across NSW – so, every now and then there are psittacosis outbreaks here,” says Stelzer-Braid.

“And, infected wild birds can come into contact with domesticated birds – so, there’s a chance to spread it through captive birds too.

“People just need to be careful around wild birds – don’t touch or share your food with them.”

Stelzer-Braid says people with psittacosis had flu-like symptoms and were treated with antibiotics.

“More serious complications would depend on having comorbidities that make you more susceptible.”

“For example, older people would generally find it a lot more difficult to fight off an infection like that, but it’s an uncommon disease.”

If people had bird feeders in their gardens to attract wild birds, they should keep the feeders clean and away from food preparation areas.

“It’s nice having birds visit your garden but you need to change the seed and sanitise the feeder regularly; don’t let it sit there and fester.”

“Make sure the feeder is not anywhere near your kitchen or where you eat.

“But I would advise against having a bird feeder if there are people in a high-risk category in your household.”

A parasite in cats

Another zoonotic disease people should be aware of was toxoplasmosis from the Toxoplasma gondii parasite – one of the world’s most common parasites.

“This is really important for pregnant women because toxoplasmosis can cause miscarriage, premature birth and other serious complications in babies,” says Stelzer-Braid.

“People can catch it through contact with infected cat faeces and eating or handling undercooked, contaminated meat.

“If a cat has toxoplasmosis, it excretes the parasite in its faeces for between one to three weeks from the time of infection.

“Cleaning the kitty litter box or touching anything in your house or garden that’s been contaminated by cat faeces then is a potential source of infection.”

It might not be obvious if a cat was carrying T. gondii, because most cats infected with the parasite showed no signs of disease.

“So, people in those high-risk categories need to be careful if they come into contact with cats.”

“Wear a mask and gloves if you are cleaning the kitty litter tray and wash your hands afterwards.”

Another zoonotic disease which might not be readily apparent in the infected animal host – in this case, turtles – but could cause illness in humans, was salmonellosis, says Stelzer-Braid.

Turtles can carry salmonella bacteria in their droppings, even if they look healthy and clean, and people can become infected if they touch the turtle or anything in its enclosure.

“There was a salmonella outbreak amongst people with pet turtles in the United States and many children were affected.”

“Children don’t always wash their hands and then they put their hands in their mouths – so, infection can spread that way.

“A salmonella infection causes things like abdominal pain, diarrhoea, vomiting and fever, but again, it can be a lot more serious in high-risk populations – for example, the death of a baby in the US was linked to salmonella from a small turtle.”

Farms and the outback

In regional areas, the zoonotic diseases of brucellosis and Q Fever were ones which people should be aware of, says Stelzer-Braid.

NSW reported nine cases of brucellosis and 224 cases of Q Fever in 2018, the most recent year available.

“Brucella bacteria, which causes brucellosis, is endemic in wild pigs in Queensland and northern NSW,” she says.

“People can catch brucellosis if they come into contact with those wild pigs or their droppings and it causes a flu-like illness.

“Brucella bacteria has also been found in dogs that have been pig-hunting or ate raw wild pig meat.”

In NSW, cases of brucellosis have also been reported in returned travellers who consumed unpasteurised dairy products overseas.

Q fever, a bacterial infection, could also cause a severe, flu-like illness and was mainly spread from cattle, sheep or goats.

Finally, Stelzer-Braid reminds people to avoid becoming complacent with hygiene practices, even if they were at low risk of catching a zoonotic disease.

“Vigilance with hygiene is still an important message for the community – particularly at this time when older people are doing it tough with the coronavirus generally having a more serious impact on them,” she says.

“Even if you’re healthy, you still need to wash your hands after touching pets and their belongings, before you prepare food, eat and things like that, which hopefully people do anyway.

“Remember, domesticated animals are not constantly carrying diseases harmful to humans, but if they get an infection, they might not show any symptoms and could still pass a zoonotic disease onto you.”