Home ■ Earth ■ Climate ■ Lessons to learn from the Last Interglacial 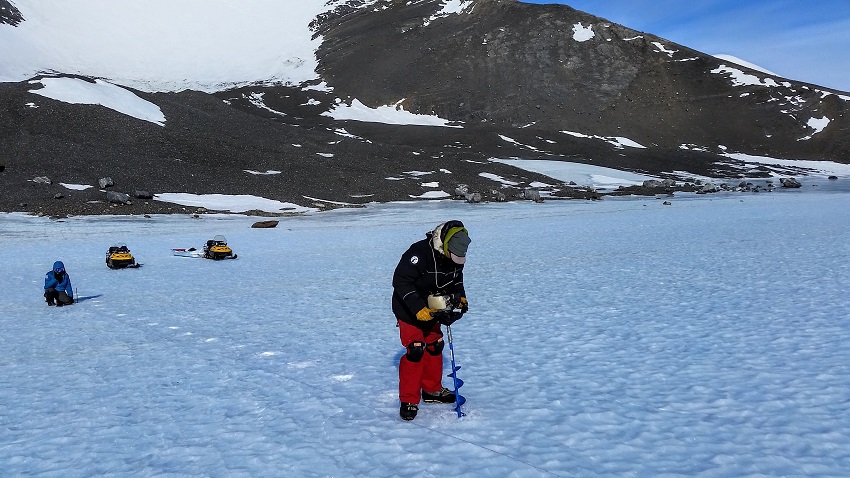 And there are two sobering lessons in these findings, suggests Chris Turney from Australia’s UNSW Sydney, lead author of a paper in the journal PNAS.

The first is that most ice loss occurred early in the Last Interglacial period (129,000-116,000 years ago), showing how sensitive the Antarctic is to higher temperatures.

The second is that it probably took less than two degrees Celsius of ocean warming for it to occur.

Interglacial periods occur between ice ages, and the Last Interglacial was the last such period prior to the current one – the Holocene.

Now is different, in large part because of human contribution to global warming, but Turney and his colleagues say the nature of the Last Interglacial makes it a useful research point to understand how the planet responds to extreme change.

They travelled to the Patriot Hills Blue Ice Area, at the periphery of the West Antarctic Ice Sheet, where they used a different approach to collecting sample. While most researchers drill down, they came in horizontally.

“Instead of drilling kilometres into the ice, we can simply walk across a blue ice area and travel back through millennia,” says Turney. “By taking samples of ice from the surface we are able to reconstruct what happened… in the past.”

Unlike the East Antarctic Ice Sheet, which mostly sits on high ground, the West Antarctic sheet rests on the seabed. It is fringed by large areas of floating ice, called ice shelves, that protect the central part of the sheet.

As warmer ocean water travels into cavities beneath the ice shelves, Turney says, ice melts from below, thinning the shelves and making the central ice sheet highly vulnerable to warming ocean temperatures.

Through isotope measurements, the team discovered a gap in the ice sheet record immediately prior to the Last Interglacial and coinciding with the extreme sea level increase, suggesting rapid ice loss from the West Antarctic sheet.

The volcanic ash, trace gas samples and ancient DNA from bacteria trapped in the ice all support this finding, they say.

Using data gained from their fieldwork, they ran model simulations to investigate how warming might affect the floating ice shelves. These shelves currently buttress the ice sheets and help slow the flow of ice off the continent.

The results suggest a 3.8-metre sea level rise during the first thousand years of a two-degree warmer ocean. Most of the modelled sea level rise occurred after the loss of the ice shelves, which collapsed within the first 200 years of higher temperatures.

The consensus of the Intergovernmental Panel on Climate Change (IPCC) 2013 report was that global sea level would rise 40-80 centimetres over the next century, with Antarctica only contributing around five centimetres of this. However, Turney’s team is concerned that it could be much greater.

“Recent projections suggest that the Antarctic contribution may be up to ten times higher than the IPCC forecast, which is deeply worrying,” says co-author Christopher Fogwill, from the University of Keele, UK.

“Our study highlights that the Antarctic Ice Sheet may lie close to a tipping point, which once passed may commit us to rapid sea level rise for millennia to come.”