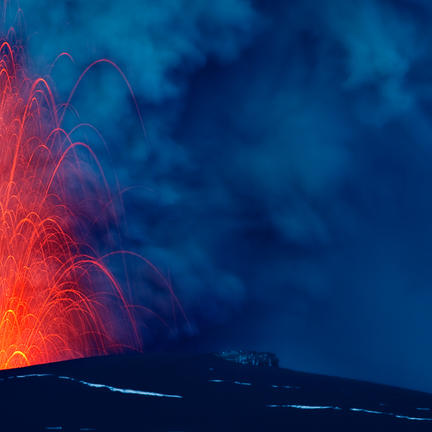 A cluster of volcanic explosions in the sixth century didn’t just shake up the climate – they also brought on massive societal upheaval across Asia and Europe, a study suggests, including the fall of the Sasanian Empire and spread of the Plague of Justinian which killed up to 50 million people.

Ulf Büntgen from the Swiss Federal Research Institute and colleagues found a period of dramatic cooling in the sixth and seventh centuries – dubbed the Late Antique Little Ice Age – that coincided with human migration, pandemics and political turmoil.

They reported their work in Nature Geoscience.

To determine the climate of the time, the team analysed growth rings from trees in the Austrian Alps and Russian Altai-Sayan Mountains.

A fresh ring grows each year during the summer months – June to August in the northern hemisphere. But in cooler summers, the ring is comparatively thin.

By counting the rings and measuring their width, the researchers pinpointed the cool period spanning 556 CE to around 660 CE.

This directly followed a bunch of volcanic eruptions in 536, 540 and 547 CE, which were determined using ice core data.

Volcanoes can cause climate cooling by spewing large volumes of small particles – sulfate aerosols – into the atmosphere, blocking sunlight.

And even though the Russian and Austrian sites were around 7,600 kilometres apart, their tree ring width patterns matched, showing the cool period extended all the way across Eurasia.

“This was the most dramatic cooling in the northern hemisphere in the past 2,000 years,” Büntgen says.

So how does an ice age – even a “little” one – affect society?

That civilisations were shaped by the climate is not a new concept – books have described links between the two for more than a century, writes Princeton University historian John Haldon in a News & Views article.

Untangling those complex relationships is tricky, but how a civilisation is able to react and respond to a “thermal shock”, such as abrupt cooling, and any knock-on effects, may explain why some thrived while others failed.

For instance, as the ice age killed crops and pastureland, plague and famine became rife.

Central Asian nomadic tribes moved towards China – perhaps in search for pastureland. This led to hostilities between the nomads and rulers of the northern China steppes.

As the Eastern Romans sided with the steppe populations, they were able to defeat the Sasanian Empire – the final empire in Persia before the rise of the Arab Empire.

The researchers acknowledge that any causal links between climate and large-scale human events such as these must be treated with caution.

“With so many variables, we must remain cautious about environmental cause and political effect, but it is striking how closely this climate change aligns with major upheavals across several regions,” Büntgen says.

Related story:
Tambora, the volcano that shook the Earth