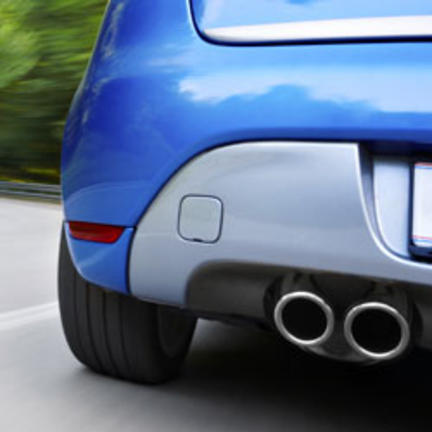 Advances in thermoelectrics open the way to generate electricity from heat sources such as a car's exhaust. Credit: Marin Tomas/Getty Images

Capturing the heat from your car’s exhaust or your computer and turning it into power has just become a hot prospect. Mercouri Kanatzidis from Northwestern University has discovered that tin selenide, a well-known crystalline material long dismissed by experts in the field, is actually exceptionally efficient at converting heat into electricity. The finding smashes Kanatzidis’s own two-year-old record for a thermoelectric material – a 20% improvement that surprised even him.

“Tin selenide was not supposed to be a good thermoelectric material. No one thought it was worth looking at,” Kanatzidis says.

Thermoelectrics are crystalline materials with the very useful property that if you heat one end of them, an electric charge starts to build at the opposite end. “If you’re an electron near a hot end, then you want to ‘get out of the kitchen’ and get to the cold end, because it’s lower energy,” explains Kanatzidis. The clustering of electrons at the cold end can be tapped as a source of electricity, and the larger the temperature gradient, the stronger the effect. Heat one side of a thermoelectric body with the heat lost from a car engine or computer chip and the power generated could be used to boost their batteries, helping them run further.

To work efficiently, a good thermoelectric material needs two key properties – high electrical conductivity, so the electrons can move, and low thermal conductivity, to keep the hot end hot and the cold end cold. But maximising one while minimising the other is difficult – materials tend either to conduct both electricity and heat well (such as metals), or both poorly (think plastics).

For over 40 years, scientists made little headway. Thermoelectric materials are ranked by combining their electrical and heat conductive properties into an overall “figure of merit” called ZT. For decades, the best thermoelectrics had a ZT of around 1 – far too low for any but the most niche of applications. For example, NASA used them to power electrical systems in its deep space satellites – a piece of plutonium kept one side hot, while the chill of outer space kept the other side ultra-cold. But their poor efficiency at converting heat into power simply didn’t justify their cost for more down-to-earth applications.

Heat travels through a material as vibrations in the structure, so the
more rigid a material is the better it conducts heat.

“It’s only in the last decade that ZT has moved above 1,” says Kanatzidis. But as researchers get increasingly good at manipulating materials at the nanoscale, momentum is building. In 2012, Kanatzidis reported in Nature a material called lead telluride with the record ZT of 2.2. In his latest publication, also in Nature, he reports that tin selenide smashes that figure with a ZT of 2.6.

Kanatzidis was drawn to investigate tin selenide because its interesting crystal structure makes it a poor heat conductor – a property he hoped to learn from. Heat travels through a material as vibrations in the structure, so the more rigid a material is the better it conducts heat. “Tin selenide has a layer structure and each layer is corrugated like an accordion. We thought maybe this will make the material so soft that it might have a very low thermal conductivity, and we could do some neat fundamental science,” he says.

Sure enough tin selenide showed the properties that Kanatzidis had predicted. “Then we measured its electrical properties just to complete our measurements – and that’s when we were surprised to find that actually the material has very high thermoelectric power,” he says.

The discovery opens a world of possibilities, says Joseph Heremans, a thermoelectrics expert at Ohio State University – and not just to keep our gadgets running for longer between charges. Thermoelectric devices could replace turbines at power plants or help power electric cars. And with no moving parts, they would “work forever”, says Heremans. “To become comparable, say, to a car engine, you would need a ZT of about 3. Well, Mercouri Kanatzidis gets us there. 2.6 is fantastic!”

Kanatzidis is confident that, by tweaking its structure, his group can improve the ZT of tin selenide even further.

“It kind of makes you wonder how many other materials are out there, others we will be surprised by in the future,” Kanatzidis says.