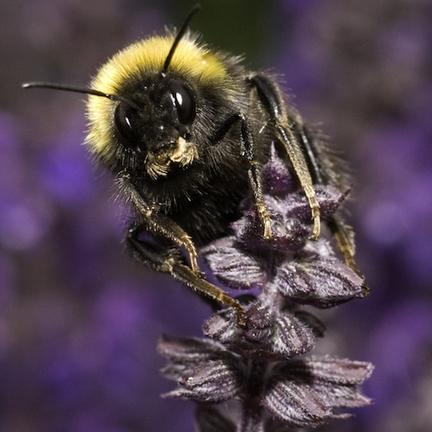 The more glitz, the better. That’s the animal kingdom’s motto when it comes to attracting a mate – think flamboyant peacock tails and butterfly wings. But not so in the plant world, it turns out.

Cambridge researchers have discovered that to attract pollinators, some flowers strike a delicate balance between being flashy and letting their true colours show.

Some plants, such as hibiscus and tulips, go to great lengths to be noticed. On their petals, above their natural pigment, they produce an uneven layer which bounces light around, changing the petals’ hue.

This iridescence, similar to that seen on soap bubbles, increases the petals’ likelihood of being spotted, scientists have found, and could give especially short-lived flowers the edge in reproduction. Iridescent Hibiscus trionum flowers, for instance, only bloom for up to three hours before they wilt, so they need attention fast if they are to reproduce.

But why these flowers are only slightly iridescent – nowhere near as bright as iridescent insects such as the glamorous Cotton Harlequin Bug – has puzzled scientists. Surely the flashier, the better?

They measured how long it took bumblebees to find these flower targets. As they expected, the bees found the iridescent flowers – no matter how iridescent – much more quickly.

They then tested the bee’s ability to distinguish colour, which bees do after they memorise the colour of flowers loaded with nectar. When trained to find petals that were perfectly iridescent, the bees got confused – often visiting similarly coloured flowers that contained no nectar at all.

On the other hand, the bees easily pinpointed the juiciest flowers when petals that were only slightly iridescent,

There’s a trade-off, the authors argue. Iridescent plants have evolved to be flashy enough to catch the bees’ eyes, but tone it down enough to show the colour underneath. This ensures bees find, and come back to, the flowers worth their while.

“Bees are careful shoppers in the floral supermarket, and floral advertising has to tread a fine line between dazzling its customers and being recognisable,” said study author Lars Chittka.

“To our eyes most iridescent flowers don't look particularly striking, and we had wondered whether this is simply because flowers aren't very good at producing iridescence,” co-author Beverley Glover added. “But we are not the intended target – bees are, and they see the world differently from humans.”