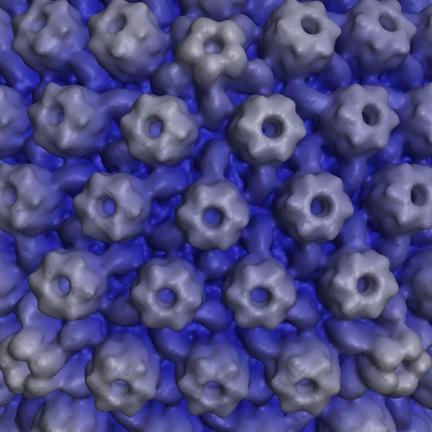 A reconstruction of a herpes simplex virus capsid, based on data from electron microscopy studies. Credit: University of Wisconsin-Madison

We all know catching a virus can ruin a holiday. But criminals now have another reason not to pick one up.

A team of US and UK researchers discovered different herpes virus strains in a single individual, which they believe is a record of the person’s travel history. They suggest sequencing viral DNA may one day become a useful forensic tool.

If you live in the US or Europe, there’s a more than 60% chance you have herpes. That’s the herpes simplex virus 1, or HSV-1, a lifelong infection which can cause common lip cold sores and is in most cases picked up during childhood.

The strain of HSV-1 a person carries depends on where they live. The authors of this research previously showed the virus has a different genetic composition depending on whether it originates in Asia, Africa or Europe/North America.

In this study, the team sequenced the viral DNA from the cold sores of a US volunteer. They discovered this person hosted not one, but two strains of HSV-1 – one common in Europe or North America, and one common in Asia. The researchers believe this individual became infected with the Asian virus during their military service in the Korean War in the 1950s.

Because more than one strain can be carried in the same individual, the scientists say viral DNA could reveal where a person has been – a little like a molecular passport.

So far, multiple strains have only been discovered in a single individual, but the team believe it’s possible more people unknowingly have their life history stamped into the viruses they carry.

The authors are now planning to use more sensitive sequencing methods for a better picture of how HSV-1 strains differ.

The work adds to a growing momentum in microbe forensics. Scientists recently estimated time of death of decomposing cadavers by analysing bacteria and fungi on the skin, and traced germs on individuals’ shoes to different locations.

This research suggests forensic scientists could in future sequence virus DNA to link a criminal to a location.
“Forensic virology could be on the way in the same way in which we use genetic fingerprinting of our human DNA to locate perpetrators at the scene of a crime and to help trace the relatives of unidentified bodies,” Gatherer said.

The research was published in the journal Virology.