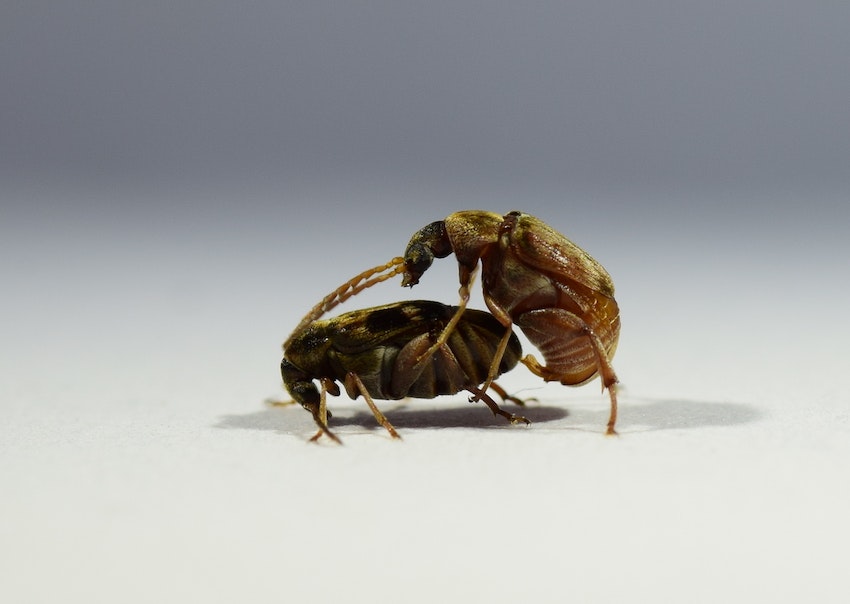 A female (lower left) and male (top right) Callosobruchus maculatus mating. The mating typically lasts for 2-5 minutes during which the male transfers 40,000-60,000 sperm in an ejaculate weighing about 3-5% of his own body weight. Credit: Mareike Koppik

Peering into the private lives of beetles has revealed that males who face tougher competition for females risk having offspring with more genetic mutations.

Researchers at Uppsala University made the discovery in the beetle species Callosobruchus maculatus.

“The hypothesis is not new in itself, but there have been few experiments conducted to test it,” says David Berger from Uppsala University, Sweden. “This is where we hope our study can contribute to an important piece of the puzzle.”

When several animals or insects mate with the same female, the resulting competition between sperm to fertilise the female’s egg causes sexual selection so the more prolific and competitive males win.

But the researchers wanted to test if increasing competition could also lead to more harmful mutations.

In experiments, male beetles were exposed to radiation in order to damage their genome.

The researchers then followed their offspring and discovered that males kept in groups, creating risk of sperm competition from a love rival, had offspring with more harmful new mutations than those that lived alone.

“Even if the direct effect of sperm competition is to increase the number of mutations in offspring, the paradoxical long-term effect of sexual selection may be a lower rate of mutation,” says Berger.

The researchers say their study explains both mechanisms play important roles in how genetic variation arises, in turn affecting the potential for evolutionary adaptation.

The study is published in the journal Nature Ecology & Evolution.