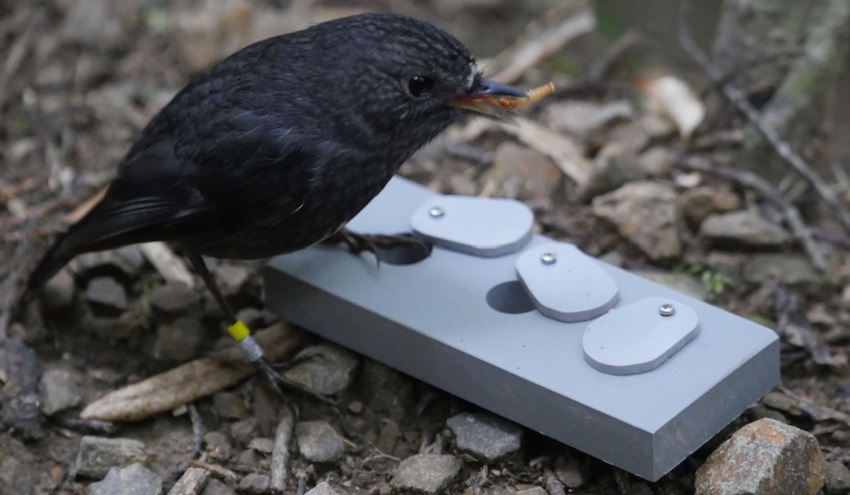 Not only can you teach a wild bird new tricks, but they can remember it nearly two years later, according to research with North Island robins in New Zealand, published in the journal Biology Letters.

With environments increasingly being altered by humans, these skills are even more important; yet few studies have investigated whether wild animals can remember new food locations or threats over time.

Rachael Shaw, from the Victoria University of Wellington, had previously taught the robins (Petroica longipes; toutouwai in Māori) to peck open lids by hiding food rewards – very useful for testing a range of skills such as spatial memory and colour discrimination.

She noticed that she didn’t need to retrain the birds between experiments and saw an opportunity to test if they could still remember how to find the food after a longer time interval – at least one full annual breeding cycle.

Having originally taught 64 birds at Zealandia Wildlife Sanctuary the food-finding trick using behaviour shaping, she and co-author Annette Harvey retested 32 of them up to 22 months later, as well as 17 untrained birds for comparison.

The trained birds clearly retained the ability to find the food reward – a mealworm – 10 to 22 months after they had last performed the task, demonstrating targeted, spontaneous pecking at the lid to open it.

In contrast, the naïve birds paid little or no attention to the apparatus and failed to peck at any of the lids – even though they were happy to eat near it or directly from it, confirming they weren’t avoiding the apparatus.

“Although we already knew that many species have excellent long-term recall for behaviours that fall within their natural repertoire,” Shaw says, “this reveals a surprisingly accurate long-term memory for a new skill that was learned from a human experimenter.

“If we can explore this long-term recall ability in other contexts, for example when birds are taught about the threat of an invasive species, then it could have important applications in terms of helping toutouwai to cope with new threats.”