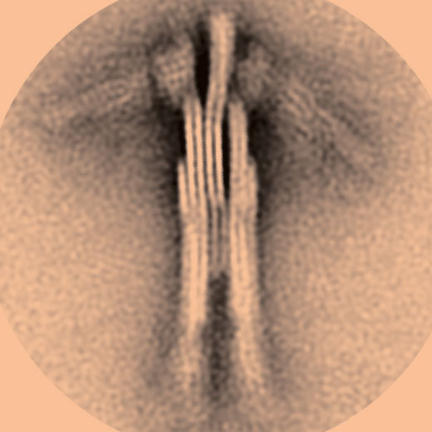 It carries the code for life, but that’s not all DNA is useful for. Researchers at Munich Technical University have been playing with nanoscale “bricks” made of the ultra-stable material, and shown that like tiny Lego pieces it can be stacked, slotted – and even made to move. The microscopic dancing robots they built from DNA, published in Science last month, might be no more useful than a toy. But the DNA design principles the robots were built to demonstrate may one day have serious applications – from drug delivery systems built from DNA that target a particular site in the body, to nanoscale factories filled with DNA machines that churn out the drug to be delivered.

Long strings of DNA carry the blueprint for life – and they are resilient. A single strand of DNA is made up of four different nucleotide “letters” – A, C, G and T – that together spell out our entire genetic code. These nucleotides like to pair up – A with T, C with G – and so two complementary strands of DNA will pair up like a zipper to form DNA’s double helix – a structure so sturdy it can even survive a blast into space.

Nature makes use of DNA’s stability. Immune cells called neutrophils pump out DNA-filled goo to trap invaders, and bacteria use DNA to reinforce their slime shields, protecting them against antibiotics. In the lab, researchers have also made use of DNA’s structural properties to build various shapes, a technique called “DNA origami”. It was DNA’s versatility that lured lead author Hendrik Dietz from a career in protein engineering to DNA origami: “It impressed me so much – there’s so much you can do with it!”

But the “zipper teeth” that make DNA so stable are also one of DNA origami’s great weaknesses. Once DNA base pairs are zipped up, they don’t easily come apart. And designing a nanomachine requires moving parts that can carry out a function. Dietz and his team set out to find a way of making DNA structures that could move.

So the team looked to nature for inspiration. DNA strands are held together by the strong base pairing interactions of A, C, G and T. Weaker ‘stacking’ forces help the pairs of strands coil into DNA’s double-helix shape. This stacking force helps keep base pairs in a DNA helix floating above each other, ensuring the rungs of the DNA ladder are neatly spaced.

Dietz and his team have now designed and built DNA origami structures with moving parts that exploit these weak stacking interactions. In one example, he created a nanoscale pair of scissors that repeatedly snap open and shut. Below 25°C, stacking interactions between the two blades of the scissors hold the blades shut. But when the researchers raised the temperature to 50°C, this weak interaction is overcome and the blades pop open. And the structure proved to be highly robust. The team was astonished to find their DNA scissors could repeatedly open and close every three minutes for four days without breaking. “We couldn’t believe it. We had to stop the experiment because we ran out of [computer] memory,” Dietz says.

Dietz has also designed a tiny army of DNA robots. Multiple stacking interactions hold the various bits of the robot’s body together: when he dropped the necessary DNA building blocks into a solution, the robots self-assembled like a Lego model that builds itself.

So why should we get excited about dancing nanorobots in test tubes?

Baker admits the field of DNA origami started out as a way of testing how much the structure of DNA can be manipulated. But Dietz points out, “we make logs of wood into chairs – not what nature intended wood for, but we still use them”. His approach has expanded the DNA building toolkit – his DNA blocks could now become the wood for atomic-precision construction.

In an accompanying article in Science, Harvard bioengineer William Shih writes that DNA “may one day rival the functional sophistication of the biomolecular machines of the cell”. Dietz has no doubt his method will help: “We’re moving full speed ahead.

More on this topic from Cosmos: Did our DNA arrive from space?