Home ■ Core Sciences ■ Biology ■ Lab talk: another reason to save the whale 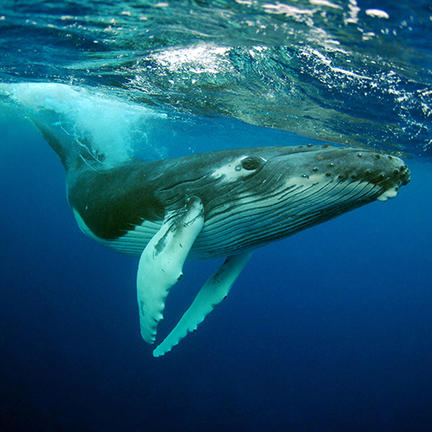 Commercial whaling has killed off nearly 1.3 million whales, including blue, fin and humpbacks since the early 1900s. This calamity has disturbed the ocean’s iron cycle with knock-on effects for us.

The cycle starts with phytoplankton, single-celled algae that take up carbon dioxide from the atmosphere and produce oxygen during photosynthesis. Marine phytoplankton can produce more than 50% of the air’s oxygen. In essence, every second breath you take comes from marine phytoplankton.

Iron is essential for the photosynthetic machinery in phytoplankton. But large areas of the Southern Ocean are iron deficient. And this is where whales come in – they recycle iron.

Phytoplankton take up iron from seawater and are eaten by small, abundant crustaceans called krill. (Uneaten phytoplankton sink to the bottom of the ocean when they die, taking their carbon and iron with them.) The krill are devoured by baleen whales, a family that includes blue, fin and humpback whales.

During the Southern Ocean’s summer feeding season, an adult blue whale eats up to two tonnes of iron-rich krill per day. Fully grown adults don’t need much unless they are pregnant or injured – they defecate the unwanted iron they consume. The fluid-like faeces rise to the surface and disperse, providing fertiliser to the sun-drenched surface waters.

We at the University of Tasmania have found baleen whales recycle large amounts of iron. More than 10 million times more iron is concentrated in their faeces than in seawater.

Whales were once important to the Southern Ocean’s iron cycle; their demise may have led to a less productive sea. Allowing whale populations to recover would boost the amount of iron in seawater as more krill are turned into liquid fertiliser. This would lead to more phytoplankton growth, which could suck up more atmospheric carbon dioxide.

And that’s good for everyone.

Lavenia Ratnarajah is a marine biogeochemist at the University of Tasmania