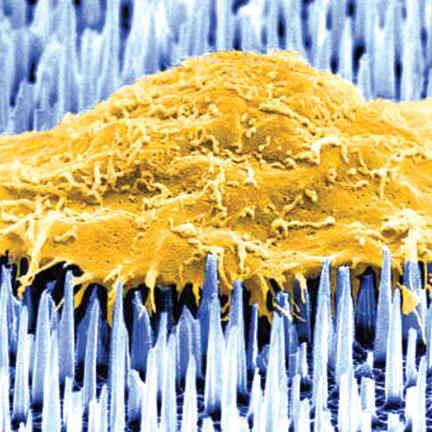 The image shows a single human cell (brown) on a bed of nanoneedles (blue). This image was taken by the researchers using electron microscopy.

A person with severe burns could one day be wrapped in bandages lined with invisible needles say researchers at Imperial College in London. The team has developed sheets of silicon coated with nanoneedles that could boost the healing capacity of tissues by puncturing thousands of cells at once, delivering a shot of DNA into each one.

The silicon nanoneedles were made by Molly Stevens and her team, who published their results in Nature Materials in March. Preventing unsightly scars from burns is one of their possible applications.

“It’s a very powerful way of accessing the inside of the cell,” says Mark Prausnitz, chemical engineer at the Georgia Institute of Technology.

One reason for introducing new DNA into cells is to reprogram the way they respond to damage. But placing DNA inside cells is tricky. Viruses are nature’s experts at slipping DNA into unsuspecting cells, and some researchers have used modified viruses as a DNA delivery service – but the viruses can mix in their own genes, which can be dangerous to the patient.

Alternatively, DNA can be injected using a syringe. But delivering DNA this way can only be done one cell at a time – hardly efficient for reprogramming whole tissues, such as burnt skin or torn muscle.

So Stevens and her team developed silicon sheets coated with nanoneedles which can inject DNA into a whole layer of cells at once.

Thanks to the techniques developed by the computer industry, silicon can be shaped with nanoscale accuracy. The team bombarded silicon wafers with charged particles to partially etch away the silicon and leave a surface bristling with tiny needles. Through an electron microscope, Stevens’ material looks like a bed of nails, each nail one thousandth the width of a human hair and one thousandth the length of a grain of rice.

Each nanoneedle contains tiny pores that can be filled with DNA – for example, DNA that codes for a signalling molecule called VEGF. Cells exude VEGF to encourage blood vessel growth around them. VEGF is released naturally during embryonic development, and also after injury.

Could the nanoneedles upload this DNA to cells? To find out, the team implanted DNA-loaded nanoneedle sheets on to muscle tissue in mice. After one week, there was a six-fold increase in the formation of new blood vessels in the muscle around the implant – and the researchers saw no signs of inflammation.

The successful test suggests the sheets of nanoneedles might be used to help organ transplants take hold. Transplanted organs often struggle integrating into the body as they take time to build blood vessels. Nanoneedle-assisted genetic programming could help. After delivering their DNA, the minute, porous silicon needles would be broken down by the body within four days and excreted as non-toxic orthosilicic acid.

“We are excited and focused on taking this material forward,” says Stevens. The material is made by etching nanoneedles on to 8-centimetre silicon wafers. Her team is working on flexible bandage versions that could be more easily applied to the skin or inside the body during surgery, or after an accident such as a burn.

How soon could we see Stevens’ nanoneedles in the clinic? Prausnitz is cautious. “It’s the new technology at the party – it looks really good and has promise. But limitations may be found over the course of further development.” He is, however, optimistic the porous nanoneedle material could find many uses – perhaps being loaded up with drugs or antibodies as well as DNA.