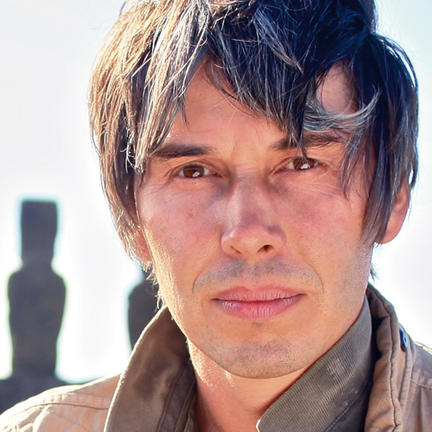 It’s not often you see Professor Brian Cox, the rock star turned physicist, looking downwards – the stars and beyond into the farthest corners of the Universe are usually his thing. But in the DVD series Human Universe he combines his first love with a new one. His personal evolution, if you like, into the world of biology.

The five-part Human Universe is the story of us – Homo sapiens – and our place in the cosmos, and tries to tackle some big (if ultimately unanswerable) questions. “Why are we here?” “Are we alone?”
“What is our future?”

But despite the more down-to-Earth slant of the series compared with his previous hits Wonders of the Solar System and Wonders of the Universe, Cox is at heart a cosmology tragic. And while he is his usual charming and engaging self on the floor of the Rift Valley, or in close encounters with some particularly bright baboons, his eyes only really light up when he talks about the stars.

And it is the stars and mankind’s desire to reach them on which Cox bases his premise: that we are a “special” species that has exceptionally advanced in a little more than 200,000 years from ape-on-the-make to space travellers.

Cox has received some criticism for this. Biologists point out that humans are good at some things but then giraffes are exceptional at being giraffes and bandicoots the best animals at being bandicoots bar none.

But we can put that aside. Although chimpanzees and even the cosmonaut dog Laika went into space before us, we are the only animals to have worked out how to leave the Earth. So it is inevitable that we should question our place in the unimaginable vastness of the Universe.

And as the wonderful science communicator he is, Cox is an excellent choice to raise those questions, even if he does not necessarily provide the answers.