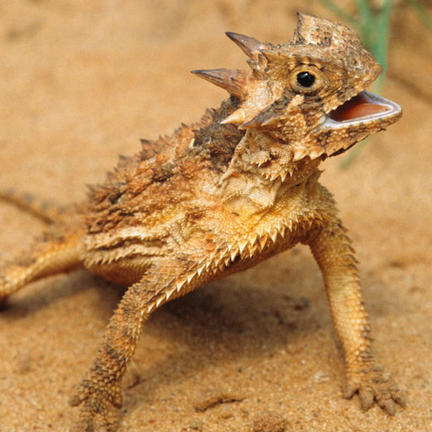 The spiky skin on a desert-dwelling Texas horned lizard delivers more than bad-boy looks. A complex network of micro-channels runs between its scales. The channels capture dew and desert rain, delivering the precious liquid directly to the lizard’s mouth, biologist Philipp Comanns, at Germany’s RWTH Aachen University and his colleagues have discovered.

The researchers also showed they could copy the lizard’s trick, creating a synthetic material etched with channels that can passively draw water across its surface in one direction. They reported their discovery in The Journal of the Royal Society Interface in July.

Reptile specialist Wade Sherbrooke, director of the American Museum of Natural History’s southwestern research station in Arizona, says the work is “very exciting. They’ve made a model to see how it works, and have new insights on how a system might move water directionally”.

The creatures are native to the southwestern US and northern Mexico. They hibernate for six months, emerging in spring – when three months of drought begins. “April to June are the driest months,” Sherbrooke says. “If there is any rain, it’s light” – barely enough to moisten the sand, and certainly not enough to form a puddle where a lizard might drink.

So when a Texas horned lizard senses rain, it stands outside so the splashes can dribble between and under its scales. As the lizard moves its jaw up and down, water funnels towards its mouth.

Comanns’ research showed the lizards exploit a phenomenon known as capillary action. If you’ve ever dripped water on your jeans and noticed how it spreads, that’s capillary action. Adhesive forces between the water’s surface and the walls of narrow channels in the denim fibres pull the liquid along.

On jeans, the droplet spreads evenly. But Comanns has discovered that the channels on a Texas horned lizard’s skin are one-way streets. Drips of water always flow faster towards its mouth.

By examining channels in a dead specimen’s skin under a microscope, the researchers discovered one of the lizard’s tricks. The diameter of each channel repeatedly narrows and then flares along its length, effectively funnelling the water towards the mouth.

When the team etched this same pattern of interconnected capillaries into a slab of plastic, the water flowed across quickly in one direction as it did on the lizard’s skin – sometimes faster, if the angles between the channels and their connections were pointy. “With nature, you tend to find curved lines rather than sharp corners,” Comanns says.

Copying the patterns of the Texas horned lizard’s unique skin could be handy for engineers, he adds. By laser-cutting unidirectional capillary patterns on to machinery, for instance, oils and lubricating fluids can be directed to specific parts – no matter where it was squirted.

So what more secrets will researchers uncover about these spiky desert critters? In 2004 Sherbrooke was part of the team that discovered the Texas horned lizard – and also Australia’s thorny devil – use capillaries to trap rainwater on their skin. But the close cousins of each lizard don’t seem to do it, he says. The researchers argued that the two lizards independently “evolved this system of rain harvesting”. Sherbrooke suspects the thorny devil might also have mastered one-way capillary flow, although it hasn’t been tested yet.

Sherbrooke also thinks the animal’s jaw movements help move water along, but he hasn’t yet worked out how. He’s also interested to know if Texas horned lizards can collect and drink water while hibernating underground.

Each discovery throws up more questions, he says: “You look at these things and go ‘wow’. There’s something special and strange about them, that’s for sure.”