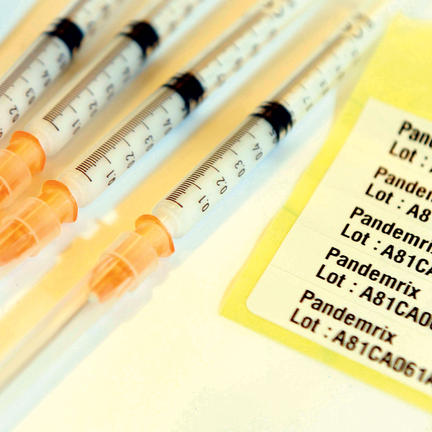 You might feel a bit sleepy in the day or two after a flu jab – after all, drowsiness is a common side effect. But the vaccine Pandemrix, administered to more than 30 million people in the European Union during the 2009 swine flu pandemic, took the symptom to the extreme. It provoked narcolepsy in a few recipients – a debilitating disorder that can send sufferers to sleep in an instant. How the vaccine induced this has been a mystery until now.

Stanford University’s Lawrence Steinman and colleagues have found that for a few genetically unlucky people, antibodies produced by the Pandemrix jab locked on to a protein involved in the sleep-wake cycle. They reported their findings in Science Translational Medicine in July.

So should we be worried about our next flu vaccine?

No, says Robin Anders, biochemist and vaccine researcher at La Trobe University in Melbourne: “Where you do get adverse events to vaccines, it’s usual that those events are much more common after the infections.” In other words, susceptible individuals would be more likely to develop narcolepsy after contracting the swine flu, than by receiving the little bit of flu protein used in the vaccine. “So it’s not a reason for not using the vaccine,” Anders adds.

The swine flu pandemic of 2009 tore around the world, killing up to 250,000 people in only a year. Newly developed vaccines were quickly rolled out, but in 2010, doctors noticed an unusual increase in narcolepsy diagnoses. Scientists traced them to GlaxoSmithKline’s Pandemrix vaccine, which was distributed to more than 30 million people in the European Union. The narcoleptic effect was rare, though – in Finland, for example, fewer than 70 new cases of narcolepsy in children were diagnosed. That’s six in every 100,000.

Nevertheless, Pandemrix was pulled from the shelves.  Another vaccine developed against the swine flu, Novartis’s Focetria, was made from a different strain of the swine flu virus and didn’t bestow the disorder. In 2013, Steinman teamed up with Novartis’s then global head of clinical sciences Sohail Ahmed and colleagues in Finland, to examine the differences between the two vaccines. Could the culprit be found and avoided in future flu shots?

Steinman’s team analysed the antigens – the bits of flu virus protein – used in each vaccine. Immune cells in the body called B-cells recognise the antigens as foreign and make antibodies against them, priming the immune system in case the real disease invades.

The team found subtle differences between the protein fragments in the two vaccines – including in the influenza’s “nucleoprotein”, part of the virus’s replication machinery. This protein, unfortunately, happens to be similar to another protein produced by the body, called hypocretin receptor 2. This protein is found on the surface of nerve cells in part of the brain called the hypothalamus, where the hormone hypocretin that helps to keep us awake is produced.

Steinman suspected that antibodies the body produced against the nucleoprotein in the vaccine might also stick to hypocretin receptor 2, disrupting its function. Testing the blood of 20 patients who received Pandemrix and went on to develop narcolepsy, Steinman’s team found 17 had antibodies that bound to hypocretin receptor 2. The other three patients may have had low levels of these antibodies that couldn’t be detected. The researchers believe Pandemrix-produced antibodies latched on to the hypocretin-producing cells in the hypothalamus and blocked production of the hormone, disrupting sleep patterns.

Focetria turned out to have much less nucleoprotein in it – a quarter of that found in Pandemrix – which was not enough to produce antibodies against the hypocretin receptor, Steinman showed.

Pandemrix alone did not kick-start narcolepsy. It turned out the disorder only emerged in people with a certain version of another immune system protein known as HLA-DQ. How this protein contributes to narcolepsy onset is still unknown.

Had these predisposed individuals been infected with swine flu instead of receiving the Pandemrix vaccine, their bodies would have produced the same antibodies – with likely the same damaging response. Other vaccines are known to carry risks for some individuals, who would be particularly affected by the disease in question. Measles vaccines for instance carry the risk of an autoimmune condition in around three in every 100,000 people vaccinated. But a person is five times more likely to develop the condition after contracting the potentially fatal measles.

Melina Georgousakis, public health researcher at the University of Sydney who has developed vaccines, is confident the study will change how influenza vaccines are developed in the future. “I don’t think we’ll ever be able to have a ‘risk-free’ vaccine – just like for any other medication,” she says. “But research like this helps ensure the benefits of vaccination are much greater than any risk.”

Anders agrees. He says he thinks developers will now avoid antigen mixes with high levels of nucleoprotein. Researchers already screen candidate vaccines for other known cases of cross-reactivity. A streptococcus bacterium, for example, contains a protein with a similar structure to one found in the heart, and so streptococcus vaccines must pass rigorous lab tests to make sure they don’t trigger an immune response that attacks heart cells.

“It’s a challenge but I think we can make safer vaccines – this research might be one of the milestones on that path,” Steinman says. In the meantime he will continue to roll up his sleeve for his yearly influenza shot. “What would happen in an infection would be worse.”