Home ■ Core Sciences ■ Biology ■ How a dottyback catches his damsel 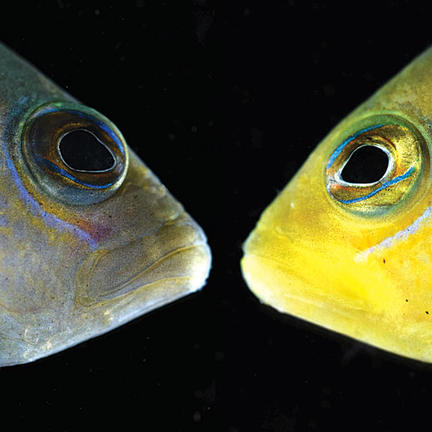 Dottybacks change color to imitate the damselfish in their surroundings and sneak up on their young.

A tiny predator on the Great Barrier Reef has been found playing dress-ups to sneakily attack its prey. Fabio Cortesi and his colleagues at the University of Queensland discovered the dusky dottyback fish changes colour to fool its victims into thinking it’s one of them – then eats them. They published their work in the journal Current Biology in March.

“It’s an exciting discovery and a strategy that makes a lot of sense,” says Devi Stuart-Fox, evolutionary biologist at the University of Melbourne. While animals are known to change colour to suit their environment, warn off predators or communicate with each other, the dottyback is the first species shown to change colour to match its prey.

Dottybacks are ravenous, solitary hunters. A single dottyback is eight centimetres long but can feast on up to 20 fish a day – their favourite being young damselfish. On the Great Barrier Reef, they are yellow or brown – yellow dottybacks tend to live among bright yellow corals, whereas the brown variety is found in dead, brown coral rubble. Similarly, their damselfish prey are also either yellow or brown, depending on their surroundings.

But while damselfish evolve to blend in with their environment and have a fixed colour, dottybacks can change their look. Cortesi and his team wanted to know what drove this colour switch – the coral or the prey? So they placed schools of brown damselfish among yellow coral, and schools of yellow damselfish among brown coral, dropped in dottybacks of different colours and watched what happened.

Cortesi found dottybacks that matched the colour of their prey were up to three times more likely to snap up a meal.

And this costume change had big benefits. Cortesi found dottybacks that matched the colour of their prey were up to three times more likely to snap up a meal. “We were surprised the dottyback gained such a huge advantage,” Cortesi says.

Eventually, damselfish cotton on to the dottyback’s con trick and start to shun the imposters. But because the dottyback can change coats, it can move on to a new damselfish school, adjust its colour and repeat the trick.

So how do dottybacks change colour? Colour shifts are seen all over nature – the flamboyant chameleon reorganises nanocrystals in its skin and some squid change the shape of their pigment cells to blend in with the shades of the ocean floor within seconds.

But for dottybacks, change doesn’t happen so quickly. The researchers assume that when a dottyfish sights its damselfish prey, a message is sent from its brain – perhaps via nerves or perhaps by hormones – to pigment cells named chromatophores in the dottyback's skin. A dottyback sidling up to some brown damselfish would then ‘switch off’ its yellow chromatophores by drawing the pigment towards a condensed point in the centre of the cell – the first step towards cell death – allowing its brown chromatophores to show through. It takes a week or two for the yellow cells to die off and more brown cells to grow.

But the team also discovered some dottyback cells that contain both yellow and brown pigments, which is “not very common” according to Helen Sköld, zoologist at the University of Gothenburg and co-author of the study. “In the dottybacks it might be that there’s a change inside the pigment cells themselves,” Sköld says. If their pigment cells can change colour instead of dying off to allow another pigment to take hold, the dottyback may have found a new way to change colour – “but that’s a guess at this point,” Sköld adds.

So are dottybacks unique in using colour change to catch more prey? Other tropical fish species known to come in different colours would be a good place to start looking for the same strategy, Stuart-Fox says. “It wouldn’t surprise me if this strategy of changing colour to mimic prey was more common,” she says.

More on colour-changing animals in Cosmos: How the chameleon glows in technicolour