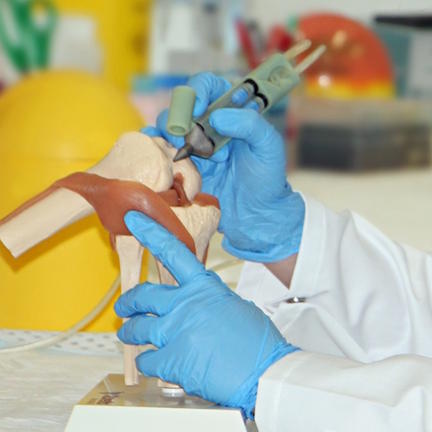 Surgeons may one day wield 3-D printing pens as much as they do scalpels, thanks to new work by a team of scientists in Australia.

The "biopen" – a device that allows surgeons to "fill in" wounded areas with scaffolds full of stem cells, which go to work fixing the injury – was unveiled this week in the journal Biofabrication.

3-D printers have been used to build body bits before. But sometimes surgeons don't know what shape to mould an implant until they're in theatre. This is particularly the case with knee cartilage repairs.

So the biopen's concept is simple: take fat cells, which most people won’t miss, and turn them into stem cells. Then "draw" layers of stem cells in the damaged cartilage.

Lead author Cathal O'Connell*, from the ARC Centre of Excellence for Electromaterials Science, says there were two reasons the team focused on cartilage.

It's a simple tissue that doesn’t need a nerve or blood supply.

And second, damaged knee cartilage is a very common problem. You might scratch or nick the cushioning cartilage but without nerves telling you it’s hurt, you won’t know.

The cartilage in your knees and ankles doesn't grow back. And over time, a nick turns into a tear, and the cartilage becomes brittle and breaks down.

“You could be walking around on it for years while the problem grows,” O'Connell says. "Then it turns into osteoarthritis" – an afflication affecting more than 80% of Americans over 65 years old, and leading to 750,000 knee replacements each year.

Most cartilage nicks are diagnosed when patients are scanned using MRI for other joint issues. But the only way they're fixed is pretty extreme – a surgeon drills into the underlying bone to release some stem cells which then, hopefully, fill the gaps. “It’s invasive and horrible, but there’s nothing better at the moment,” O’Connell says.

The Melbourne team's biopen takes a much gentler approach. It allows surgeons to sculpt customised implants as they operate.

Stem cells sit in hydrogel bioink, made from gelatin and hyaluronic acid. The inks are set with ultaviolet light, and the scaffold is built layer-by-layer in the site of the wound.

The hydrogel scaffold protects the stem cells as they get to work, growing new cartilage. Over time, the scaffold dissolves leaving the healthy tissue in place.

The researchers found more than 97% of human stem cells were still alive a week following printing. Because the implanted cells come from the patient, tissue rejection isn't a problem. And eventually, O'Connell says, the biopen will be able to print tissues other than cartilage, such as skin on a burn.

Claudia Di Bella from St Vincent's Hospital in Melbourne was the first surgeon to test the device.

“Handling the biopen was comparable to handling any other surgical instrument and it gave the ability to fill the defect in a way completely driven by surgical need,” she says.

“The potential of its use in orthopaedics and in many other surgical fields is unmatched.”

The biopen itself is 3-D printed from medical-grade plastic and titanium. Watch it in action below:

*Cathal O'Connell is a regular contributor to Cosmos magazine.