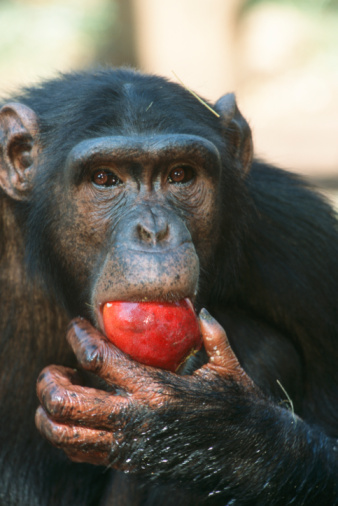 Why do humans and other primates have such big brains? The answer, according to a team of anthropologists at New York University, is fruit.

The finding arises from the latest and largest attempt to date that seeks to settle a decades-long stoush between rival anthropologists.

On one side are proponents of what’s known as the “social brain hypothesis.” This theory suggests that big brains evolved to accommodate complex social structures.

As the size of a species’ social group increases, the argument runs, so too does the need for members to have the requisite smarts to forge cohesive relationships within the group.

“This has come to be the prevailing view,” says James Higgins, a co-author on the new study, “but our findings do not support it.”

Instead, his team’s analysis of over 140 different primate species bats for the alternative view: that what a species eats is a more important evolutionary driver of big brains.

“Fruit is patchier in space and time in the environment, and the consumption of it often involves extraction from difficult-to-reach-places or protective skins,” says Alex DeCasien, who led the study.

Foliage-munching, on the other hand, isn’t so demanding.

“Together, these factors may lead to the need for relatively greater cognitive complexity and flexibility in frugivorous species,” he says.

“That makes sense,” says Roger Seymour, a comparative physiologist from the University of Adelaide, who doesn’t belong to either camp of the debate. Fruit eaters, he adds, “need to remember where the fruit is and what trees are going to be fruiting at different times.”

However, when it comes to intelligence – or ‘cognitive capacity’ – Seymour cautions against using brain size alone as a proxy, as the study has done. His own recent work has shown that cognitive capacity goes hand-in-hand with an increase in how much blood is pumped into the brain, presumably to meet the increased metabolic demands.

“Cognitive ability is probably closer related to brain blood flow than it is to size,” he says. “It would be nice to see if there was a correlation between blood flow to the brain and the diet of primates to either support or refute their data,” he says.

Such an analysis could further bolster the diet argument, but it’s unlikely the social brain camp has had its final say in the matter. The study was published in Nature Ecology & Evolution.