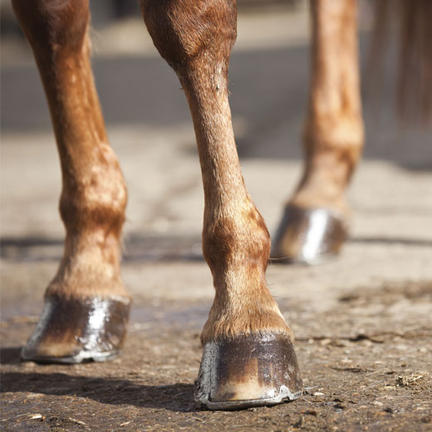 “Prevention is better than cure” is a well-known medical maxim – and when a disease has no cure, prevention is essential. Laminitis, the second-biggest killer of horses today, is a crippling, incurable affliction in which the connective tissue between a horse’s foot and hoof begins to fall apart.

“Eventually a pony with laminitis will lie down and won’t get back up,” says Queensland University of Technology equine physiologist Martin Sillence. “The only treatment at the moment is painkillers – essentially palliative care.” So Sillence and his team set out to stop the disease from taking hold.

In the past it’s been difficult to identify the horses most at risk. First described by Aristotle 2,000 years ago as barley disease, laminitis afflicts all horse breeds and up to 30% of older ponies. And while it can be brought on by infection or standing too long in transport trailers, it’s most commonly caused by a metabolic disorder that throws the animal’s insulin levels out of whack.

In humans, diabetes takes hold when the pancreas stops producing insulin. In horses, laminitis sets in when the horse’s pancreas goes into overdrive, pumping out insulin until it reaches toxic levels.

Sillence found the process starts in the gut. When healthy horses are given sugar, either as part of their diet or intravenously, they’ll have a normal insulin response – a burst from the pancreas, then back to normal within a couple of hours or less. In horses at the early stages of metabolic syndrome, intravenous sugar can also produce a normal insulin response. But when these horses eat the same amount of sugar, their insulin levels go “through the roof”.

“We’ve found there are hormones released from cells in the gut called incretins that sense when glucose is on its way,” he says.

For a reason Sillence does not yet understand, some horses produce much higher levels of incretins, and this “turbocharges the pancreas”.

When a horse’s insulin levels stay high for long periods, cell receptors are activated in the foot that cause the cells to divide uncontrollably, weakening connective tissue between hoof and bone until they start to separate.

So Sillence and his team developed a diagnostic blood test that can catch horses with elevated insulin levels before outward symptoms start to show. Once a horse has been designated to be high risk, it can be placed on medication to stop its insulin levels from spiking.

And as with human diabetes patients, weight loss can help. Sillence’s colleague Melody de Laat encouraged fat ponies to run up and down paddocks by placing a mechanised feed trough at each end that opened and closed at offset intervals. The ponies lost weight and their metabolism improved too.

“The work we’ve done has shown that we can actually prevent the disease with very good success when we can get insulin levels down,” Sillence says.

The global market for laminitis prevention is around $70 million a year – “small beans compared to human diabetes”, Sillence observes – but not insignificant.

Preventing the disease before it takes hold will save horses and ponies from a shortened, painful life.