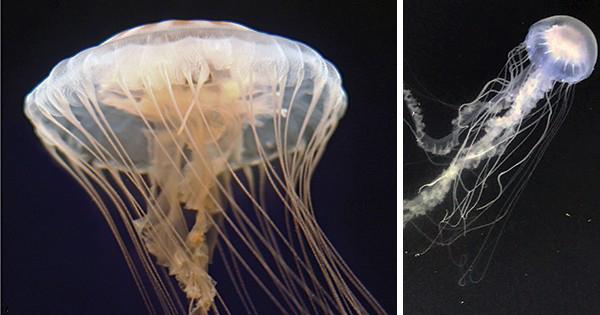 The sea nettle jellyfish – a very familiar sight to beachgoers and swimmers along the east coast of the United States – is not what it seems, new research shows.

Genetic and structural analysis of samples collected across the jellyfish’s range reveal that it actually comprises two distinct species – one which lives in open water, and another that prefers the shallower conditions of bays and estuaries.

The discovery was made by Patrick Gaffney and Keith Bayha of the University of Delaware in the US, by sequencing nuclear and mitochondrial DNA from sea needles.

The results challenged the formal identification of the jellyfish, which was made almost 175 years ago.

“Before DNA came along, people in museums looked at organisms and counted spines and bristles, measured things, and sorted organisms by their physical characteristics in order to identify species,” says Gaffney.

“In the case of this jellyfish, which has been commonly known for centuries, Keith found through DNA sequencing that there were actually two groups.”

Oddly, though, the DNA finding was supported by exactly the sort of looking and counting – called morphological analysis – to which he referred. This indicates, perhaps, the very – if now merely apparent – ubiquity of the sea nettle led generations of marine biologists to be less than rigorous in their observations.

Gaffney and Bayha found several telling – and in hindsight obvious – structural differences between the two species. The ocean-going sea nettle (Chrysaora quinquecirrha) has 40 shortish tentacles, while the bayside species (now called Chrysaora chesapeakei) has 24 long ones. In addition, the ocean species has a larger bell.

“It’s not that I did anything that different, it’s just that no one else looked for a very long time,” explains Bayha.

“Jellyfish are something people don’t pay attention to because they’re fleeting. They come and go, are difficulty to study, and they don’t have hard parts like shells that wash up on shore.”

The research is published in the journal PeerJ.