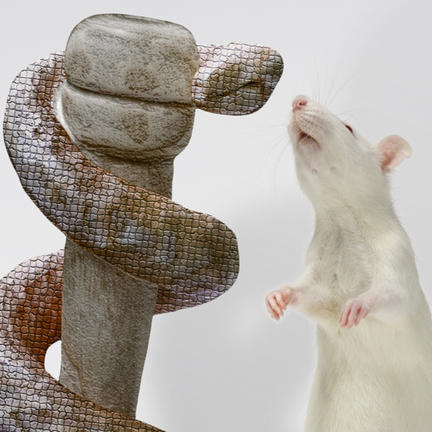 A drug has successfully reversed the physical effects of ageing on brain cells in middle-aged rats, bringing scientists one step closer to understanding – and possibly stemming – cognitive decline in people.

With time, brain cells lose fibres that receive neural impulses. This process, neuroscientists believe, could be linked to the decline in memory and cognitive function that occurs in people as early as middle age.

This study, published in The Journal of Neuroscience, focused on fibre loss in the brains of rats around 13 months old – roughly in the middle of their lifetime.

Researchers based at the University of California, Irvine, attempted to reverse the breakdown of these fibres using a compound called an ampakine, a drug known to enhance alertness and facilitate memory.

Ampakines have previously been shown to reverse cognitive decline in rats, and encourage the development of a key growth factor in the brain.

During the study, researchers set up a group of 10-month-old rats in a stimulating environment, with lots of running space and different objects to explore. Over a three-month period, a group of rats were given the compound ampakine, while the rest were given a placebo.

At the end of the experiment, when the rats reached 13 months old, scientists analysed the brain fibres and cognitive behaviours of both groups, drawing a comparison with those of younger rats.

While the brain fibres of the placebo-fed rats had degenerated, the ampakine-fed rats showed no difference in comparison to their younger counterparts.

The behaviours of the group were also monitored. Researchers placed the rats into a new environment and observed how they acted over a number of days. While the placebo-fed rats spent longer exploring and re-exploring their new surrounds, the ampakine-treated rats settled into predictable behaviours after just two days, suggesting higher memory function.

"There's a tendency to think that ageing is an inexorable process, that it's something in the genes and there's nothing you can do about it," says Gary Lynch, co-author of the paper. "This paper is saying that may not be true."

Before we start drawing Lazarus comparisons, experts are quick to emphasise that more work must be done before the drug can be tested on people.

However, Carol Barnes, a neuroscientist at the University of Arizona, is excited by the findings.

"[The study] is particularly interesting because the drug effect was selective in the brain functions and behaviours that were changed. This is the kind of specificity that could make translation to the clinic possible," she says.

Related reading: Chocolate: decadent, delicious… and good for your brain?